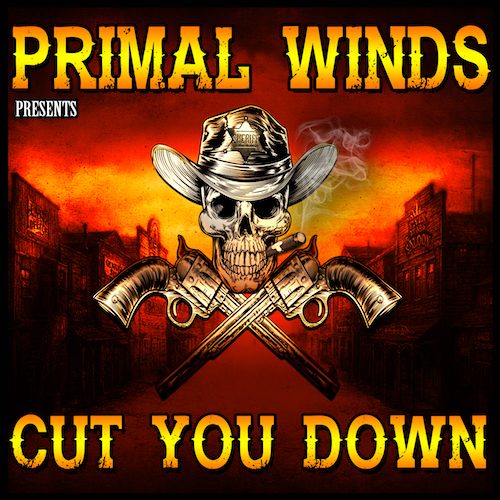 Primal Winds :: Cut You Down

I previously covered Primordial Emcee in 2016. While I was a little burnt out on Hand’Solo Records at the time, I had to admit that Primordial had a decent delivery and a nerdcore style that some would find appealing. It wasn’t “album of the year” material but it wasn’t anything that made me put Hand’Solo on my “return to sender” list either. His release was for better or for worse a middle of the road underground rap album. If he was on tour and you caught him at a club, you’d probably buy a copy of his shit for $5-$10 out of respect. He’s aight.

In the interim Primordial has formed a duo with a producer by the name of Iron Wind and rebranded the duo as “Primal Winds.” According to my man Tom over at Hand’Solo this is actually their third (!) project together. Did he hit me up on the first two? I feel like if I had seen the name Primordial on them I would have checked them out, but perhaps they released those albums independently before being brought into the Hand’Solo fold. A few tracks into “Cut You Down” I’m glad they were. The team has purposefully struck a Western cowboy theme with their cover art, beats AND rhymes. It’s absolutely a gimmick but Czarface is a gimmick too. The difference is whether or not you embrace the gimmick and go all in to make it stick and much like the movie it’s named after “A Fistful of Dollars” absolutely does.

“We’re going +Lock Stock and Two Smoking Barrels+
It’s Primal Wind in your face like new drop top Camaros
Howling at the moon like a bunch of werewolfs
Naked panties come off when they rockin sombreros
Don’t get him pissed, because he’s known to be a brawler
The Junkyard Dog that don’t need a collar
Getting rid of all the wannabeez, you’re just gonna holla
Put your money where your mouth is or +A Fistful of Dollars+”

The title track of the album serves this theme even better. Sampling from the Johnny Cash track of the same name, the song is presented as a tribute to him, and before this exact moment I could never have imagined a rap song doing a good job with the “Man in Black.” I’ve heard this song many times over the years, and I often associate it with the pro wrestler Undertaker, and it’s not surprising that he gets namechecked on the track as a result. I dig it — pun fully intended.

Canadian rap releases can at times be insular to both their benefit and detriment. It’s cliché to see guest verses by Madchild and D-Sisive on these CDs, but with songs as good as “Gunslinger” and “Rising” respectively you really wouldn’t have it any other way. Another thing that pleases me about “Cut You Down” is how they reinforce the theme throughout with snippets of those aforementioned cowboy movies, or as on “Rising” the actual voice of Johnny Cash himself. Even the song titles stick to the script – from “Rattlesnakes” to “Tombstone” to “Mexican Stand Off” featuring Fortunato.

I freely admit this gimmick is not going to be for everyone. The Western movie genre is problematic to put it nicely, and if we’re being honest it was downright racist in its depiction of indigineous i.e. “native” Americans a majority of the time. It also served to glamorize the image of a cowboy in a way that was unrealistic compared to the much less Hollywood and far more menial day to day life of herding cattle and eating a tin of bins around a campfire. Sure there were OK Corrals and gold rushes and shootouts in saloons, but to say that was everyday life in a 19th century Western town would be as naive as saying every day in Vallejo looks like the set of an E-40 video. At the end of the day though provinces like Alberta were one of the last places you could find a genuine “cowboy” as such so it somehow feels right for a Canadian rap group to reclaim what most people would have considered an American tradition.