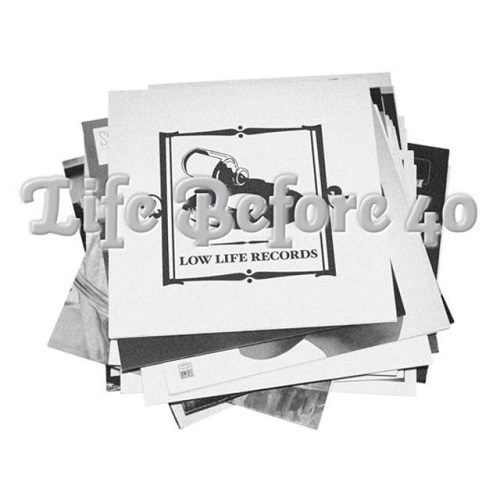 It’s common knowledge that hip-hop has become a worldwide phenomenon. How often do we hear our American emcees shout-out their fans in foreign lands? Major artists coordinate European tours and perform before packed crowds in Japan. Even my man, RapReviews bigwig Matt Jost, reps Switzerland. I get emails from readers from all corners of the globe.

But how much do we, and by “we” I mean apple-pie-eatin’ Yankees, really know about the international scene? It’s one thing to know that hip-hop exists in other nations, but how many of us know who the respected foreign emcees are? Case and point: “Life Before 40”, a “greatest hits” compilation from British label Low Life Records. The title alludes to the commemoration of the label’s 40th release and according to their press release, they’re the “longest established and most highly regarded” label in the UK. Based on the strength of this work, I have no reason to doubt this claim. But I’m curious about what the American equivalent of Low Life would be; a commercial outlet like say, Def Jam, or an independent like a late-â€˜90s Rawkus? Anyone who can enlighten me on this, feel free to write.

As you can deduce from my comparisons to Def Jam and Rawkus, my first taste of Low Life’s British flavor is a damn good one. Music like this would be “most highly regarded” anywhere between the North and South Pole. Superb beats and outstanding lyricists throughout, there is no doubt that basketball isn’t the only US export where foreigners have closed the gap. For purists, the biggest concern is whether or not non-American hip-hop is still “hip-hop”. Without getting into that impossible debate (how do you define “hip-hop”, really?), rest assured that the integrity of the sound remains. The undisputed instrument of choice, drums, are used profusely and the rhyme structure, content (check the very American smack-talking of Verb T and Harry Love’s “Showbitchness”), and attitude are all comfortably familiar. Some readers might find this obvious, but you’d be surprised how many people think that just because a rap song originates from overseas it’s somehow morphed into something completely unrecognizable.

The only noticeable difference is the British accents. As you would expect, this is a significant change, but not in a negative way. It’s practically refreshing. Just like the newly popular drawl of Dirty South artists, Snoop’s lethargic flow, or Jada’s robotic delivery, accents are nothing new to the game. Again, why do people always assume that a foreign accent is somehow crazier than a Boston or New York accent?

Album highlights include Task Force’s “The Last Tune”, SkinnyMan’s “Who ? Me”, Braintax’s “Just Me”, and my personal favorite, Rodney P’s “Big Tings We Inna”. The entire spectrum from low-key to high energy is covered, so there’s a little something for everyone. A bonus disc is also packed with “Life Before 40”, containing videos and an exclusive DJ mix of more Low Life material by Kam. For those looking to broaden their horizons, go buy this album. I take that back; EVERYONE should buy this album.