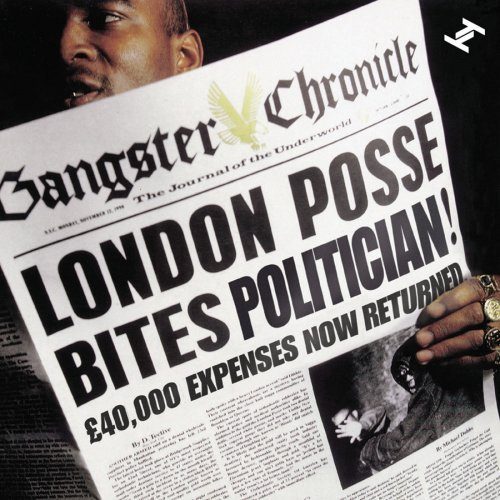 In 1990, I wasn’t even aware that there was such a thing as UK hip-hop, much less that London Posse existed. I’m not the only American who slept on them. Their 1990 album “Gangster Chronicle,” released on Mango, a defunct subsidiary of Island Records, didn’t make much of a splash on this side of the Atlantic. Tru Thought’s re-release of the album, which includes a second disc of remixes and singles, is an opportunity to correct a glaring omission in my knowledge of British rap history.

Matt Jost already did right by London Posse in his review of their greatest hits a few years ago. I won’t rehash too much of his review, but the basics are that London Posse were formed in the mid-eighties as a quartet with Sypho, Rodney P, Bionic and DJ Biznizz.  The mid-eighties were still early days for hip-hop, and really early days for international hip-hop. In the U.S., people outside of New York had figured out how to reinterpret hip-hop for their regions. Kids outside of the states were still struggling with how to adapt this exciting new music, which was so rooted in African-American culture, to where they were from. Bionic and Rodney P knew that the aggression, swagger, and swing of hip-hop could work in the U.K, but they wanted to add a British flair to the stripped-down beats and rappity-rap that was big in the U.S. at the time. Bionic had experience as a reggae DJ, which influenced his rap style. The group toured the U.S. in 1986 with Big Audio Dynamite, and the experience had a huge impact on their sound. They realized that trying to sound American was a losing proposition. They also worked with  Boogie Down Production, appearing in the video for “The Bridge Is Over.” That song might have given them an idea of how to proceed; “The Bridge Is Over” added a melody to the standard boom-bap, and KRS-One gave his rhymes a Jamaican inflection. The result was ragga mixed with hip-hop, which must have made perfect sense to hip-hop lovers whose parents came from the West Indies and who were steeped in dancehall and ragga. However they decided upon their sound, the end result was a combination of hard hip-hop and ragga, with a little bit of dance music thrown in for good measure.

Opening track “Money Mad” combines trunk-rattling 808s and a siren whine that could have come from an NWA album with a reggae lilt. Rodney P and Bionic sound tough, but London tough rather than New York tough. The song is a perfect translation of late-80s New York boom-bap to a U.K. context. Bionic’s voice is Jamaica by way of the rough parts of London. Rodney P raps in the cadence of New York rappers, but with a thick British accent full of swagger. There is nothing inauthentic or ersatz about their rapping, and nothing to imply that hip-hop was an art form that the UK had adopted rather than created.

Many of the beats follow the template of drum machines over soul loops that was popular in the U.S. at the time. On “Jump Around” Rodney P and Bionic rap over a swinging soul sample that could have been produced by Eric B or Ced Gee rather than British producer Twilight Firm. The duo rap as hard as Kool Keith or Rakim, but they don’t try to sound like them. In fact, they call out other UK rappers who imitate their American counterparts: “You fucking wanker/Why you trying to sound like a Yankee?” “Gangster Chronicles” and “How’s Life In London” have the sinister feel of West Coast gangster rap. Sparkii, who produced most of the album, gives a few hints to his British heritage, but most of  the beats on “Gangster Chronicles” wouldn’t have been out of place on a U.S. rap album.

As good as it is, the album suffers from some of the same issues that plague most rap albums from the time period. For one thing, while Rodney P and Bionic are both good rappers, their style is dated by today’s standards. Most of today’s rappers are much smoother on the beat than Rodney and Bionic. Or Ice T, or Chuck D, or any rapper from the late eighties, for that matter. The art form has progressed almost as much as the technology has. Which isn’t to say that old school rappers were worse than today’s rappers, but they were operating before MCs figured out other ways of approaching a beat besides head-on. There is a clumsiness to the flow that is similar to the clunkiness of the drum machines. It’s a roughness that has gotten smoothed over the the last twenty years.

There are also a few obvious attempts at crossover hits that didn’t work for me. “Like The Other Half Do” has great lyrics about the divide between rich and poor, but the sing-songy chorus and chipper reggae beat don’t jibe with the mood of the rest of the album. “Tell Me Something’s” attempt at serious R&B also feels out of place and dated. And finally, the B-Side “Shut the Fuck Up Bitch You Can’t Sing” is just the most egregious example of the regrettable youthful misogyny that shows up from time to time on “Gangster Chronicles.”

“Shut the Fuck Up Bitch You Can’t Sing” is also one of the few songs on Disc 2 that could have been left on the cutting room floor. Most of the the bonus material is made up of remixes, B-Sides, singles, and tracks intended for a second album that never materialized. The remixes are a nice but non-essential addition, but the post-“Gangster Chronicles” songs are mostly excellent. They show the band continuing in the same vein but also progressing. “Diamonds Are Forever” has a dark, subdued feel, while “London Massive” has a bouncing beat and double-time rapping by Bionic. It’s a shame the group fell apart before recording more albums, because they were definitely going in an interesting direction.

“Gangster Chronicles” has been called the best UK hip-hop album ever. I haven’t listened to enough British hip-hop to know if that’s true, but the album can rightfully be considered a classic. The only reason why I’m not rating it a nine or a ten is that it does sound a bit dated and rough in spots. Of course, I’m coming to this album 23 years late, with no sense of history or context, so those who grew up with this album are free to disagree with me.  London Posse hit as hard as early Ultramagnetic MCs, but do it in a way that sounds distinctly and authentically British. If you are at all a fan of golden age hip-hop from whatever continent, you need to pick this up.