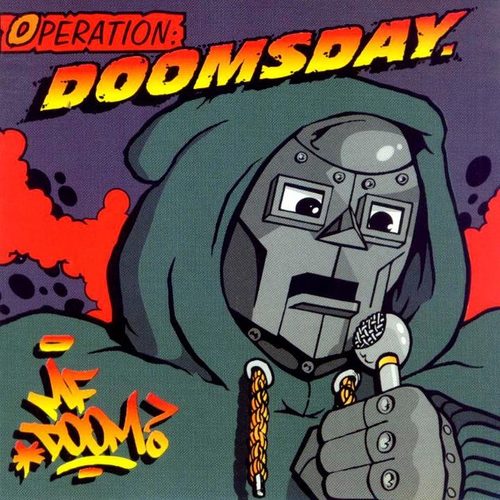 If you’re a fan of what is collectively (and sometimes derisively) called “backpacker rap,” you’re probably familiar with Metal Face DOOM a/k/a Zev Love X; his alias as the former frontman of troubled rap group K.M.D. After their sophomore album “Black Bastards” was unceremoniously pulled from stores and group member Subroc was killed in a head-on car collision, Zev disappeared from the spotlight only to return as MF DOOM – an underground rapper whose lyrical rap identity was hidden behind a metal mask. Without this lead paragraph you might have a hard time even linking the two together. Zev was more up-tempo and politically oriented while MF DOOM is a much more ominous sounding and slower flowing rap artist. For all practical purposes they ARE two different people. The weight of the world has changed him into a different man.

The new persona allows him to explore radical new fronts untapped by more contemporary artists in the genre; as a supervillain bent on world destruction – or maybe it’s actually world reconstruction? You’ll have to decide for yourself, but unlike most albums you won’t be bored by the interlude/skits throughout – they continue the comic book story started on “The Time We Faced DOOM” all the way through to the track “Hero vs. Villain” where a spoken word monologue by E. Mason makes you consider the story’s implications.

Between the interludes is an album chock full of slamming cuts produced by DOOM himself. It’s hard to pin down where Metal Face is coming from lyrically on the album – which is precisely what keeps it interesting. Sometimes DOOM just seems to be flowing whatever went together in an almost reckless disregard for the beat, other times you get the feeling he’s dropping serious science. Throughout the music takes chances underneath the flow – such as the almost elevator muzakesque “Rhymes Like Dimes” or the hilariously bugged samples of Scooby Doo on “HEY!” The weirdest track of all may be “Tick, Tick…” featuring his partner MF Grimm. At first the track seems to speed up and slow down at random ALONG with the rap flow – but as you sink deeper into the groove the timing of the changes becomes apparent and the result is an experimental dopeness not seen since Lateef and Lyrics Born dropped “Latyrx.” Grimm (who is unfortunately locked down on a bid right now) spills jewels all over the cut.

Looks like L.L. Cool J is gonna have to give up the title. It’s hard to find any tracks on this album that a fan of musically creative and lyrically unpredictable hip-hop would not like. “With no hands, I chopped these drums off ‘Truly Yours’, G Rap” confesses DOOM on “Go With the Flow” and sure enough, you can hear G Rap on the intro and throughout. Besides honesty props on the sample use, the track itself is just ill. “Red and Gold” with Ghidra is even more bugged out – musically it’s straight from the AM softer side but lyrically it’s a beatdown in the “Don’t fuck with my crew” category. “Operation Greenbacks” with Megalon is a well-known theme in hip-hop (getting that money) but count on MF DOOM to completely move past it and flip up his narrative:

“Looked into my baby face, my boo was like, ‘Well
I know your types of clientele, thoughts need’
As I held her firmly yet gentle as a soft seed
She said, ‘The one with the horse weave, the pretty one
or crazy-hot to touch the tattoo, through the short sleeve,
which one you want?’ I’m like if there was comp
fuck around a nigga like me, probably run up in all three”

You never know what to expect from MF DOOM, other than a full-length album of head-nodding and unique hip-hop. You won’t even be mad that he brought in Pebbles for some additional sung vocals on “Doomsday” and “The Mic,” it adds the right amount of flavor to the mix. DOOM is “Dead Bent” to the point of sounding high or drunk when he raps, but somehow every way it’s wrong makes it right; more so than even Ol’ Dirty Bastard is capable of. To sleep on this album would be a mistake, because MF DOOM has come back from tragedy with a triumphantly dope LP.