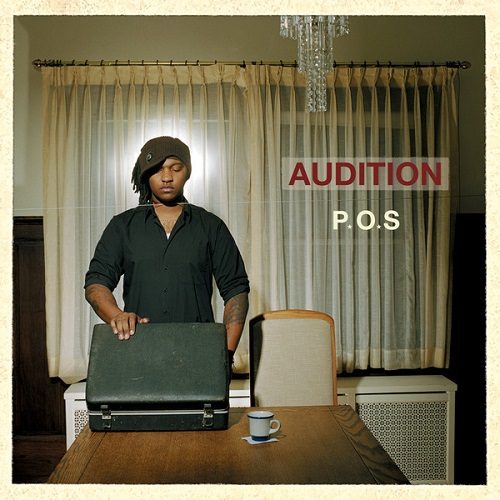 What happens when punk-rock and hip-hop meet? They introduce themselves, chat a little bit, and have a baby named P.O.S. The Rhymesayers protÃ©gÃ© is back with his sophomore effort “Audition.” He calls it his first real step as an artist, let’s hope they’re not baby steps.

The first song, “Half Cocked Concepts” is a fairly good representation of the album’s vibe, even if it is the heaviest track on the CD. P.O.S. starts rapping over a simple break beat with a guitar riff as the backbone. The chorus features screaming vocals (Korn or Pantera style). At first the combination of these styles can be pretty shocking, but with an open mind, it can produce some adrenaline. Unfortunately, after the chorus this musical mixture becomes a problem. Electric guitars jump over the beat and battle each other for the center of attention, leaving our featured MC with nothing but his average mic presence to try and make himself heard. Needless to say, it doesn’t work.

If he was trying to create a hyped-up anthem, he’s much more successful with “Stand Up (Let’s Get Murdered).” It’s more hip-hop, with a soulful, spazmatic beat and real lyrics:

He shows versatility on the slowed down “De La Souls” featuring Greg Attonito, from ska/punk band Bouncing Souls. The punk influence on this song is much more effective than on “..Concepts.” The simple, declining bassline is complemented with uplifting strings. Attonito sings a liberating hook, claiming “No one will ever be like me” and P.O.S. creates a nice picture of his life.

“Product of an East German black
who kissed the neck of a pretty woman named Grace
…
As we go a little something like this
Look mom, no protection
Now I gotta a little boy by the name of Jake”

Highlights like these hold the album up but there’s still somewhat of an identity problem. It’s unlikely that someone is going to appreciate a heavy metal inspired song like “Yeah Right (Science, Science)” if they bought this album for the laid back hip-hop heard on “Bleeding Hearts Club” featuring Slug. Neither song is bad in itself, but when they’re on the same album, it really creates an inconsistent vibe and hurts the possibility for an encompassing theme or a vibe. It’s usually a good thing to say “No song sounds the same on this album,” but this might be an exception. The production needs to find a better way to infuse the influences of hip-hop and rock into the same songs instead of making some heavy rock songs and some rap songs and putting them on the same album.

P.O.S. has a little work to do as an MC. There are times when his flow is somewhat off-beat, although this isn’t often. There are also a few songs where he tries too hard to contort his delivery to fit the vibe of the song. This is most notable when he goes Vinnie Paz on “Paul Kersey to Jack Kimball.” When he’s on-point, he’s a down to earth, humble MC (the type you expect from Rhymesayers) with a smooth, liquid flow. Overall, there are good songs on this album but the musical experimentation goes wrong every now and then. If you’re a fan of both heavy punk-rock and hip-hop then you’ll probably love this album, but if you’re looking for one or the other, then you’ll probably just really like half of this album.