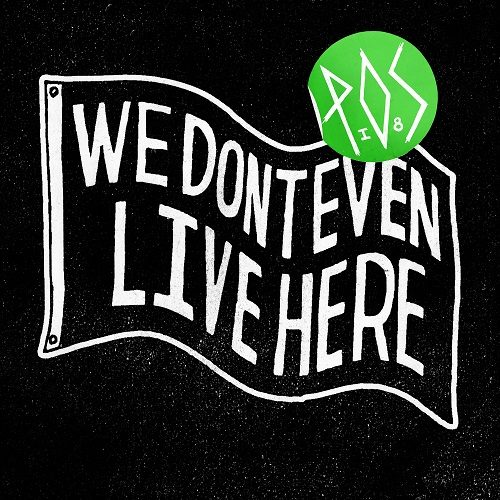 For Rhymesayers Ent. releases, good things come in threes. Chasing the heels of Aesop Rock’s “Skelethon” and Brother Ali’s “Mourning in America and Dreaming in Color,” P.O.S drops his first album since his 2009 breakthrough “Never Better.” The Twin Cities rapper, best known for combining elements of hip hop and heavy metal, continues to push hip hop’s boundaries, this time using heavy electronic sounds. The harsh synth-driven record, “We Don’t Even Live Here” is as heavy as his previous releases, but P.O.S’s lyrical content tends to be more easy-going than on previous releases.

By no means “We Don’t Even Live Here” a soft record, but P.O.S sounds like he’s having more fun on his first album in three years, than he has on previous records. “Fuck Your Stuff” is an anthem for being reckless and Hulk-smashing anything in sight. I highly suggest playing this while running a 5K or bench pressing. “Get Down,” which features a guest verse from Mike Mictlan, features some crazy synth work, and is the closest a rapper named Pissed Off Stef is ever going to get to light-hearted, while still dropping bars like:

“We too dirty man
Shimmy shimmy ya
Skinny bars, naw
All cents no penny jar
Snub a star, celebrity fed
No meals worth mentioning, all unsettling
Nihilist, anarchist, mind set reddening
Need what? fuck meds
All dead everything
These cats on that
All hail petty things
Ready with the cheat
I’mma beat em in they sleep”

“We Don’t Even Live Here” is solid front-to-back and is arguably a more consistent record than “Never Better.” The new record also doesn’t seem to have as many goosebump-inducing moments like “Purexed,” “Optimist (We Are Not For Them),” or “The Brave and The Snake,” from his 2009 record. “We Don’t Even Live Here’s” best record is “Where We Land,” which features Justin Vernon (best known from Bon Iver and his many features on Kanye’s last solo effort). This is a match made in Heaven, as Vernon’s closing bridge along with P.O.S’s memorable hook makes the track one of the year’s best album cuts.

Other highlights include “Wanted/Wasted,” which features piano stabs, and is one of the more traditional tracks on the album. “Lock-Picks, Knives, Bricks and Bats” features one of the album’s best production, with a brilliantly subtle, spacey vocal sample. “Fire in the Hole/Arrow to the Action” will appease metal fans with hard drums and shredding guitars.

One of the more curious moments on the record, comes in the form of its title track. The cut is extremely uptempo and is almost a dance record, except with rock drums over the verses, and still manages to not be a train wreck. The closer, “Piano Hits” follows a similar mesh of EDM and heavy metal, and again is executed flawlessly.

Following a record like “Never Better” is never easy for an artist. Usually an artist can try and re-create the album that gave him so much acclaim, or he can scrap everything and create something new and fresh, with the risk of alienating his fan base. P.O.S chose to do the latter with “We Don’t Even Live Here,” but unlike many artists, he pulled it off without a hitch.