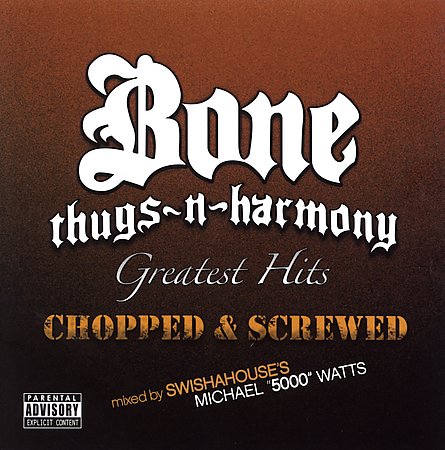 Occasionally I venture to Amazon to get info, such as release dates, on albums I review. I usually take the time to check out what Amazon users have to say about the CD. While I expect to get a laugh from the mix of anti-rap rants and self-proclaimed expert approvals, every now and then something is actually worth noting. In the case of the latest release featuring Bone, one complaint almost made sense. Aside from a few gripes that this wasn’t “approved” by Bone (since Ruthless Records and Tomica Wright own exclusive rights to most of their quality work), fans of Bone had doubts that the screwed and chopped treatment would do Bone’s fast flow justice. Indeed, if the tongue-twisting antics of the five rappers from Cleveland were the only reason you listened to Bone, then a screwed and chopped version of all their hits would strip their music of all attractive qualities. But chances are that it takes a little more than high speed wordplay to entice the average rap fan. If pure speed alone were enough to garner platinum status, Twista would have been raking in the dough with the bargain bin album, “Runnin’ Off At Da Mouth.” Instead, Bone’s attractiveness extends past the mere ability to rap fast and finds its home in the group’s harmonious sound and equally smooth production. When approached from that angle, Bone’s music actually lends itself very well to the screwed and chopped treatment. After all, both Texas rap and the West Coast funk that DJ Screw loved to include on his mixtapes found their roots in the funk and soul music of the seventies. If any rap act were to come close to recreating that sound, it would have to be Bone.

As with anything, a good idea only materializes if it is executed properly. In this case, Ruthless Records went to the best living screwed and chopped DJ for this collection, enlisting Michael “5000” Watts of Swishahouse fame. Watts shows why his Swishahouse Records went on to dominate Texas and beyond in 2005 with his impeccable skills behind the turntables. There should be no complaints to the quality of the DJing on this collection. With 2 CDs consisting on 24 tracks, song selection also leaves little to complain about. I’ll admit I stopped peeping Bone albums after “The Art of War,” but if my recollection of radio and video play since then is on point then this collection missed little. Personal favorites include the short intro consisting of “Carole of the Bones” as well as all the Bone classics such as “Days of Our Livez,” “Tha Crossroads,” “Look Into My Eyez,” and “1st of Tha Month.” But the collection doesn’t stop at Bone albums, as it also includes various tracks from Bone side projects and even other people’s albums. Biggie fans will be pleased to find the street anthem “Notorious Thugs” included along with Pac’s “Thug Luv.” Those who were fans of anything and everything Mo Thug will find tracks like “Ghetto Cowboy” and “All Good” from the Mo Thug compilations to their liking. Even later Bone hits make their way on here as “Change The World” and the Phil Collins assisted “Home” round out the two disc set. The only complaint this reviewer had was the inclusion of Mariah Carey’s “Breakdown” as I’m not a fan of slowing down female vocals.

Throughout my years as a rap fan I have met countless people who get rubbed the wrong way by screwed and chopped music, but I have yet to meet anyone who can’t stand Bone. If my experience accurately reflects the taste of rap fans, then chances are fans of screwed and chopped music will need little persuasion to go cop this CD. But fans of Bone may likely fall into the group that loves Bone but can’t stand their music screwed up. If you find yourself in this group, I urge you to give screwed and chopped music one last chance and go out and buy this CD. The main reason to cop this is the fact that Bone is the perfect match for screwed up music and this CD is shows exactly what the screwed and chopped sound is capable of. If you need more reasons, chances are this double CD is reasonably priced, as was the regular version of Bone’s “Greatest Hits.” If that isn’t enough, then consider this release as your chance to decipher all of Bone’s lyrics without constantly rewinding the track. Those Bone fans who remember the times before OHHLA also remember the fun of trying to figure out just what Bone was saying. So even if you end up hating the CD, the fact that it’s screwed will give you your own personal archive of Bone lyrics that you can pull out and play next time you and your boys get into an argument over what Bizzy, Layzie, Flesh, Wish, or Krayzie really said.