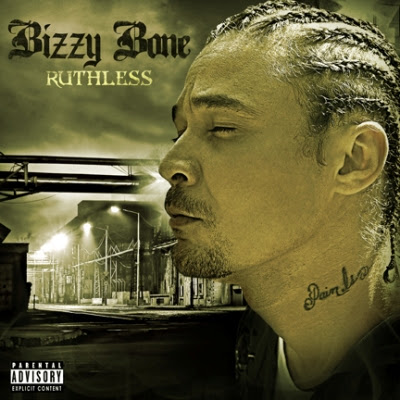 Bryon Anthony McCane II is busier than ever these days. Less than half a year after the release of “Trials & Tribulations” Bizzy Bone is back again with “Ruthless.” What’s confusing even for his most dedicated fans is that plans are ALREADY in place for his next album “A Song For You” in April – that’s right – ONE MONTH FROM NOW. The title track featuring DMX has already been released as a single with accompanying music video. If there’s any irony to be found it’s that McCane may usurp DMX for the rapper with the most albums released in a 12 month span.

Will any songs on “Ruthless” receive a single release and music video treatment? Probably not. While Koch Records is the distributor for this unpromoted Bizzy Bone album,Siccness Network is the imprint releasing it. Bizzy seems to bounce from one to the next from CD to CD, last coming out on Koch and Real Talk Entertainment, while next month’s new album is on Virgin Records. Such turbulence may be fitting for Bizzy Bone, a rapper almost as well known for his stints in Bone Thugs-N-Harmony as his time OUTSIDEtheir fold. Dischord in his personal relationships, confusing record label deals, and a constant lyrical battle between good and evil make for a fascinating if damn near schizophrenic listening experience. No two songs on “Ruthless” better illustrate this dichotomy than “Hoodtails” and “Fuck Da World.” The former offers hope and salvation:

“Hoodtails, strictly for my niggaz doin fed time
Dead time, lookin fo’ revelations, look in yo’ mind
Hoodtails, wood tail, shake yo’ stick
When you up in here misunderstood the holy grail man have no fear
This is the order of the mailman, Christ you’ll never fail me
Logically, better watch what you blow and what you don’t understand
Sands of the hourglass, cameras when we shower fast
I’m clean as a whistle like bald head, and I smoke the class”

The latter sees nothing but darkness, hopelessness and negativity:

“I know they wish for me to perish
Cause I dropped out of high school chasin the jewels with no credits
Flippin burgers, I just can’t see it
A face smoke green with a triple beam in one night no secrets
Fuck them feds, it ain’t no love at all for ’em
They pull me over with police dogs, look in my {*WOOF WOOF WOOF WOOF*}
That’s motive enough for murder!
I stand in the cut with tec 9’s, burners ready to serve ’em
I’m in the rain, with the nine on my brain, blaow to police
and fuck the world! Fuck the whole wide world, America and all!
[…]
Don’t nobody love me, and I don’t love nobody
It’s only a few people that I roll with that I consider for the posse”

If Bizzy Bone wasn’t unbalanced, would he be this fascinating? Probably not. There’s little to no explanation for his erratic mood (musically and otherwise), his prolific releases, and his choices for career advancement. That doesn’t stop “Ruthless” from being a surprisingly worthwhile album. The Dave Moss produced “Gangsta” swings along with an energetic synthetic beat and classically high-speed Bone Thugs rap. “That’s How” features a guest appearance by Miami native Pitbull and stomps along with pure bass, rapidfire drums and adrenaline – or as Pitbull puts it “I’m so hot, I’ll snort coke (and) spit crack.” It wouldn’t feel like a Bizzy Bone album without at least one ode to marijuana, and the Cricet produced “Get High” fits the bill. He also finds the time to smooth it out though and do a little something “4 Da Ladies.” While none of the production is overwhelmingly amazing it’s fair to say none of it is unlistenable either. “Ruthless” stays solid from start to finish.

The end result is this album only leaves listeners with more questions and few answers. It’s possible “A Song For You” may resolve some of these issues next month, but it’s equally plausible to assume that Bizzy Bone remains artistically fascinating simply by being as troubled as he is talented, as much an open book as an inscrutable tome depending on the day and time. “Ruthless” won’t get the same promotion as next month’s Virgin Records release, but don’t let that fool you into believing that this album isn’t a worthwhile investment too.