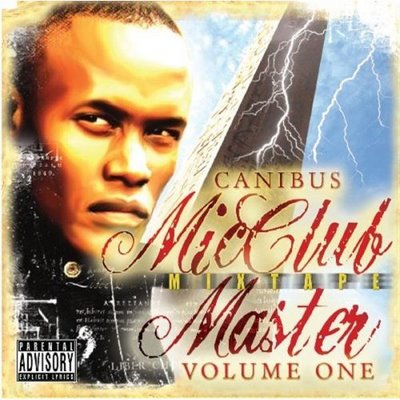 Released the same week as the much better distributed “Hip-Hop for $ale” on Babygrande Records, it’s possible even the most loyal of Canibus fans completely overlooked the Switchblade Music release of “MicClub Mixtape Master, Vol. 1.” In fact it’s not completely clear who the hell Switchblade Music is. It could be an imprint Canibus created just for this release, it could be a really small indie label with no previous reputation, or it could be a name ‘Bis slapped on this CD that’s absolutely meaningless. There’s no website for it regardless and unless you checked the Canibus fansites or saw it on the list of CD’s for sale at a site like Sandbox, there’s no way you’d know about this release.

What seems obvious after listening to this album though is that Canibus or someone who is very familiar with his catalogue compiled a “best of” selection of his freestyles from radio and mixtapes. Some are obviously referenced by the shoutouts he gives to their producer (Kay Slay is namechecked quite a bit) and others are just a mystery. Either way an album of Canibus freestyles is a fantastic idea, since ‘Bis is often an MC who is best served when he just rips over a beat with no particular topic. If the track is hot, ‘Bis comes hotter. Take “Say it Ain’t So” for example:

“Jesus Christ, my name should be Jeebus Mic
Even when I rip the shit, fans leave uptight
Can-I-Bus, spit is in my blood, I’m blessed
Outside the bones but inside the flesh
And yes, if I was focused I could crush you
Cause you sayin you focused, now how come I can still touch you?
I bust you, then spit some Young Buck shit at you
Cause I still got the heart to go bust me a head or two
The perfect music machine, mechanical being
The most lyrical digital streams the world has ever seen
I did, I do, I does, I am
I will be, I was the same nigga you love
But slugs rain from the sky, it’s like the angels want me to die
They push me harder cause they want me to try
A pitbull off the leash, barkin speech
Like a bull in the pit, liftin you off your feet
I feel like the world’s mine, I can park in the street
Kick the world’s illest rhyme, police officers weep
People layin on the concrete exhausted from heat
Watchin John Kerry spit over some Michael Moore beats
This is a little somethin that my repertoire boast
I almost was in control of all coasts”

What’s surprising is that even as previously uncompiled freestyles, many of these tracks are long enough and slick enough sounding to qualify as full length Canibus songs. The only thing that DQ’s many of them from that consideration is the obviously familiar beats that get recycled, but it’s hard to argue that ‘Bis doesn’t make them his own. I’d rather hear Canibus than Fabolous on “Collecting Taxes,” as (no pun intended) he BREATHES new life into this already banging set of pianoes and samples:

“I lean you back like your spine just cracked
Rhyme chiropractor get paid to adjust raps
Spit somethin, let me see if I’ma bust back
I front back gore yo’ ass ’til you collapse
Spin hats around lightspeed well hubcaps
My gun’ll clap faster than Savion Glover taps
Wave the four at you, if it take more than that
I kick down your door before you get the double axe
Strapped for Canibus, just relax
I came to collect taxes, as simple as that
I raid your refridgerator, but other than that
Before I leave I remind you to remember you’re whack
Yo my girl loves Usher but she said he gettin cocky
I told her SHUT UP, cause that’s the same way she knock me
In the name of hip-hop I rock beats on blocked streets
There ain’t an MC that can stop me
Need more beats? Scott Storch ain’t cheap
In Virginia, DMP or Nottz got heat”

It’s not all Canibus solo on this just over 70 minute, 26 track long release, which only increases the perception it’s a regular album and not just a freestyle collection. ‘Bis swaps verses with original Outsidaz member Young Zee on “Baggin’ Up Da Poundz,” forms the “Allied Metaforces” with lyrical legend Kool G. Rap on a five minute epic, and reunites a rap clique that should have taken over the world on “Horsemen Talk” featuring Killah Priest, Kurupt and Ras Kass. The majority of the songs are just ‘Bis flipping to the dope beats by his lonesome, which works out just fine since Canibus keeps it fresh with a variety of different beats and different styles. On “Da Paycut” he’s a relaxed rapper, being both witty and humorously dismissive:

“Aiyyo we got off to a cold start, let me warm shit up
You now listening to Can-I-Bus
Yo why would you do that? Your view too black
You must have smoked somethin I used to call pool hall crack
Put a suit on you still look whack
Somewhere givin orders from confined quarters, handcuffed to a fag
Played the street too much, shoulda been in the lab
Now you sad, mad at who you was fussin with last
Life’s a bitch ain’t it? Smile, it ain’t nothin to laugh
Rose hell at show’n’tell, brought a gun to your class
Keep the herb on the dash cause I’m servin ’em fast
Classic lyrics for that ass, cause the purpose is cash”

“Canibus hates the media and the magazines
They add so much credibility to elaborate schemes
Internet chatrooms with live feeds of a rapper
Bein eaten alive by live bees
Sound barriers like the Lockheed, even with knock knees
I run across rough terrain at mach speed
That’s a rhyme from like 9-3, it’s vivid in the mind
as pictures with six hundred DPI’s to a sheet
If I’m high when I speak, the knowledge is deep, solid as concrete
This is real hip-hop for the streets”

I’d rather not score this album on beats, because in all fairness I can’t prove which if any out of the ones found here are 100% original. It’s irrelevant anyway because this album is meant to show off Canibus at his verbal flipping best, showing that he doesn’t just talk about being a great MC at the drop of a dime, he goes out to prove it on a regular basis. In the end “MicClub Mixtape Master, Vol. 1” turns out better than some of the polished and professional CD’s in his catalogue. There’s no forced themes or topics, no restrictions on what kind of music he can flow to, and no reason for ‘Bis not to drop his hottest lines. Unless you want to go out and buy the 26 different sources this album was compiled from I’d call this very good value for your money to hip-hop and Canibus appreciators alike.