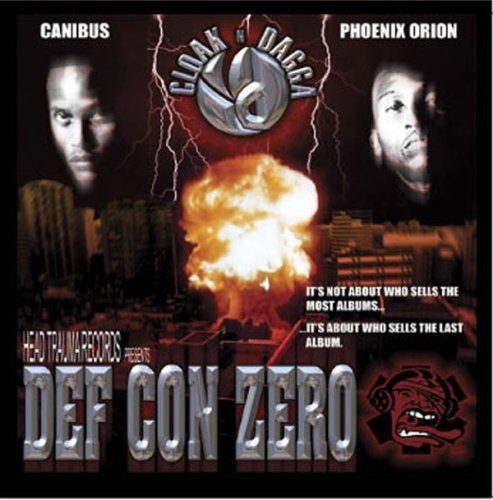 Before we go any further, I’d like to thank Canibus-Central.com. They’re not billed or listed on the jacket of this CD in any way, but without their informative website I would never have been able to find out who Phoenix Orion was. Turns out that Orion is a member of the Alien Nation clique (which includes Supernatural) and that he released an acclaimed album named “Zimulated Experiencez” back in 1999 – acclaimed enough to be mentioned in the URB Next 100 for that year. He’s had several more underground releases since and when pressed to explain his futuristic rap style always says it’s from 3080 – beyond both Kool Keith’s year 3000 and Del the Funky Homosapien’s (Deltron) 3030. Canibus of course needs no explanation – he was branded the future of rap and the second coming of Rakim from the very first time his freestyle was heard. If fans had been a little more realistic when he debuted he’d be sharing airtime with Eminem and Fabolous now, but the bar was set so high any first album would have been a commercial flop. To his credit ‘Bis took their dismissal as fuel for his fire and has been releasing interesting and often outstanding projects through the underground ever since, not unlike his partner Phoenix. Therefore on paper at least “Def Con Zero” sounds like a truly explosive match made in heaven.

Clocking in at just under 78 minutes with 19 tracks total, ‘Bis and the MC dubbed PXO for short are giving maximum value for this release, especially when you consider that there’s a bonus DVD packaged inside with extra behind the scenes features. All of that doesn’t mean shit though if the beats and rhymes aren’t hot, so I pondered whether or not ‘Bis and his partner would rip shit while waiting through a post-apocalyptic “Black Kobra” intro. On the NIR produced title track I finally got the answer. Orion is the first to grab the mic and rip a verse:

“Kevlar suits, M-16’s with the laser beams
God squad supreme, hip-hop SWAT team
Spittin like the force of a bomb, so ring the alarm
We stay armed, cloak’n’dagga this is Def Con
Soundwave transform
Canibus change to the ghetto Megatron arm
Kill these hip-hop robots, we spit hot words to serve nerds
Smoke you like I do my herb, that’s my word”

It would be hard for PXO to live up to the kind of hype he’s received, so much like Canibus back in 1998 this may fall short of people’s expectations. That’s not to say Orion is a whack MC. If you had to cross merge DNA strands a la Jeff Goldbum in “The Fly,” you could use Jay-Z and Esoteric to get the blend of intellect, charisma and breath control that would probably be closest to PXO; and it’s probably no coincidence that Orion actually raps that he’s from Marcy on the album. On the other hand rapping about Transformers is a little cliche these days but Orion deserves another chance since it’s only the first track. ‘Bis does a nice job on clean up:

Things pick up steam with “Majestic Mic Masters,” a more minimalistic B.H. (Bitch Hater) track with heavy emphasis on bass and expansive room for the tandem to spit shit that’s “lyrically lethal” and compare themselves to Ong Bak. “Close to Me” is a little harder to get a grip on. I know ‘Bis was down with Free back when they did “Patriots” in 1998, but they’ve shown suspiciously little love for each other during her tenure at 106 & Park. The word on the grapevine is she wants to resurrect her rap career since leaving the show last July, so perhaps she views getting back together with the Canibus man as the place to start:

“Don’t speak on your feet, spank a nigga over the beat
You talkin to Free? Lower your speech
Marie, F-R-double-E MC
Pre-emptive strike on the mic is a E-M-P
Queen on the cover of King, a matriarch
Some of them think H.B.I.C. among other things
I do this for the underground and everything above
So when I’m underground they be showin me love”

She hopes they’ll show her love, at any rate. She’s dropped the cheerful TV show host persona for a rap style that’s much more thugged out and Remy Ma in its presentation. She’s not the first or last of the surprise guests on this album. K-Solo drops in on “Letter From Head Trauma,” which borrows verbally and musically from Public Enemy’s “Black Steel in the Hour of Chaos,” but quite frankly he sounds about as smooth as giving the mic to a wino with throat cancer. Thankfully ‘Bis, Orion and their other guest star Kool G. Rap bail out his horrid performance. It’s worth noting though that G. Rap seems to be audibly drawing breath during his delivery much like Big Pun did before he died, so while he’s still one of the most underrated greats vocally and lyrically I’m a little concerned about his health. I’m also surprised they didn’t try to cover that up a little better in the mix. Further guest spots include Crystal Celeste Grant on “Gold Trigga,” Chalie MackManSupreme on “Livin’,” Power Move & Halo Infinity on “Universal Soldiers” and (sadly) Solo again on “Sit Yo Ho Ass Down” among others.

Does “Def Con Zero” equal the hip-hop bombshell pairing two well regarded underground MC’s should be? Unfortunately for this team it’s not quite at the level of The Perceptionists or Murs & Slug as a hip-hop super team. That’s not to say there aren’t some hot tracks. The slick “Don’t Hurt Nobody” combines an up-tempo track with some casually flowed raps that sound all the more wicked due to their paced delivery. The futuristic “Never Run” layers up the beats and has an ominous howl in the background that makes ‘Bis and PXO sound like they’re rhyming in a ghost town obliterated by World War III. The simple but plucky Markeyz beat on “Y’all Can’t Ball” is also recommended, where Orion declares himself “MVP – Most Verbally Passionate MC.” The heavy rock sound of “Rhythmatic Jiu Jitsu” that Simon Sez provides is a definite headnodder, and one almost gets the impression Canibus took a potshot at G-Unit at the start of this solo track. On the whole though the album is uneven, as the change in producers from one song to the next seems more erratic than on most hip-hop records, especially given ‘Bis and PXO needed to solidly define their futuristic vibe in a collaborative effort. Their personalities never really combine effectively, and in the end they sound more like they’re just rapping on the same track because the studio was double booked than they do actually rapping with each other. I’m sure Canibus is a fan of Orion’s work and vice versa but you’d be hard-pressed to say they gel well. “Def Con Zero” is recommended for hardcore marks for either artist, but not to the casual fans of both.