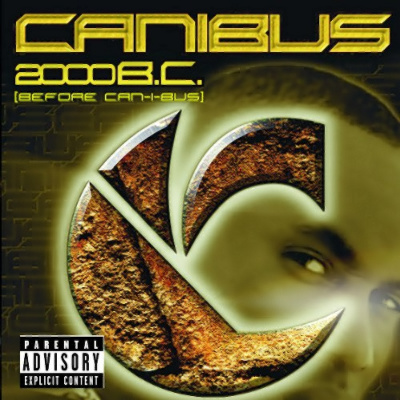 There aren’t many rappers who can justify having their lead paragraph be a quote; but Canibus is that nice. The nicest of all times? Nah, probably not – but he’s one of the few cats out who can say “AIDS is afraid to catch me” on the mic and actually make it sound believable.

Half the new rappers out don’t release debut albums a third as good as “Can-I-Bus”, but people expected more from “THE NEXT RAKIM” and doomed his album without even giving it a fair shake. Interestingly, Canibus doesn’t blame the rap media or the fans – he quite clearly says “motherfuckin WYCLEF spoiled it” on the title track, “2000 B.C.” ‘Clef is not completely at fault; although he did try to promote Canibus as a pop rap star instead of a lyrical terrorist which undoubtedly backfired. Suffice it to say Canibus left Jean and the rest of his Refugee Family back in Haiti and moved on.

The beats are bass-laden and the lyrics are anti-pop; and Bis’ knows this. Without the shock tactics Canibus can still say that “my niggaz got a degree in Thuggonometry” on cuts like the Chaos produced “Watch Who U Beef Wit”; then “regulate without warning” on the lead single “Mic-Nificent”. Canibus steals a page from Eminem’s book of humor (or perhaps Eminem stole his) when he breaks down backward-ass idiots:

For anybody who thought the last album was too commercial, this album will fit like rugged-wear denim. Ty Fyffe produced bangers like “Die Slow”, Irv Gotti laced tracks like “Lost @ ‘C'” and Chaos on “Horsementality” (featuring Kurupt, Ras Kass and Killah Priest) are nothing but the underground raw. This album is so god damned rugged that Pharoahe Monch even shows up for an impromptu acapella 1:20 long “Horsemen” freestyle. Who needs a fucking beat anyway?

Perfection is a high mountain to climb, so it should be no surprise that Canibus is a few steps short of the peak. At times an overabundance of Canibus rhymes about how fucking dope he is leave one yearning for the topic oriented songs of his debut, for better or worse. Certain tracks do not quite pack the right punch either: “100 Bars” is a bit repetitive, The Beatnuts produced “Life Liquid” doesn’t really sound tailored to the ‘Bis flow (it’s a nice track but should be on their own album), and the biggest surprise is how weak the Clue beat is on his duet with Rakim, “I’ll Buss ‘Em U Punish ‘Em”.

As a whole this sophomore album is easily as good or better than the first, but whether this will satisfy the people who’ve already written off Canibus is still anyone’s guess. For this writer, the skills displayed and the flow spit on the mic prove that the big letter ‘C’ is still relevant to hip-hop in the year 2000.