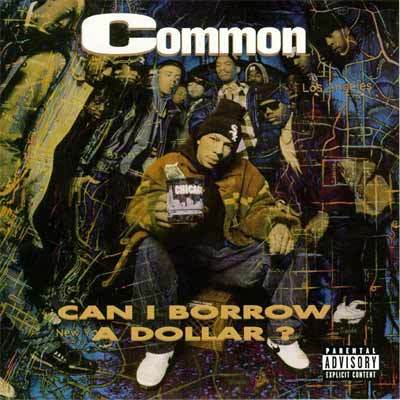 Common Sense :: Can I Borrow a Dollar?

It is a remarkable coincidence that in 1992 two rappers out of Chicago made their national debut who are still around today, well over a decade later. Back then, both rappers carried slightly different (and arguably more telling) monikers: Twista was Tung Twista and Common was Common Sense. The former changed his name voluntarily, the latter had to for legal reasons. Apparently, ‘common sense’ can be turned into a trademark, a fact which all too clearly reveals the lawmaker’s lack thereof. Call it poetic justice that these days Common fares quite well with his abridged alias. Musically, he may not represent the ‘common’ procedure in hip-hop, but thematically, Lonnie Rashid Lynn has a knack for topics the common man and woman can relate to, giving his name an ironic and a true ring at the same time. Still, let’s not forget that he began as Common Sense, a highly symbolic name in its own right. As a rap name, Common Sense may be best fulfilled in “Resurrection,” the classic follow-up to this here debut. Still, a young, aspiring artist picking such a name speaks of a certain frame of mind, if not an entire masterplan to inject rap music with always needed native good judgment.

Or maybe not. Ironically, Common’s debut radiates the cogency of common sense the strongest in its only interlude, when KRS-One’s compelling “No defense against common sense” line is cut up during “No Defense.” Before and after, “Can I Borrow a Dollar?” is not particularly concerned with common sense in the strict definition of the term. The Southside native seems too distracted by rival rappers and the fair sex to do much reasoning beyond calling the aforementioned out. “Can I Borrow a Dollar?” is an eruption of juvenile exuberance, as Com frolics around the beats like a filly on a bright early morning in spring. Chances even are that he adopted the name Common Sense at some point between recording the first tracks and finishing the album, as he repeatedly refers to himself as Peetie Wheatstraw (originally the name of a St. Louis-born blues pioneer). The majority of the tracks also mention a collective named the UnAmerican Caravan, with which Com must have been affiliated in some way: “UAC is family, much tighter than the Waltons.” Other crews that are mentioned are Dem Dare and The Late Show. These and/or UAC may or may not have included the album’s main producers, Immenslope and Twilite Tone. Who Common experts should recognize as the musical masterminds behind “Resurrection,” No ID and Ynot, respectively.

Particularly for more recent Common fans, however, “Can I Borrow a Dollar?” may pack a few surprises. This is where the later posterboy for conscious hip-hop comes the closest to a negative role model, who defines stealing as earning money “the old fashioned way.” Two out of three album artwork pics show him with a forty, and no sooner than on the opener “A Penny For My Thoughts,” he begins to wet his whistle: “My crew’s a strange brew; a drink a day’ll keep the shrink away / We been through AA, but hey, what can I say?” Throughout the album, alcohol is Common’s companion. “I’m in a state where I’ve had too much eightball,” he confesses on “Take it Ez.” “I’m just another one of the nigs, take a swig” he toasts himself on “Just In the Nick of Rhyme.” And the final moments of the album see him relieving himself, reinforcing the impression that, among other things, you just witnessed a drinking binge.

Much more problematic is young Common’s attitude towards women. “Fuck the bitches who dissed us and the hoes who wouldn’t give Rash’ the play,” he defends himself on the closing “Pitchin’ Pennies.” Leading up to that excuse are a number of statements that can only be considered as demeaning to women. Some are even downright misogynistic. The least offensive is the single “Breaker 1/9.” Recounting romantic misadventures, “Breaker 1/9” is funny, but not solely at the expense of others. Not so “Heidi Hoe.” Over an early Beatnuts production, Sense spews:

“What up, bitch! I’m Petey Wheatstraw
and you don’t stop with the Heidi Heidi Hoe
Hi hoe, or bye hoe, if you’re lookin’ for a sucker
(What are you?) I’m just another muthafucka
Pucker your lips, do flips like Mary Lou
Just because I fucked you doesn’t mean that I’ma marry you
Bury you, I will do, after I bill you
Kill you, cause your shit smells like mildew
[…]
Much disrespect goes out to you
and your parents, too, for havin’ you
Haven’t you been introduced to a douche?
I guess you said fuck footloose and got pussyloose
[…]
For recreation givin’ up the body is her hobby
I’m tellin’ Santa Clause you been naughty
Hoe-hoe-hoe, Merry Christmas
Hey yo JuJu, I just had to diss this
Heidi Heidi Hoe”

You can attribute “Heidi Hoe” to the times, but fact is that in terms of strong language and hard feelings it stands out even among choice cuts such as “A Bitch Is a Bitch” and “Bitches Ain’t Shit.” At least on “Tricks Up My Sleeve,” his then-girlfriend Rayshel is given the opportunity to pay him back with a verse of her own. Still, the Common Sense of “Can I Borrow a Dollar?” is a repeat offender, so bitches get dissed on the regular, even on the supposed black solidarity cut “Soul By the Pound.” If released today, a song like “Puppy Chow” would most definitely rub Common fans wrong, not just because of its “Just dog the bitch” chant, but because Common overcame this phase for all of rap with 1997’s “Retrospect For Life,” where he reflected upon the responsiblity of parenthood. Keep that in mind when you follow his reasoning on “Puppy Chow”:

“After a while I’ma wanna get buckwild
and 9 months later I’ma say it ain’t my child
I’m sterile, girl, we ain’t never did nothin’
cause only you and I know that the Common Sense is bluffin’
Little Miss Muffett, that’s how the ball bounces
Sorry you gotta bounce the ball, 8 pounds and 2 ounces”

To tell the truth, it is hard to be mad at “Can I Borrow a Dollar?” Common. That has nothing to do with the amount of time that has passed, or his many meaningful contributions to the artform since. It has everything to do with his youthful expression. He’s like that child that is always forgiven because it’s so damn adorable. And that’s exactly the reason why in a retrospective review such as this one, he shall not so easily be forgiven, why it is indeed necessary to ring the “Charms Alarm.” The good thing is that a song like “Charms Alarm” not only presents a smart aleck, but also someone who really has something to say. Foreshadowing the “I Used to Love H.E.R.” sentiment, Com addresses what was wrong with hip-hop in the early ’90s: “Everybody wanna, wanna rock hard; before you wasn’t hardcore / […] / Elvis Presley junior tryin’ to be somethin’ that you ain’t / No doubt y’all are hoes / you go on stage and take off all your clothes / then you strike a pose / You knows and I knows that’s how you sell your record / Because your shit is butt you gotta get naked.”

Lyrically, wordplay was the order of the day, and playful was Common’s entire approach to rhyming and rapping. 1992 was a boom year for pop culture references in rap, and “Can I Borrow a Dollar?” is one of the prime exhibits. What set Com apart was his enthusiastic, eruptive delivery. Utilizing a hard-to-contain flow that ever so often exclaimed in what can only be described as baby squeaks, Common was part of new generation of MC’s that used rap as their personal playground, experimenting with inflections, impressions, tempos and tongue twisters, (sometimes clumsily) following in the footsteps of innovators such as Kool Moe Dee and Big Daddy Kane. On that note, I seriously question the accuracy of the current Wikipedia entry on “Can I Borrow a Dollar?” which states that the album was ‘originally recorded in 1988, but not released until 1992.’ Not to mention the claim that ‘the album went platinum in three European nations.’ I’ll bet my bottom dollar neither is true. In hip-hop, 1988 and 1992 are worlds apart, and not even Com’s most promoted full-length to date, “Be,” made it anywhere near platinum status in Europe.

A glance at the cover reveals that as a Midwesterner Common Sense was worried about getting heard at all. Surrounded by sketches of NY and LA street maps left and right, holding a mug with Chicago written on it, he virtually begs for a piece of the rap cake. While close to the East Coast in style and sound, No ID and Ynot make it a point to deliver a well rounded package, laying down smooth, thumping tracks that pack an early ’90s punch that would soon be a thing of the past. Just compare “Breaker 1/9” to Chucky & Puffy’s “Big Poppa” (the single that helped bring Biggie to mainstream attention), both relying heavily on their “Between the Sheets” sample, but where “Big Poppa” fully banked on the smooth string section, “Breaker 1/9” adds an extra set of booming drums, inspiring more than just a switch of the hips. “Big Poppa” was hip-hop to sip champagne to (without spilling it), “Breaker 1/9” was hip-hop for the jeep beat collective.

The most surprising production on “Can I Borrow a Dollar?” might be the No ID/Ynot joint effort “Just In the Nick of Rhyme,” which abruptly jumps from a faintly jazzy backdrop to some kick-ass Latin-tinged boom bap. The Beatnuts hit the hardest with “Heidi Hoe,” while the Chi-Town team has a tendency to smoothen even the more rugged tracks (“Blows to the Temple”). “Charms Alarm,” “Take it Ez” and “Soul By the Pound” all anticipate the soulful simplicity of the second album, although the latter might be more famous in its “Thump Mix” reincarnation, as heard on the 1993 “Soul By the Pound” single and in the accompanying video. On a sidenote, the “Soul By the Pound” remix also replaced Common’s clearly voiced discontent with the increasing presence of whites in rap with freestyle lyrics that weren’t liable to hurt anybody.

“I ain’t out here tryin’ to be a bully / nor am I proclaimin’ to be a two-shoes goody,” Common Sense says somewhere on his debut. Which, in regards to his own role, might be the most sensible thing he says. Fresh off achieving Source Unsigned Hype status in October of 1991, Common had yet to find his destiny as soul brother #1. Looking back, it is evident that the best was yet to come. But even with a maturing process ahead of him, “Can I Borrow a Dollar?” is consistent with Com’s later catalog, as the undeniable charm and charisma are already in full effect.