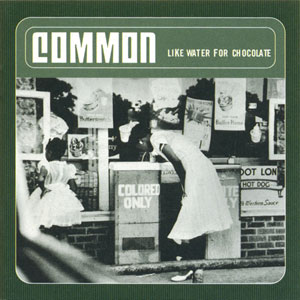 It’s relatively easily to liquify an popsicle – the substance it is made of is liquid at room temperature and only maintains it’s shape when frozen. Chocolate (unless we’re talking Hershey’s Syrup here) is not so naturally liquid. To liquify solid chocolate requires higher temperatures, depending on the type and flavor. Milk chocolate is betrayed by it’s own first name and liquefies easily; however a darker richer chocolate will be slower to bubble up and melt.

The curiously uncommon rapper named Common is definitely a darker brand of chocolate hip-hop soul. He may be slower to heat, but when poured over creamy smooth tracks the taste of his raps is that much more delicious. Unintentionally Common nearly puts a frosty chill on his own brand of raps – after starting his fourth album with “Time Travellin'” and turning up the stove on “Heat” he nearly deepfreezes the action with “Coldblooded” – a good enough song generally speaking but one which does not satisfy our craving for the sweet soul of Common. Interestingly though, he says “I be dissin magazines, and then buy The Source,” and does provide a thorough analysis of both self and general hip-hop hypocrisy.

The album quickly simmers to a much higher temperature though with “Dooinit” – a song so (unintentionally) controversial it actually got Chicago’s favorite son banned from the (supposedly) lofty annals of New York’s own Hot 97 FM. Read literally the song comes across as an indictment of overly commercialized rap of the Puffy and DMX variety – the very kind that lines the pockets of fat cat urban radio executives. It wouldn’t be hard to imagine that a man who once said in concert “If you wanna join the crew well you must see me; you can’t sound like Ma$e or the one Puf-fy” meant it exactly how it comes out even if he doesn’t name names (though Sean Combs’ preferred brand of auto is mentioned).

Common does not spent undue time dwelling on these themes; or else the unstirred chocolate might lump or coagulate along the edges. “Funky For You” has the assistance of funkateers Bilal and Jill Scott and lives up to it’s nom de plume with Com’s unusual “uh” stutter step reminiscent of Kwest Tha Madd Lad’s “Skin Care” (if that’s too esoteric for you, just assume the shit bangs lovely). Mos Def’s cameo on “The Questions” only raises one relevant inquiry: why was this his only guest appearance? The answer is self-revealing – Mos Def is dope without question but Common is getting his turn to shine.

It’s possible the temperature has never been hotter or that Common has ever shined brighter than on DJ Premier’s deeply stirring “The 6th Sense” which may give you as many cold chills as the movie. Cinematic references in fact are not beyond the fold for Common as he calls himself “Morpheous in this hip-hop ‘Matrix’, exposin fake shit.” This song is not only in the lineage of his “I Used to Love H.E.R.” it takes H.E.R. to mountain peaks of unparalleled clarity. So crisp and precise it might even cool off the heated raps – until the skit “A Film Called Pimp” and the Bonnie and Clyde battle rap “Nag Champa” keeps it fiery.

This album never really slows down past the halfway point. Even the guest appearance of Slum Village on “Theolonious” can’t cool Common’s hotness off. From “Payback is a Grandmother” all the way to the finale “Pop’s Rap III” you’ll find your ears have been smothered in a sweet darkness that Dove has never been able to wrap in foil and sell for ninety-nine cents. You may in fact be coming down off a hip-hop sugar high. Not to worry – just hit random play and any track on this album will give you another fix.