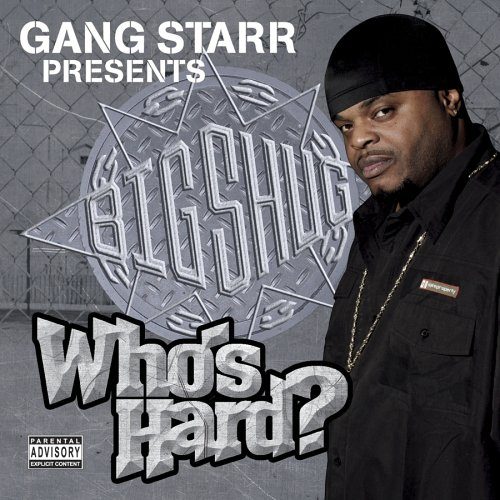 Big Shug is one of those rappers who year after year would cause you to say, “Whatever happened to son? Didn’t he have a CD coming out? Where is he now?” Shug has gotten his rep over the years from close association with the GangStarr Foundation. From 1994’s “Hard to Earn” on you could count on him to make at least one memorable guest appearance on each release, starting with “F.A.L.A.” and continuing underground favorites like “The Militia.” Shug’s heavy slow flowing voice and street soldier attitude stood out in contrast to the much more mellow and relaxed Guru, although when paired with Shug on a GangStarr track he seemed to get harder by association. Every now and then a DJ Premier produced single like “Crush” or “The Jig is Up” would hit stores, but for whatever reason ten whole years went by without a single full-length solo album dropping.

In 2005 all of those long-standing expectations finally came to a head in the form of two releases – a “Never Say Die” compilation featuring his best singles and cameo appearances plus some “Pre-Album” material in April, and the “Who’s Hard” album in September. The first album was easy enough since a lot of the material he already had could be recycled, but for “Who’s Hard” Shug has to hold down an entire album’s worth of new raps, largely on his own. Shug already had one ace in the hole though. His close association with DJ Premier results in the highly respected hip-hop producer working on 8 out of the album’s 20 tracks, and on top of that underground favorite Alchemist has 2 more. That means at least half of the album has to be tight… riiiiight?

“My life and my dreams, all went up in smoke
Too damn strong to hang myself by a rope
One day in my cell, feelin blue
I got a kite from my main man Guru
He told me what to do
He said if you get your shit right there’s a chance for you
Right then, it hit me like a metal pipe
I’ma rock mics for the rest of my life”

“No Mother, No Father” certainly indicates that Shug is serious about his rap career, to the point he took Guru’s advice and gave up his criminal lifestyle. That’s certainly to be commended, but let’s make an important distinction between being serious about something and being great at it. A lot of people are serious about being athletes, but not all of them are great enough to make it to the Olympics. Or looked at another way, you can be a standout football player in your high school but that doesn’t mean you’re getting a collegiate scholarship let alone making it to the pros and getting a fat NFL contract. Even with expansion teams and player turnover, conservative estimates say at least 98% of college athletes who lace up for a game won’t play in the NFL. Hip-Hop may not have amateur and pro levels like competitive sports, but there are plenty of aspiring rappers around the world who will never even release an album on an established label let alone sell enough units to make a full-time living at it.

What Big Shug has going for him – confidence. He truly believe he’s “Too Hot” for any other MC in the rap game to even touch him. Confidence + a connection with some good producers can equal hot tracks from time to time. Shug is solid if unspectacular on joints like the slow-paced and beautiful Premier sounds of “Really Real” and the menacing Mobb Deep style melody of “Who’s Hard?” The most effective track on the whole album is Premier and Shug’s “The Way it Iz” collabo’, where Preem’ creates a beat packed with fat heavy bass drops that fit Shug’s extra large vocal stylings like a glove and scratches a chorus of lyric samples to perfection. If at any point Shug’s rhymes can be called clever or witty, it’s here that he finds inspiration and catches some wreck:

“I’m not the, _Lord of the Rings_, I’m the lord of poppin them things
Settin you up, and takin your bling
Hoes love the way I spit it though
Cause of the +Speakerboxxx+ they give me +Love Below+
I’m from Murderpan where they raise no snitches
But some cats still do, I navigate
nicely around them cats, you snitch on me?
They find your ass out back
Bein chewed on by the pigeons and the rats”

Unfortunately even when he’s at his best, Big Shug has some hugely glaring faults. It was easy to overlook the weaknesses to his style in brief GangStarr cameos, but served over 20 tracks it’s apparent that Shug’s rap flow is lacking. It’s to Shug’s credit that he doesn’t try to spit a fast rhyme style that wouldn’t suit him, but even at a slow tempo he can barely keep up with the beat. Some rappers with a non-stop barrage of great punchlines can get away with this technique or lack thereof (think Thirstin Howl III) but calling Shug’s raps simplistic for the majority of the album would actually be an overstatement. The first few bars of “On the Record” are an instant turn off: “Ain’t no one above me/I sip bub-bly/and still spit love-ly, I’m that nice.” Ouch. Sorry Shug, you’re not that nice. Eventually listening to his somewhat engaging deep voice is overriden by the fact you can’t get over his constant A-B-A-B raps like “I’m just that bad, I’m just that mad.” If he only did it occasionally that would be one thing, but that’s Shug’s style in a nutshell, and he doesn’t deviate from it no matter how hard Primo tracks like “Bang ‘Em Down” and “Counter Punch” featuring Guru try to lead him in a different direction. The lyrics of the latter track speak for themselves – there’s just nothing impressive about rhyming “butt” with “what.” It just plain sucks a nut. To his credit he does manage to pick up the pace of his flow a little bit on the track. Ultimately though it’s still whack. (See I can do the Big Shug rhyme style too.)

It’s natural for a hip-hop head to want to like anything associated with GangStarr or produced by DJ Premier. Unfortunately that formula has resulted in some terribly whack rappers with unbelievably great beats over the years. We all remember the unfortunate album by Group Home that would have been much more enjoyable as an instrumental release. Big Shug isn’t quite as monotonous as Lil’ Dap vocally, but Dap at least made up for his shortcomings by having good breath control and actually writing a decent rap here or there, plus Melachi the Nutcracker provided relief as a tag team partner with his higher pitched voice. Shug has no partner for most of the album, and cameos by the likes of Freddie Foxxx are too few and far between. God bless him for trying, but “Who’s Hard” just proves to be a well-produced album that’s too hard to enjoy from start to finish. You may want to pick a few songs a la carte from iTunes, but I can’t recommend buying the album as a whole. I hope Shug has options other than rapping in the long term.