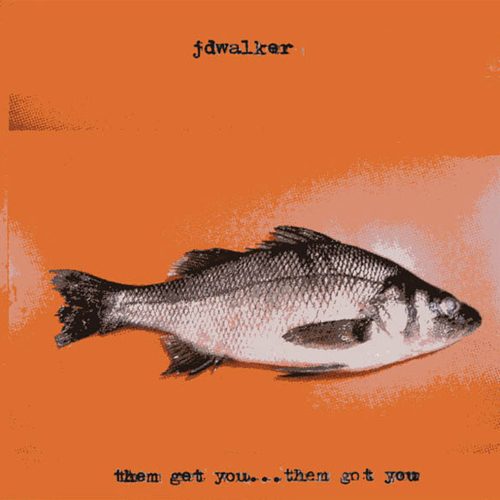 JD Walker :: Them Get You… Them Got You

Will anyone listen to it? A few more artists should be seriously asking themselves that silly seeming question, especially these days, when anything seems to go in the rapidly transforming realm of hip-hop. I hate to be one of those sticklers, one of those back row assholes that yell, “Where’s the beat?” just when everyone else is feeling it, but I can’t help it. As much as I try, as progressive as I want to be, I can’t seem allow what really amounts to a sonic porridge of growling off-beat lyrics and plodding production gimmicks pass through my mind unmolested. Yes, molested, the dirty way.

JD Walker’s “Them Get You… Them Got You” is hip-hop for whom? Is music for whom? I’ll admit that it may appeal to those more visionary than I am – (white) hip-hop fans raised on those suburban favorites, NWA, who are turning the genre into something that they can more readily identify with than “Straight Outta Compton”. This is a good thing. So why does it make me so unhappy? No good reason. Hip-hop is being remolded through the lens of a new audience, a new set of influences, and a new culture, but that doesn’t mean it’s being done well.

JD Walker is pushing it, and not Anticon pushing it, as intimately connected to that bellwether of experimental hip-hop as he is (Sole’s protÃ©gÃ©). He’s that restaurant with blue ultra-lounge lighting, still serving glass noodles and hamburger wrapped in a tortilla even though no one ever liked fusion. Okay. Apologies again, there has been enough of an intro here, enough of one to at least clear the field of anyone who is as put off by the Anticon phenomenon as some people I know are. We can get into the meat, or what meat there is that can be mustered.

The album is a product of some of the more prolific and myspace-ific artists out there. Bleubird, Sole, Alias, K-the-I, and JD’s velvet-tongued label mate Sontiago, all pitch in to make Walker’s album one of the more heavily stacked releases this year (at least as of its January 9th release date), and “Patients People”, with both Sole and Sontaigo both pitching in, is the best track the album has to offer. Sontiago’s drawn-out-toffee chorus slides over dark Santa Esmerelda guitars and booming hollow bass kicks, and JD, maybe trying extra-hard because Sole’s in the studio, pulls off one of his best verses, in a reverbed lip-tangled style that unfortunately made it rather difficult to transcribe here (I tried, I failed, sorry).

Go ahead and imagine it though, Sage Francis without the rhymes, Slug without the sure-footed flow, Busdriver without the weird, Buck 65, well, a lot like Buck 65. And that’s the best verse. What you’re left with is not much at all, an album of garbled rap-song over unconventional instrumentation; bill it as a breakthrough, or bill it trash. Speaking of the production though, is where I will briefly duck out of my apparent vendetta – at least when it comes to JD’s guest producers.

Walker, who himself produces the majority of the album tracks, favors either over-expanded acoustic guitar (“Know no Company”), or a generic buzz that is so useful that he can’t help but use it over and over again. Sole, in the few tracks he handles, taps into a reverberating instrumentation suite that gives his tracks a stronger flavor. There would be more good things to say if one of his productions, “Maine Wharf”, didn’t have such a grating buzz in it that I thought my speakers had blown out.

If I’m being unfair, it’s because I simply don’t understand the album, and with the tentative exception of “Patients People”, there seem to be few reasons to listen to it. I’ll admit, JD Walker has been set-up as somewhat of an example here, a symbol of that lately attractive trend in music, the “sounds shitty” motif. “Them Get You… Them Got You” is self-serving, a project that exists simply for the sake of creating, for the sake of art, for the creative experience, not to make music. While I will not judge those goals, I will say this. It certainly does not necessarily result in good music.