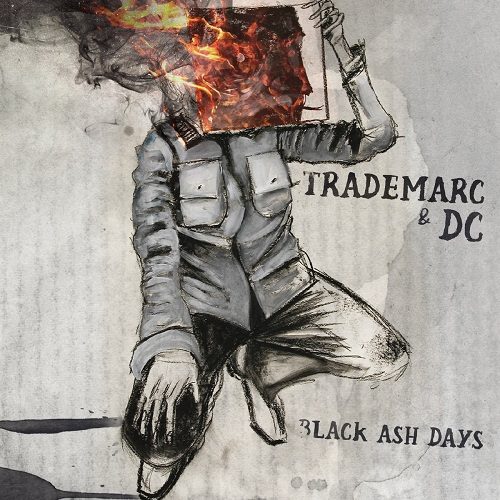 Trademarc is an emcee you’ll know of from his work with Esoteric on the East Coast Avengers albums, or more likely, from the album he did with John Cena. Yep, John Cena, the same guy who has been the WWE Champion a whopping fifteen times – Trademarc can be heard on his theme song “The Time is Now”. When you consider that John Cena’s song plays every Monday night on (surprisingly) Monday Night Raw, to millions of viewers around the world, Trademarc is a rapper who potentially has the same listenership as any radio mainstay. Mention Trademarc to a teenage rap fan though, and you’ll likely be met with a perturbed reaction – outside of underground Hip-Hop heads in the know, his career is the living example of John Cena’s catchphrase “you can’t see me”.

Before approaching this album with any of my usual light-heartedness, it’s worth noting that Trademarc has suffered from clinical depression and has tried taking his own life numerous times. “Black Ash Days” is a warts-and-all record with some revealing lyrics. It’s not often that an emcee will share their emotional vulnerability with listeners – I’ve not heard anybody tackle such topics since Pharoahe Monch’s “P.T.S.D.” this time last year.

Depression is horrible, and a problem that remains stigmatized by those who don’t understand what it’s like. It’s also an issue that is most prominent in males, who often hide their true emotions for fear of portraying weakness. So before I dig in to the songs, I want to salute Trademarc for addressing such an overlooked area of modern life, as well as for staying strong through the toughest of times when giving up feels like it could be the solution.

“Black Ash Days” isn’t necessarily a morbid listen, let’s just clarify that straight out of the gate. DC (a.k.a. DC the Midi Alien) provides his usual thigh-slapping snares and simple yet effective melodies, ensuring the heavy lyrical content doesn’t become overbearing. The first song is proof of this, as DC’s instrumental adds dramatic violins as Trademarc shares how he used to be an outgoing young man, and gradually became enveloped in depression, only able to see one day at a time. Faith is called in to question on “On Deaf Ears” as Trademarc shares how he lost hope and that his prayers appeared to fall on deaf ears. “All of Me” highlights the mood swings and closed down emotional state that depression “consumed him with glum doom”, and how it often felt that the solution was always temporary (“I’d build bridges over lakes that I’d eventually burn down and break”).

The aforementioned dismissal of depression by many men is shared on “A Lesser Man”. The volatile mental state that Trademarc experienced is described vividly, and just as the susceptibility to suddenly lose his temper and do something out of character may see him labelled as a lunatic or psycho, which are facets of respected artists’ characters (particularly in Hip-Hop – Tech N9ne, Eminem), but do it in real life and you’re unlikely to receive the same reaction. It doesn’t make you less of a man, it shows that you are an emotional being who’s in a bad way. Each track on “Black Ash Days” helps highlight the numerous symptoms of clinical depression, “Corrosion” being one of the most important. Little annoyances and the steady decline in to a constant low mood, where tiny holes gradually tear your mind apart until you’re in a hole yourself. Some of the lines are particularly memorable: “I don’t count my blessings, I count my scars”, speaking to his mother about how he can’t help how he feels, and the second verse describing blackouts is eye-opening.

The Megan McKenzie Downey feature on “The Familiar Rope” isn’t as satisfying as it could be, and while Trademarc nails his verses flow-wise, the talk of devils and evil deeds didn’t grab me as much as the other tracks. Thankfully, the majority of “Black Ash Days” is a great, albeit intense listen. Of course, I can’t relate to everything on this album, but I understand the importance of what Trademarc is saying. This album could genuinely save lives.

The final track on the album even includes vocal clips from Marc/Trademarc’s friend, who went to visit him at the psychiatric ward the day after he tried to take his life. Coupled with the video, this track brought a tear to my eye. While other rappers are glorifying death and enforcing the superficial, quick-fix approach to happiness, Trademarc and DC have blessed us with one of the most heartfelt, moving Hip-Hop albums of 2015, tackling the important subject that is mental illness.

If you’ve ever been in a dark place or had suicidal thoughts, this is an essential listen that shows that things can get better. And to quote his colleague John Cena, Trademarc’s time isn’t up, his time is now.