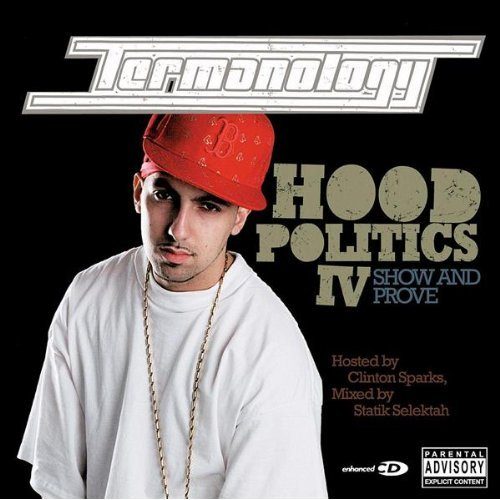 Going from internet “YouTube” plays to heavy rotation on the radio, half Puerto Rican half French emcee Termanology, hailing from the 978 just north of Boston, Mass., has definitely grown in the ranks among unsigned artists. Not only that, as an emerging artist, he has been featured in XXL’s “Show and Prove” and The Source’s column calling attention to up and coming rappers. To top it off, the release of “Watch How It Go Down” from his newest album “Hood Politics IV” that drops today was produced by none other than Gangstarr’s DJ Premier and proves to be a plus in any rapper’s books.

This 25 track mixtape of new releases and oldies, but goodies, features cameos from Papoose, Lil Fame, Mighty Sam McClain, Trife Da God, Royce Da 5’9, Prospect of Terrror Squad, Dre Robinson, and other cats representing his crew ST. Alongside DJ Premier’s production skills, Roc Raida, MoSS, J. Cardim, Mr. Attic, Statik Selektah, and DC, who produced Termanology’s “Out the Gate,” provide their skills to the albums as well. Although Termanology’s fourth edition in his Hood Politics series remains positive in areas such as beats and occasional lyricism, it lacks in structure and variety in order to keep his audience interested throughout the album.

Many times throughout the mixtape, I felt lost in a sea of tracks that seemed as though they had been jumbled together into a hodgepodge of miscellaneous music. It was like I was playing Russian roulette with the albumâ€”I was not sure what I had in store for the next track whether it be something authentic or something mediocre. One minute he raps about the overused, tiring subject matter of gun use, gangbanging, and shotguns blazing in “79 Murders,” “Blow the Horns,” and “Got Em,” and in the next he suddenly turns sentimental as he wants his daughter to be a carbon-copy of himself in “Just Like Me.”. Hmmmâ€¦let me think about that one. I don’t know about all of you, but little girls shooting guns and selling drugs just doesn’t seem so appealing to me.

Unnecessary tracks such as “Winter,” featuring E3, has Term juggling and comparing a White girl and a Spanish mami during one summer and while reminding me of an eighties power ballad from a hair metal band, “Different World” did not fit in as well. This sure as hell wasn’t a Motley Crue track, so I’m not quite sure as to how I was supposed to fit it in with the rest of the album’s production of predominantly hip hop beats. Trimming down the fat in the album may have helped to keep the tracks more fluid from one to the next and may have helped to steer away from the haphazardly chosen tracks similar to those seen in many other underground hip hop albums. In other words, we really didn’t need to be exposed to the entirety of the nonessential 25 track saga.

A bit repetitive, the subject matter on hand about the difficulties of coming up in the rap game and the struggles that need to be overcome as an unsigned rapper are excessive in numerous tracks, making the album very predictable. Don’t get me wrong. The production of “H.U.S.T.L.E.R.” with its slow, harmonious strings, the upbeat, almost seventies inspired “Can’t Get Enough” featuring the singing of Jordan, and “Good Conscience” excels, but at the same time, lacks as whole because of the overuse of this one topic. In other words, I got the point after I heard the first one and didn’t need to be reminded a second, third, and fourth time about the woes of an emcee trying to make it in the industry. Although “That’s Life” is yet another track that pinpoints the life and times of an artist exposed to the grind, I particularly enjoyed this track because it reminds me of simple west coast Bay Area beats and stays focused in its positive message. Termanology keeps it real and ends with the disclaimer that so many people forget as he says, “Shit is real man. I’m on commercial radio every week. I’m on BET. I got CD’s in the store. Guess what? I’m still fuckin’ broke. So, don’t think you can all get up in this rap shit and start making millions overnight. It takes a lot of hard work. Shit is real. That’s life.”

Amidst the occasional disarray, “Hood Politics IV” never ceases to amaze the masses with some pretty stellar, creative tracks. An ominous, eerie sound with ill cuts and production from Roc Raida makes up “100 Jewels,” but unfortunately, Term’s lyricism is rather lacking in this one with his crude and rudimentary rhymes. A soulful sample with melodic horns in “Think It Over” featuring Trife Da God ties in old school with a new school Wu-Tang kind of twist to introduce a bit of street knowledge in our everyday thinking. Term’s and Trife’s delivery only compliment each other in this impressive track. In a more poignant effort in “Far Away” featuring blues prodigy Mighty Sam McClain in the chorus and over a slower beat with a hint of an occasional horn, Term acknowledges all of his people locked up as he begins the track naming the “fallen soldiers” he knows and later shows the appreciation for his own freedom as he says “life is not a gift, it’s a privilege.”

Returning to the highlight of “Hood Politics IV” and possibly Termanology’s greatest hit since the beginning of his first tracks, Premo’s production of “Watch How It Go Down” provides the essence and backbone to the album. Term’s cadence only gets superior as he drops fierce lyrics about how life is seen through his own eyes and even manages to slip in some Pac and Biggie lyrics. The remix on the same beat featuring Papoose and Lil fame of M.O.P. adds some kick to exemplify hip hop in its purest form.

Although many make the comparison, Termanology isn’t quite the next Big Pun with his own proclamation of “I see myself as the holy resurrection of Pun, but if I ain’t that, then you name one.” Nonetheless, Term has matured with his lyricism and rhythm through the years and if he continues to maintain the legendary production from the likes of DJ Premier and other high profile producers, there may be word that he’ll finally get signed in the near future. Granted, Termanology is a noteworthy example of one of Massachusetts’ more talented emcees and as a young artist he has plenty of room to become more established and eventually “earn his spot.”