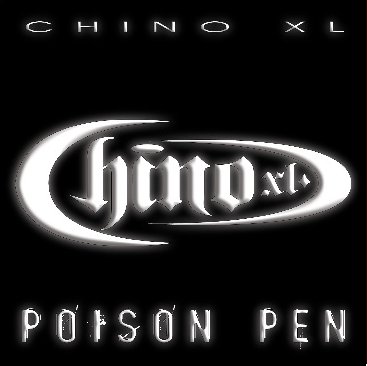 Chino XL’s career as a hip-hop artist could be written into a book titled “How to Get Fucked by the Business (and Pretend to Like It).” One of the most gifted and versatile rhymers to come along in the last decade of the twentieth century, Chino XL made a stellar debut with the punchline-laden “Here to Save You All” in 1996 only to find himself painted into a corner by the very talent he displayed. Despite being founded by Rick Rubin, a man who was himself a hip-hop pioneer, American Recordings had no idea how market or promote the rapid-fire witty rhymes of the latin rapper. After a half-hearted attempt to push “Kreep” as a crossover single (which despite being a smooth song had vicious punchlines like “should I take the 380, assassinate her like Selena” that required numerous censoring) Chino promptly disappeared from mainstream music outlets. Over five years later Chino returned to the underground with “I Told You So,” an album which sadly was even harder to find at retail than his original debut. To the faithful Chino was in fine form, but being gone so long he had lost much of the buzz he had going in and some of the beats were far from on par with his high caliber lyrics.

Fast forward to today and after another long hiatus Chino XL is back again with “Poison Pen.” Perhaps when you’re a lyricist on Chino XL’s level you really only need one album every four or five years, but one could also suspect Chino XL needs better label support and perhaps heWOULD release albums more often than that – here’s hoping Activate Entertainment is the one. I’m going to be honest with the people reading though – I’m reviewing a bootleg copy of this CD right now. I talked to somebody at the label and got a polite reply and the promise of a promo copy to review, but one never materialized in my mailbox. Chino XL has been screwed by this industry enough times already so I wasn’t about to hold it against him that his label was too cheap to hit me off with a review; he needs all the publicity and exposure he can get at this point. That being said if you’re feeling where RapReviews is going with this write-up do the right thing and buy a legit copy of the album, because I’m certainly planning to. Why? Chino is still one of the best rappers in the business hands down. He’s been around a decade already and shows no signs of rust, and can be instantly put up on a level with Gift of Gab, Lyrics Born, Pharoahe Monch and Ras Kass. One look at the lyrics to “Talk to You” should tell the story:

“Holdin on with all my might, kneelin clutchin rosary beads
Write and inscribe, fighting to keep my manchild inside alive
But I’m… too lost in anger
Trying to harmonize and become one with the moments
That I’m standin in abandonin aborted theories of life
Fury and strife, pestilent landscapes in the deserts of my mind
Tryin to find the oasis… my flow so racist
I don’t want to die holdin these fo’ aces
I’m known in most places (for what?)
For having lyrics that can fill 8007 whole book cases
But still I don’t speak!
I hate people more and more each day
But today I hate them like it’s next week!
And still I didn’t peak, verbally
Kind of like I’m playin hide and seek, who will be the one to murder me?
I take it back to Jersey, where I’m treated like clergy
Rhyme through a stethoscope in my open heart surgery
I make the sky bleed burgundy
I’m about to change my name to Earth
because you niggaz think the world of me”

Damn. The way Chino mixes hardcore punchlines with serious contemplation about his life puts him on a whole different level from his competitors. Even though the song is lyrically as hard as they come, including the closing line “the only thing I’ve got in common with these rappers rhyming is breathing oxygen,” the chorus is XL gently singing that he’d like to live long enough to see his kids grow old and “create works of art to last for years.” Congratulations Chino, with this song you’ve done both. For an even harder verbal attack check out his track “Beastin'” with Killah Priest, who himself has been consistantly underrated and shafted by mainstream outlets. As intense as Killah’s opening verse is, Chino XL steals the show:

“My saliva’s lava, the wicked anomalous scholar
The author composin your broken bones into an orchestra
Burn in Heaven, no weapon can harm me
These homos been in the closets so long I’ma donate them to Salvation Army
Calmly tearin ya flesh like the claws of a falcon
Write songs ’til my wrist develops Carpal Tunnel Syndrome
And there’s no feelin in my right thumb, my knuckles white and numb
You should see the muscular development in my forearms
I’m swarn human heron from here on
Consider Chino XL _Monster_, fuck Charlize Theron
You cling on to life like a skinny Luther
I’m like an aircraft carrier goin to war with a Mini Cooper
Gettin used to being crazy
as a double jointed female doctor bent over, delivering her own baby
Anti-medical, non-preventable
Make you and a dead man identical
Sallow arms and well-armed like an octopus tenticle
Bust ten of you, trust none of you
I’m the murdering minister when God is upset at you”

Such anger! Like revenge though, Chino XL is a dish best served cold. The more pissed off he and the faster he gets flowing, the better the punchlines and the delivery get. Chino XL delivers again and again throughout “Poison Pen” on wicked songs like the symphonic “Even if it Kills Me,” the metal rock attack of “What You Lookin At” and sadly enough a duet with Proof entitled “Our Time,” yet another reminder of how much he will be missed. The only thing that doesn’t come through on this album is the beats, which once again pale in comparison to both the intellectual complexity and verbal ferocity of Chino XL’s flow. Without liner notes I can’t tell you who laced these tracks, but I can guarantee you it wasn’t Alchemist or RJD2. For better or worst his first album with American is still his best produced, and the only hope of getting Chino better known in the mainstreams is giving him banger beats that could make one of his songs a hit no matter how much bile he spits. Until then Chino XL will still be frustrated by an underground fanbase that considers him a “Messiah” but still can’t get other heads interested in his shit. Here’s hoping it’s not five years until the next album.