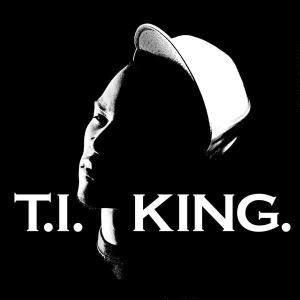 Clifford ‘T.I.’ Harris is all about his hustle. The title of his 2001 debut album “I’m Serious” probably should have been a tip-off but it was slept on by a lot of rap critics, including yours truly. Since then he has consistantly stepped his game up, coming with better beats and tighter rhymes each time around, from “Trap Muzik” to Urban Legend.” In the process a rivalry grew between himself and other Atlanta area artists like Ludacris. Some said it was all hype like Jay-Z and Nas, others said it was realer than Tupac and Biggie, but whether or not it was all exaggerated T.I. certainly wasn’t hurt by the publicity. His profile has in fact risen so far over the last two years that he is now co-starring in the major motion picture “ATL” that’s named after his hometown along with OutKast member Antwan ‘Big Boi’ Patton. Not so coincidentally his new album “King” is hitting records stores about the same time the film hits movie theatres nationwide. That’s serious hustle alright – each one raises the profile of the other and both make him more money – you can’t front on that! The Just Blaze produced opening track really says it all – “King Back”:

“I welcome you and get acquainted with the youngest in charge
Respected from East to West like he was runnin the mob
Dictatin, ain’t takin orders from no one but God
I know you niggaz is broke cause I know what you charge
You niggaz wishin for a Phantom, there’s one in my garage
It’s black as legary, right next to the platinum Ferrari
You niggaz ain’t gettin money off of rappin I’m sorry
Fuck around and went and spent 60 large on a Harley
Cause where he stay 10,012 feet not hardly
Now you see that we ain’t able to compete, now are we?”

Success breeds ego, and given T.I.’s success he’s certainly feeling like a “King” on the throne these days. His new album has already smashed the airwaves with the third track on this album “What You Know.” Long time collaborator DJ Toomp, the architect of previous big T.I. hits like “24’s” and “You Don’t Know Me” did it again on this track. A slow pulsing bass synth grumbles melodically in the background, punctuated by strong drums and claps, while samples of T.I. shouting “ge-ge-geyeah” and “HEY NIGGA WHAT” are strategically thrown into the mix. The catchy musical chorus and T.I.’s refrain “what you know about that/hey I know all about that” tie it all together beautifully. T.I.’s style is as much about what he says as how he says it, as his vocals reflect the relaxed confidence of a man who already runs the rap game, like the South’s own answer to Jay-Z.

“What you talking shit fo’ and gotta run and get folk
How you were yellin I thought you’d pull out a gun and hit fo’
But youse a scary dude, believed by very few
Just keep it very cool, or we will bury you
See all that attitude’s, unnecessary dude
Cause you never carry tools, not even square, he cube
You got these people fooled, who see you on the tube
Whatever; try the crew, they’ll see you on the news”

Typically a T.I. album features fellow Southern artists who are either popular at the time of his new release or legends of the scene for years. This album has both. U.G.K. appear on the Mannie Fresh laced “Front Back,” B.G. and Young Jeezy float over the light flutes and bass Nick Fury provides on “I’m Straight,” and Khao Cates gives a simple but effective energy to “Undertaker” featuring Young Buck and Young Dro. Some of the collaborations though will surprise long-time T.I. fans. Jamie Foxx croons on the smooth Keith Mack piano notes of “Live in the Sky,” while both Common and Pharrell appear on the Neptunes produced “Goodlife.” Such guest appearances could steal the spotlight from T.I. but even on the latter track he holds it down and hits with a more enthusiastic delivery and better verse than Com does:

“I was born into poverty raised I the sewerage
Streets always would be a part of me, it made me the truest
And even when my days were the bluest
I never ran from adversity, instead I ran to it
Fear ain’t in the heart of me I learned just do it
You get courage in your fears right after you go through it
Now I come through in a Coupe on 22’s
That ain’t bad for a nigga who ain’t even finish school
Don’t get me wrong I never been a fool
I just put off graduating for a pair of tennis shoes”

There’s plenty to be happy about on T.I.’s “King.” From the thumping energy of the Just Blaze beats and fiery rap rhetorhic of “I’m Talkin’ to You” to the smoothed soulful Khao Cates beats on the “miss you girl” narrative of “Hello,” Atlanta’s self-proclaimed king wears many different crowns and they all seem to fit him well. He’s a player when macking, a gentleman when balling, a gangster when riding and a thoughtful observer of the streets all at once. T.I. isn’t necessarily a poet laureate who will go down as the all-time great rhyme writer of hip-hop but he knows his role and doesn’t overreach and try to compete on that kind of level. It’s for that very reason songs such as “Ride Wit Me” are so likeable and effective:

“See me ridin through Atlanta in a Phantom wit the double do’
Make these bitches wonder what he be in so much trouble for
I’m touchin folk, anytime they try and Grand Hustle folk
Then bustin folk, what the fuck they argue plus they cussin fo’?
You lucky hoe, a couple of years ago I’da probably cut your throat
But fuck it though, what I’m spendin somethin on a nothin fo'”

Well said. T.I. doesn’t need to worry any more, he’s got the life and he’s enjoying living it. Don’t hate, celebrate. Roll with the “King” as it has it his way and you’ll find he has it your way too. First print runs come with a bonus DVD, so if you cop one early it’ll be money well spent.