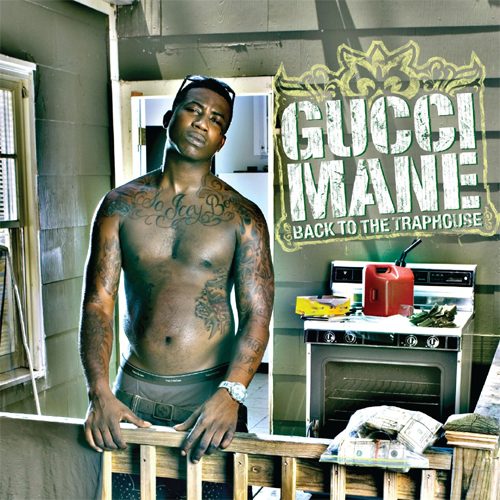 Gucci Mane :: Back to the Traphouse

I’m going to be blunt here – this is not going to be a long review. Two years ago I was severly underwhelmed by the major label debut of Gucci Mane on “Trap House.” He declared himself to be an “entertaining thug” and my thoughts were that he was anything but. His most notable accomplishment at the time was being arrested on murder charges, and his most notable accomplishment since then is having said charges dropped due to a lack of evidence. To be honest I don’t believe he was involved in the murder in the first place and the whole thing was just a series of coincidences that pointed in his direction, but that’s neither here nor there – Gucci Mane did not strike me as a talented rapper. Nothing on “Back to the Traphouse” is doing much to change my opinion. Let’s take “I’m Cool” for example: “I count a hundred grand then I ate some cereal/Then stuffed a brick yeah in a box of Cheerios.” Wow – that’s some profound shit.

It appears Gucci is now at least loosely affiliated with Disturbing Tha Peace as the membership make appearances throughout including Luda on the aforementioned opener, Shawnna on “I Might Be” and “Ballers,” and since Rich Boy got some pub at the underground level for being on a Disturbing Tha Peace compilation it doesn’t seem a coincidence that he’s on “I Know Why.” This song is actually one of the few good reasons to buy this album – it’s got a smooth Butler and Rio beat and one of the last guest appearances of the late great Pimp C on any rapper’s record. I’m sure a few more posthumous guest appearances will come out in the next three to six months but this one is as fresh as the release date of December 11th and stings that much more as a result.

Beats and guest appearances are one of the few strengths of “Back to the Traphouse” – even The Game drops in for a cameo on “I Might Be” while Reefa hooks up a solid beat on “16 Fever.” Other noteworthy tracks include “Drink it Straight” featuring Trey Songz and the smooth “G-Love (I Don’t Love Me)” featuring both a silky beat by Allstar and silky vocals by LeToya Luckett. Unfortunately for Gucci Mane his raps are just as inane and dare I say ignorant as ever. I’m happy he beat the charge and can make a legit living recording albums, and I’m sure with better beats and guest artists this album will be more successful than “Trap House” but I still can’t strongly recommend it given Gucci Mane has a terrible mushmouthed delivery, poor rhymes, and nothing at all to say.

Gucci Mane :: Back to the Traphouse
5Overall Score
Music7
Lyrics3.5