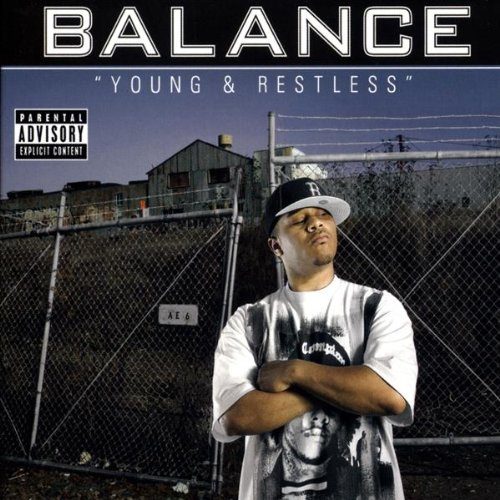 Oakland native Balance has coined his sound and rap style “The New Bay.” It’s a message to the old generation and a brash assertion of skill from the next generation, one made not out of disrespect but as a wake-up call that “the West Coast isn’t really popping like we used to.” Reading his bio at SMC Recordings you get the feeling his rap name is no joke. He’s equally split between name-checking commercially successful acts like Too $hort and underground favorites like Mystik Journeymen. Now how could you not want to peep his game on “Young & Restless” after reading all that? This writer was definitely wondering if Balance could really live up to the name and combine such seemingly disparate styles cohesively. To be honest I can’t even say I’m sure I’ve heard him before – said bio credits him with being on a “Wake Up Show” intro but it’s been a long time since I had a West coast hook-up to make me KMEL tapes. Back to the point though – Balance starts out firing on all cylinders with the E-A-Ski produced “Let the Bass Go”:

“I’m a beast; sleep and I eat with my feet
Keep heat like an oven when I creep
On the street I’m the Bay, mix, king
Others talk shit but they ain’t ma-king
money kinda funny when niggaz was lookin bummy
Nobody want nuttin from me and niggaz out here is hungry
So I, feed the street, with rhymes and beats
to keep the weak, far far away from me
The block is fiendin, knockin leanin
I.M.G. is the formula, Balance the meanin
of raw shit, y’all spittin cautious, nauseous
Listenin to the next MC flossin is horseshit
Let the bass go”

In fact the underrated E-A-Ski checks in twice more on “Young & Restless.” He laces and cameos on the hyphy bouncing “It is What it Is” and provides a refreshingly stripped down drum track for “Gotta Get It” where Balance declares himself “Mike Vick of this rap shit.” Beats are not in short supply on this album. Left Did It comes hard with some extra-distorted synth on “O Yeah” featuring The Frontline, Erk Tha Jerk heats things up with the steamy “One Night Stand,” and “Roll Wit Me” pounds out a simple and effective track by the Beat Credentialz. Don’t know the names? Don’t sweat it. What matters most is they work, and the latter worked well enough to draw in Chamillionaire for a cameo. He can’t upstage Balance though – this is his show:

“She scandalous
She act just like an evangelist
I melt more wax than a candle get
Cham’ stack me damn, peep the manuscript
Nigga I demand a grip, come roll with me
Me, I show you how to get up on your P
P, pimpin ain’t a hobby nigga we
We, do this every day ea-sy
Nigga you feel me?”

Balance’s style is deceptive. His flow is spit with a relaxed confidence that sometimes seems lazy, but it’s bolstered by crisp diction and a deep tone voice that’s remarkably free of West coast cliche. He’s not inventing the slangulation that the Bay is known for but that doesn’t mean he won’t employ the pioneers that do on this CD given that Keak Da Sneak appears on “What Up” and Casual drops in for “Look.” On the latter Balance shows his versatility by picking up the tempo and dropping a style you’d be perfectly comfortable with hearing on a Hieroglyphics CD:

“Remain in your brain like thoughts you can’t change
or take back, I hate rap, niggaz is whack
And mistake that – fake shit for me
Survival of the fittest, y’all history
A blast from the past, I don’t rap for the cash
I rap to rap circles around yo’ ass
Balance and Smash Rockwell, better rock fast
Better rock first nigga, better rock last”

To say Balance is making a perfectly seamless transition from New Bay underground to the big time would be an overstatement, albiet not THAT much of one. The Bedrock produced “Grind” seems like it’s unnecessarily trying to borrow from an East coast sound better suited to Fabolous or the Young Gunz. Aristotle the Great tries to get cute with a repetitive sing-along melody on “Paper” and Balance should have shot it down before ever rapping on it. Last but not least I know Balance wasn’t intentionally trying to copycat Murs on “Hustler,” but spelling out the word in the chorus instantly made me think of his “H-U-S-T-L-E” and quite frankly it’s a much better song. Small mistakes aside Balance shows a lot of potential and a surprising amount of stylistic versatility, always bonded together by his common theme of “New Bay” taking the West to the next level. “Young & Restless” may not get the scene there singlehandedly but it feels like 2-3 steps in the right direction.