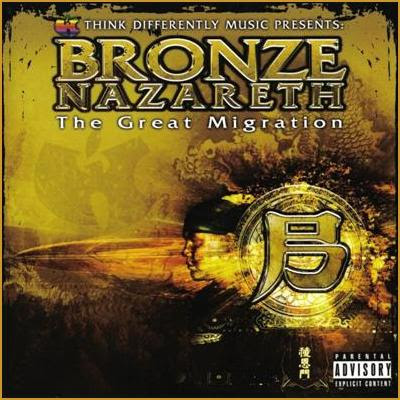 Wu-Tang Clan fans are always looking for a reason to proclaim “The Wu is back!” Though odds are slim that they’ll regain the rap chokehold they once had, Wu-Tang is here to stay, still growing, and still mostly true to its original aesthetic, itself a marvel in today’s bullshit rap world where a few similar songs are labeled “a movement.” The Wu, though buoyed in a high-profile way by Ghostface’s unerringly dope albums, has stayed alive in part due to the fact that their movement actually WAS a movement. Maybe I should say IS a movement, because in 2006 Bronze Nazareth is on some Wu shit like ain’t a damn thang changed since ’93.

This album marks the second LP under the umbrella of Dreddy Kruger’s (a signed Wu-artist now concentrating on expanding the Wu) Think Differently imprint on Babygrande. The first, Wu-Tang Meets the Indie Culture, was an attempt at matching Wu-Tang all-stars with current indie rap pros. The message, seemingly, was “Wu-Tang is not out of step with the best of the newest.” The disc was mostly successful. This time, Dreddy has focused on an artist that dwells on the quirky chessmaster meets cultural historian mindset that the RZA adopts from time to time, the most meditative of chambers. So it is that instead of trying to convince you that the Wu is still relevant, Dreddy Kruger and Bronze Nazareth find strength in patented Wu-Tang rap anachronism.

Straight out of Detroit, Bronze Nazareth must have been a rap ripple when Enter the 36 Chambers came out, but he steps into the limelight here with a fully formed steelo that bleeds Wu-Tang every step of the way. He’s hardcore and sounds like he’s been through some shit, but he waxes philosophical instead of coming off hard and ignorant. He shapes his similes and metaphors into the craftiest of darts, occasionally overreaching, but likeable due to his obvious attempts at thinking outside the box. He’s not Cappadonna (who makes no sense and answers haters with, “You can’t handle my mathematics”), but he doesn’t have the verbal exactitude of GZA. At his best, Bronze Nazareth spits like Masta Killa, obtuse and abstract when talking about simple things, succinct and eloquent when touching on complicated concepts. When he’s on, he’s way deeper, more original, and just plain more poetic than most cats out. For the lyrical talent he displays here, the scary part is that he may be a better producer than rapper.

The Bronze Bomber (my nickname, not his) owns a production style that is both derivative and distinctive. You’ll recognize his sound immediately if you’ve heard RZA’s Birth of a Prince LP, but for the uninitiated, BN’s soundscapes prominently feature samples of old dusty pianos, organs, woodwinds, strings, creative drum patterns and sounds. Running the continuum from grimy to wistful, his beats share a common lushness, the result of sounds complimenting each other. He’s worlds away from the break-your-brain simplicity of snap-hop (a “genre” soon to be forgotten).

On Black Royalty, he’s not afraid to let a spectacular combination of clarinets and horns stand alone, leaving out the boom-bap to focus attention on his words. This kind of attention to each track’s purpose and value is what makes BN different than his peers. On the same track, he samples an eagle screeching. It’s a small touch, but it sets the mood. His choices for vocal samples are devastatingly blues-ridden, dripping with sorrow. As he makes abstract art out of old music, he focuses on natural sounds played with human emotion, but aligns his samples with an almost classical ear for composition. He’s on another planet than slick, high-voltage, club bangin’ digitized beatsmiths.

A rare example of an MC that should be allowed to rhyme over his own tracks, Bronze Nazareth gets points for so clearly laboring over his similes and metaphors. For example, how sick is he? Sicker than sea-sick slaves. What sound does his gun make? Claps like the sound of a thousand books closing. Check him out on Black Royalty spitting with calm resolve:

“I could write a sunray, author a full moon’s light
My words are sutures to a broken future
Let’s stitch clouds together, lifted to God when we lose ya
I speak planets, think mountains, deep fountains, bleed messages
Tell the welfare kids!
Place Saturn’s rings around a splattered kid’s wig”

But it’s not all blistering poetry slam. Bronze also writes topically about getting jerked around in the record biz and his favorite MC’s. He had me open when he revealed that, while he mourns Pac and Biggie, he misses Pun the most. Me too. A moment of silence please.

With high-energy guest shots by Sean Price, Prodigal Sunn, Killah Sin, 12 O’Clock, and Timbo King, The Great Migration reaches out to Ruck and Wu-familia alike, showing that, if he wants to, Bronze Nazareth can rip a track alongside some thorough-ass MC’s without needing to sermonize with his hard-edged near spoken word.

The Great Migration itself is the name for the post-Civil war movement of blacks from South to North, but the title here stands as an unclear reference. Maybe he’s pointing to the distance the Wu sound has traveled from Shaolin. Maybe he’s referencing the still unequal billing the United States gives to minorities, making a case for the further migration toward equality, another touchstone of his rhyme-writing. But to me, an element of the album title lies in the fact that Bronze Nazareth has clearly broken away from popular rap’s great migration toward hollowed out mediocrity. Face it, the Wu is back.