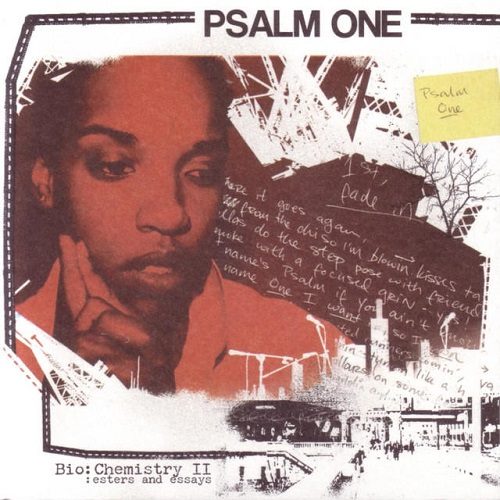 I wonder if they knew little Christalle would grow up to be so nasty she’s nice. Before “Chemistry” was in her future, this product of the Chicago neighborhood of Englewood sang in her church choir and expressed more interest in playing other musical instruments than in being an instrument of change in hip-hop. Christalle Bowen got exposed to more than her fair share of the music and culture though, which is not hard to believe given her Chi-Town home gave birth to everybody from Common to Da Brat to Twista. When she started busting rhymes while studying at the University of Illinois, the style that came off on the mic was a little bit each of those three but a lot all her own. Perhaps that’s why she chose the name Psalm One as a rapper – an old prayer but a new beginning, starting from the first verse but writing a whole new book of poetry. Her first full length album continued the play on words with “Bio:Chemistry,” given that Christalle was a chemistry major in college and that “biochemistry” is the study of life, so in essence the album was both autobiographical and introspective.

With “Bio:Chemistry II: Esters and Essays” Psalm One has essentially repackaged that original release with several tracks ommited and several new ones added – five apiece to be exact. The short story would be that it’s a significant enough change that you’re not getting ripped off if you had the first one, but the longer story is that there’s no way Psalm could rip you off if she tried. Hip-Hop culture often embraces and celebrates the nubian goddess, but rap music often tries to relegate her to a groupie or a hoe. Everybody complains that there aren’t any Lady of Rage or MC Lyte artists any more, but nobody buys the albums when Bahamadia and Jean Grae release them. Psalm enters into this fray with her head held high and her hips don’t lie; quite frankly neither does her voice. If Christalle learned anything from chemistry it’s that combining seemingly disparate elements can create wholly new structures. Even when the track seems to have a soft title, like the Seandamon produced “Sugar,” Psalm One comes hard as crystal:

“Want some ice cream this year? I’m scoopin ’em out
Gettin some cream this year, fool I’m bootin you out
A real team this year’s what I’m claimin, fuck the fame and the glitter
Whippers came bitter cause I’m shittin this year
Hey look at me some time
Eccentric in fact
Destined to blow yo’ mind, effervescent on tracks
Blessing cause I’m di-vine, heaven sent me to rap”

Psalm fills the room with her voice when she spits. She’s not timid and high-pitched, but neither has she gone butch. She’s all woman who just happens to spit as well if not better than most of her male contemporaries. Expectations on this album are a bitch, no pun intended. When you see a title like “Shotgun” you might expect gangsta shit but instead thanks to her charm and a sly sm.arson beat she’s coming with one of the smoothest tracks on the CD:

“Ahh yes, you got me by the libido speedo
Poppin fresh ego, freakin watchin some Tivo
Needle sharin people, people wastin away
Evil wreakin demons, way too achey to pray
Flaky aliens abductin masses of me
Baby heroin is what I happen to be
Smack your head up, noddin back and forth with the cut
Pack up my stable, draggin horses and much
Don’t call me son, my baby’s out of her head
But don’t get me wrong, I laid it out for the feds
I told ’em that I never meant to spit it like this
But I’ve been gettin lifted off my dental frisk
Apprentice to a crazy lady callin her mom
Lack control of my bowels, I’m haulin a john
All along I musn’t chill in this endeavors
But can you ride with me, still please forever?”

“Even on the battlefield I keep it cool
Why panic, it’s tragic the men that evil do
Sip an absinthe cocktail, readin Archie comics
Rubbin shoulders with dimes like “Sugar, aren’t we polished?”
Better late than never, I start to find myself
I find myself affected by each rhyme I tell
I’m an educated fool that knows better, a go-getter
Who don’t sweat some cold weather, so let a
girl grip this mic steel
I bet’cha the world’ll flip quick for my spiel”

Indeed they will. In the time since the original “Bio:Chemistry” Psalm One has linked up with the Rhymesayers crew and is on the verge of even bigger and better things with the highly anticipated release of her next album “The Death of Frequent Flyer.” For now “Bio:Chemistry II” will have to do, a second lesson from a dope MC who already finished college and now wants to teach the rest of us some lessons in how a b-girl does her thang. Don’t front – Psalm One gave up a job as a chemist in a food safety laboratory to mix hip-hop concoctions instead. The music might be more personally rewarding but it doesn’t pay off the college loan bills like a 9 to 5 will. Convince her she didn’t make the wrong choice and don’t be one of those haters who tries to pretend women can’t spit it just as good as the men. 4 out of 5 mediocre MC’s of EITHER gender wish they were as interesting, intelligent, articulate and flat out FUNKY as Psalm One.