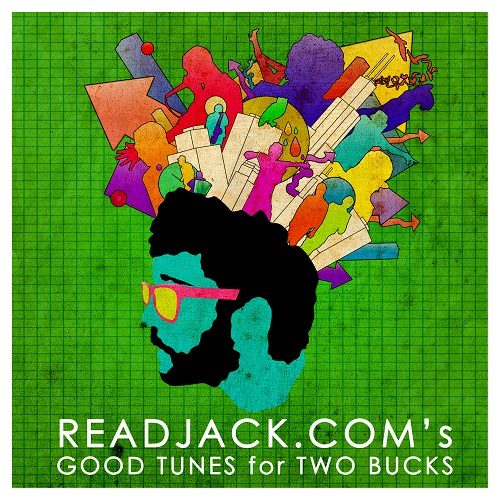 It’s often said that music has the tendency to bring people together. There’s Woodstock, Lollapalooza, Bonnaroo, Paid Dues, Rock The Bells, Bombfest and even SXSW. Well, I’d like to invite you to the “Good Tunes for Two Bucks” festival. Brought to you by ReadJack.com in conjunction with our own Jack M. Silverstein. Need to see corporate sponsorship to make things official? Well, click on one of the banners at the top and bottom of this page (preferably both, and multiple times) and that’ll serve as corporate representation. Usually, there’s some underlying theme in festivals such as this one. In the case of this festival, all of the artists featured are from the Chicago area. Varying genres are represented here as the pendulum swings from hip-hop to rock to electro to blues to funk and even to gypsy jazz. We’re still in a recession, so I’m not even going to try to sell you a bottle of water from twelve bucks and as an added bonus, you don’t have to wait around and nearly piss your pants as you wait around for a vacant portable restroom. Thank me later.

Things get underway with E-Train, whose brief “Get Down” is certain to give the crowd a jolt of energy as the people continue to file in and find their places. Jason Gatz takes the stage next to perform “Whammy” which finds Gatz apologizing to any would-be competitors for being head and shoulders above them all. Head nod-inducing production from The Letter L helps to get the point across. Great Divide hits the stage and two things that immediately stand out are the guitar and the saxophone. There’s also a reggae-inspired break on “Fleetwood” that comes off rather nice. The Nocturnals (comprised of Lucca and our own MC Rota) rock the stage with “Where I Dream To Be, Briefly” and the crowd should enjoy the segments of “Ladies Night” that are masterfully spliced into the song between Rota’s lyrics. The first half of the show concludes with a stellar instrumental track, “Water Music” by jazz funk band, Spare Parts.

The second half of the show opens with Phillip Morris’ smoking (pun intended) exhibition in wordplay, “The MILF Song.” The technological jargon and unrelenting double entendres along with the catchy production, make it damn near irresistible. Mark Verbeck’s “Stranger Here Blues” features him on the slide guitar, strumming away with a tune that reminds me of the theme from “Chappelle’s Show.” It’s almost a lock to elicit some rhythmic clapping from the crowd. Psalm One rocks the audience with the aptly-titled “Quickfire Challenge,” making for a brief but impacting performance with references to peanut butter, “Back to the Future” and even the Street Fighter video game series. A&R’s “Taxi” is some electro-pop goodness that’s probably as far from hip-hop as possible, but it’s just so catchy. It’s all about those nights when you’re just too pissed to drive. FiveSTAR comes off to me almost like a new-age Blue Oyster Cult on “Tinted Glass.” The track also features some vocals from Jai Wil. At this point, those who came exclusively for hip-hop may want to head for the gates. However, those who are open to all types of music (like I know you all are, right?) will want to stick around for tunes from Eyes Manouche and Tell Your Friends. “Djelem Djelem” is an old gypsy anthem, reworked by EM and it even features an accordion. Now who doesn’t love accordions? The show closes out with “Dance If You’re With Us,” a fitting conclusion to this festival that’s had a little bit of something for everyone. Uniting and enjoying some “Good Tunes” is what we’re all about around these parts, and the organizer of this particular festival seems to have achieved that. Perhaps there will be more festivals such as this one to come in the future…only time and maybe a corporate sponsorship will tell. Drive home safely.