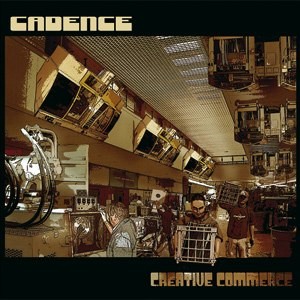 Cadence is one of the most unimpressive MC’s I have ever heard, that impressed the hell out of me. Huh? Can somebody get this kid some sedatives? I’ll elaborate. Cadence is not an MC that will sweep you off your feet right away. He doesn’t possess a menacing growl in his voice that will scare the crows off the scarecrow. He doesn’t do metaphors that will get Aesop Rock hiding beneath the covers. All he does is make rhymes AND beats for himself and put those out into the world to get a little bit of damn respect. Talk about your “Creative Commerce.”

I must admit that I wasn’t into Cadence’s album the first couple of times I listened to it. On the fly, it sounded nice enough, but there are hundreds of records out there that sound ‘nice enough.’ I stuck to skipping some tracks, checking out the ones that sounded dope from the start, but was quickly distracted by all the beautiful ladies passing me by in the subway. The headphones could wait, and so could “Creative Commerce.”

The third and fourth time I listened to this record, without lovely distractions, it started making sense to me what this Massachusetts cat was saying. I had to backtrack my opinion about him the full one-hundred-and eighty degrees asap. What is most enjoyable about the man is his ability to give a surprising twist to a topic that already has been sucked dry like a bowl of lemons at a tequila party.

Take George W. Bush. He is the favourite topic of a considerable amount of hip-hop artists to rally against, but nobody came up with the idea to tell a war tale from the viewpoint of a regular George, who is killed in a conflict his namesake initiated. Without frills, over a solemn clarinet, Cadence sums up in a simple and thorough manner how George’s home situation, and misguided feelings of patriotism led him to an untimely demise in “A Curious Mind”:

“George felt at home in the desert
The desolation made him remember the denigration he had suffered at home
The landscape was different, but the trouble the same
Still he struggled in pain, and in violence he wasn’t alone
And inside he felt changed, but the anger remained
He switched focus, the enemy was in the same boat as he was
He started seeing what the terror reflected
Because he understood feelings hopelessly neglected
The world was complicated when he tried to percept it
And now there wasn’t anger in his heart when you checked it
But his namesake, the one with the W, infected the world with false confidence
The war was expected
But George was in it
Though there wasn’t a way to win it
He tried to make sense of it
Reflect for a minute
But no time to think
In the blink of an eye
With shots behind him
Only took a second to remind him
This wasn’t hypothetical
Hearing screams for medical
Help, George climbed up under a truck to hide
But he knew the voices screaming and it wasn’t mysterious
If there was a way to save them, George was curious
He climbed up on top of the truck
Let off nine shots
But time stopped
George came home in a pine box”

Gripping, to say the least. It would have been fun to insert the whole text, but I believe we have a different website for that sort of thing. It is great to see Cadence move away his viewpoint from the CNN cameras most critics of the war chose to operate from, and he decides to lend his perspective to a person who is directly involved in this conflict. Beauty is in the eye of the beholder, and so is ugliness. It is a shame that he follows through this elegant eye-opener with a furious indictment against the not-so-anonymous George with “W, Pt.2”:

“You don’t command me
To me your plans are in check
Commander in chief?
You don’t even command my respect!”

That lecture goes on for a couple of minutes, but it would have been best if he just stuck with the first song. It’s image is so much more powerful than the umpteenth rant against the Republican politician in charge. Luckily, “W, Pt.2” is one of the few blemishes on a nearly flawless record. The examples of surprising, let’s-rewind-that! compositions form the majority of Cadence’s newest addition to his growing stack of solo projects. In “Word Got Around” himself, Dumi Right of Zimbabwe Legit and micthefinite describe how an innocent MC battle can take on epic proportions with each friend that passes on the story. Cadence starts off the story with a friendly MC showoff, and micthefinite ends the rumour with a wild shooting that ruins a legendary hip-hop show.

Cadence’s lyrics can sometimes give you the feeling you watched the ending of “The Usual Suspects” for the first time, but his beats can be just as surprising. Growing up with the legendary Mike Ladd as a classmate, the veteran MC became a record collector with a predilection for distorted sounds. That dusty love materializes in songs like “Just Me” where he flips the switch on a Motown background choir until they sound like a choir from limbo. He will use the springs of his girlfriend’s old bed on “Drive.” All the sounds on this album sound like they are designed to give off a vintage vigour. Combined with well placed strings and beats, it is apparent that Cadence’s beat making is just as misleading as his vocal accomplishments.

Some rappers need beautiful ladies and lots of huffing and puffing to keep your eyes on the ball. If you give him a chance, Cadence’s hypnotic melodies and heartfelt lyrics will keep you focused without him even breaking a sweat. Mind over matter, indeed.