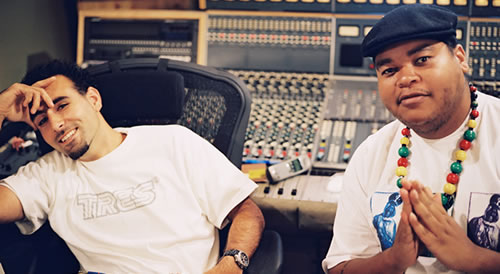 People Under The Stairs Concert Review

Please stay tuned at the end of the concert review for some special comments from Thes One, who sat down for a brief interview after the show. Special thanks to Soren Packer and People Under the Stairs for the invitation, and as always a shout out to Sokol Underground and 1% Productions. The date for this show was May 8th, 2006. Doors opened at 9 PM and there was a very small crowd on hand, although the size of the crowd continued to grow throughout the night up to the point People Under the Stairs went on stage.

Gym Class Heroes were the first to hit the stage. Their lineup consisted of Travis McCoy (Schleprok) on Vocals, Disashi Lumumba-Kasongo on guitar, and Eric Roberts on bass. Actually I believe Eric was the bass player but several Gym Class Heroes sites say that bass player is a man named Ryan, and others say Ryan was the former bassist. Anyway the focus was clearly on Schleprok, who I’m given to understand won an MC battle on Direct Effect. It’s not hard to see why because Schlep is a very energetic performer who easily and naturally interacts with the crowd. The group ran through a set of their best known songs, consisting largely of material from “The Papercut Chronicles.” Tracks I recognize from listening to their CD after the show included “Taxi Driver,” “Pillmatic,” “Make Out Club” and “Kid Nothing vs. The Echo Factor.” They finished their set with the most crossover friendly of all their songs “Cupid’s Chokehold,” which features Schlep singing more than rapping. Naturally all of the girls in Sokol were invited to join them on stage, which made both the band and the rest of us watching in the audience quite happy. The only negative if any was that Schelp accidentally said he was in Boise instead of Omaha, although he caught it and immediately apologized profusely. I understand it can be hard to keep track when you’re on the road for months at a time Schlep, and your call and response more than made up for it.

DJ Mekalek hit the stage next around 10:25 to warm up the crowd on the turntables, then brings out his group Time Machine to rock the crowd. Jaysonic and Comel joined Mekalek on stage. To be honest I knew less about their material than any other act on the bill, but that didn’t stop them from totally rocking the crowd. One of their songs was clearly called “The Spelling Bee” which included lines like “you can’t spell heroin without HERO,” and the crowd clearly got into the cleverness of how they flipped it. Unfortunately it’s best guess on what any of the rest were – one song’s chorus was “cause Mekalek pushed the panic button” and their final song’s hook was “now you’re caught on tape.” It was good overall and the crowd was much larger than GCH’s set, but I’d still say even with a smaller house Heroes rocked the crowd more – maybe just because the crowd knew the Heroes material better.

PsalmOne was the next act to hit the stage, and she was representing for both the crew and her hometown of Chicago. To further the latter she brought out fellow Chicago native LongShot to rap with her, although her charisma and energy was such that she needed no help whatsoever. She clued us in to her real name right away by performing a song with the hook “meet Christalle, she’s a star” and the audience had no argument with it when she was done. Her set consisted largely of material from her unreleased “The Death of Frequent Flyer” CD due out July 18th, but despite not knowing the set the Sokol crowd was rocked solely of the strength of her charisma. She’s as bad-ass as Da Brat but twice as lyrically gifted; in fact she showed her disdain for fellow female MC’s with a song entitled “Rapper Girls (Cut That Shit Out)” signaling with her hands that she’d take out the comp as easily as scissors cut paper. Her Rhymesayers bio swears that “she never stands still” and she in fact did a song to that effect, in which she bragged she rocks “a very heavy flow with a small Tampax” that had the whole crowd going “OOOOOOOH.” Psalm is one bad bitch. She did several songs with LongShot, then closed her set with the songs “Be Cooooool” and “Beat the Drum.” If Psalm One had sweated any harder during her performance it would have been a wet t-shirt contest, nevertheless she was positively glowing off the great response she got and might well have rocked longer if it wasn’t past midnight and there was growing People Under the Stairs anticipation.

Needless to say the crowd was not kept waiting long; while I was at her merch table buying a CD and getting it autographed Thes One and Double K hit the stage and were immediately ready to tear the house down. I have to give the large and in charge Double K double props for pulling double duty, as he was not only rhyming but running the soundsystem and the turntables during their entire set – at times he seemed to be doing all three at once. It should also be noted that he’s just as good on the wheels of steel as he is on the mic so Double K could have a career as a DJ if he wanted, but his heart is clearly in the group. They were eager to perform new material from “StepFather” and quickly got into “Pass the 40,” encouraging the crowd to recite the hook “pass the forty cause my momma ain’t looking” which the many inebriated people (off music, liquor, weed or all of the above) were more than happy to do. I was not at all mad when they decided to freestyle off the old Showbiz & A.G. “Soul Clap” beat, as those unexpected live moments are what make a show great. They also got the crowd to do a live “N-E-B-R-A-S-K-A” chant, which could only sound dope when led by MC’s as energetic as Double K and Thes One. Of course that was followed by a song about where they’re from – “The L.A. Song” – a tribute to what influenced their hip-hop growing up. The crowd had been asking for “Acid Raindrops” all night long and did not dissapoint, although at some point before or after this Thes One put on an afro and said “I’m Rick James bitch!” to a roaring howl of approval. They closed the set out with “San Francisco Knights,” invited Time Machine on stage to remix one of their songs, and then wrapped it up by inviting all the women to dance on stage while they performed “Hang Loose.” It was well after one in the morning when all was said and done and it’s safe to say everybody in attendance went home SPENT.

Thes One had a few minutes to give me some comments afterwards. I asked him if People Under the Stairs were expecting that much energy tonight. “Omaha was a big surprise! We thought it would just be a stopover between Minneapolis and Chicago, but there was a real connection to the crowd and it shows you’ve got a solid hip-hop scene.” In fact Thes pointed out that the West coast is hella jaded, saying they rocked “San Francisco Knights” in San Fran and the crowd just stood there and acted like it was no big deal. “They’re only into who is hot and who is not, and they’re not happy unless they’re frontin.”

What about the difficulty of getting larger tours together that promote acts like theirs? Thes squarely placed the blame on the gangster behavior of large tours in the 1990’s that burned the bridges for so many other groups. He was also very pointed in his critique of the available promotional outlets. “The system is all run off labels and payola. That’s why international tours are our stronghold. Over there you can hear our music on BBC-1 right next to the mainstream stuff. Cats feel hip-hop in London. You can see amazing tours like Juice Crew, Pete Rock, Public Enemy, things that would never happen over here.”

Of course one might wonder why they’d even do US tours after reading that, but according to Thes it’s all about doing business hand to hand at small shows like these. “That’s the only way we sell. Honestly we live off the merchandise on our shows. That’s why when we travel, it’s just me and Double K. There’s no entourage of 20 people like a 50 Cent show. We don’t get the distribution in Best Buy. We get a little distribution thanks to Sony Red and Basement, but not like other groups.” He also had some pointed comments about the lack of new groups in hip-hop today. “Everybody is all about freestyling, making their name off dissing other cats, and not about building a scene. Consequently there’s no radio support. Pharcyde sold a million units of “Bizarre Ride,” imagine if they came out today, it would never happen. It’s just wasting talent. Take all these freestylers and put them in a group with a DJ. Form the links in the chain, we make a chain and link it from the last generation to the next, there’s too many MC’s who are out of context.”

When asked if he had any beef with OM over lack of promotion he said “Nah, we’re happy with OM and We’re not looking for beef. Honestly I’ve given up a little bit on promotion, because we’re real hip-hop and not an angle. We tried to go to Epitaph, Boots told us to come through when we were free, but they wanted to know what our angle was. Uhh, what? We’re hip-hop. That’s not an angle. We just make good music.” Perhaps the most shocking revelation Thes gave me was that URB magazine wanted them to do an interview where they’d diss OM just to get more publicity, and they flat out refused to do it.

Big up to Thes One for keeping it positive, he drove nine hours just to do this show and had to pack up and be ready to roll out again when our interview was over. That’s love for hip-hop, something far too few artists have these days. Please support People Under the Stairs and check out their “StepFather” record at a mom & pop store near you.