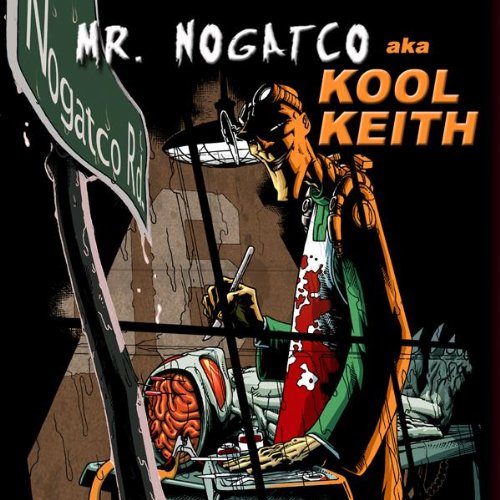 t’s been a long time since a Kool Keith album really got me excited. Sure, Keith has kept up a steady output of material since the late 90s and albums like “Diesel Truckers” and “Thee Undatakerz” have had their moments, but the last time I was really looking out for a Kool Keith CD was when the “Pimp to Eat” project dropped. I said all that to say this â€“ “Nogatco Rd.” caught my attention – so much so that I even pre-ordered the joint on Sandbox Automatic and not just because they threw in a free copy of the “Matthew” album. The cool artwork and promise of a “Nogatco Rd.” movie included on the enhanced CD were good indicators that maybe Kool Keith had put a little more energy into this CD than he usually does. My instinct was right as the “Nogatco Rd.” project is Keith’s best in years. For those who haven’t caught on yet, “Nogatco Rd.” is “Dr. Octagon” spelled backwards and is also the street where Kool Keith’s latest alter-ego Mr. Nogatco resides. Mr. Nogatco is a special government operative who is hired to infiltrate alien crash sites and retrieve subjects to be studied. Of course, Keith would never be happy just playing some government crony and Mr. Nogatco’s true intentions are to use his position to do his own research and one day unleash an army of aliens under his control on the unsuspecting earthlings.

As with all Kool Keith albums, the intent isn’t always entirely clear without some background info. Included with the CD is an enhanced portion that can be accessed with your computer. The main draw is a 12 minute “Nogatco Rd.” mini movie that is essentially a collection of 3 music videos for songs included on the CD. The movie is comprised of grainy black and white footage taken from what looks to be old sci-fi movies and mixed in with material featuring Keith and producer Iz-Real. Not only is the movie something you don’t see everyday, it serves to highlight just how great the production is on the album and how much it fits the concept. On top of the movie you also get a digital comic book that, albeit short, explains the concept of the album pretty well.

Iz-Real is credited as the producer on this project and it is clear that without him this album might have ended up as another misguided release from Kool Keith. Iz-Real is a producer in the traditional sense of the word, meaning he does not make the beats but chooses them and plays the lead role in organizing everything from the movie to the recording process. Iz-Real’s importance is apparent when you take the project as a whole and realize he also directed the movie that’s included. The beats are provided from the likes of DiViNCi, Mr. Hill, Carl Kavorkian, and others who all come up with quirky space age beats that fit the theme of the album perfectly. Aside from having out of this world names, tracks like “Bionic Fuse,” “Night Flyer (Force Field),” and “Alpha Omega (The Beginning)” all have high-tech beats complete with extra-terrestrial sound effects that set the mood nicely. Iz-Real definitely does his job as producer well by compiling a collection of beats that are the perfect background music for Kool Keith’s alien conspiracy.

Kool Keith comes through in top form dropping verse after verse of dope lines weaving between alien diatribes and comments on the “real” world. He’s almost on the level of the first “Dr. Octagon” CD as he avoids being too abstract with his rhymes. Being a concept album it is difficult and unfair to point specific tracks to peep. The ones that might be appreciated on their own include “Live Dissection,” a dope track featuring Sage Francis, Sole, and Kool Keith. While they try their best, Sole and Sage Francis don’t even come close to matching Keith’s alien-inspired battle raps. “Alpha and Omega” is the closest Keith comes to putting together a conventional track as he tells his life story only like he can:

“As a child growing up
Collecting marbles and roaches
Little insects was my pets
Lightning bugs under my sneakers
Scraped from the concrete
The green streaks light up the rugs
The mouse collector â€“ with big blo bubblegum
Y’all remember Jolly Ranchers, apple green
Mouth with a thousand Bazookas
Brown bags with lemon-heads and Bubble Yum
Kids walking up the street â€“ sour pickles
Look at the kids â€“ Strange
My mom would go to school, PTA meetings,
Teachers quote â€“ “He’s strange”
He’s very spacy, he’s a wizard kid
Incredible, with a Captain Kirk and Spock shirt
He’s out of range…”

The rest of the album is equally dope, blending sci-fi samples with Iz-Real’s chosen beats and Kool Keith’s fresh verses.

“Nogatco Rd.” is an experience I’d recommend to all Kool Keith fans. When I say experience, I really mean a full experience as Mr. Nogatco delivers more than just a simple CD full of music. If Kool Keith keeps hooking up with focused individuals like Iz-Real then the results are sure to be dope. As is the case with every Kool Keith CD, conventional rap fans beware. While true rap fans can appreciate rap from all hoods and planets, those who strictly listen to rap to shake their ass or lean their shoulders probably won’t be able to comprehend the genius behind Kool Keith’s vision.