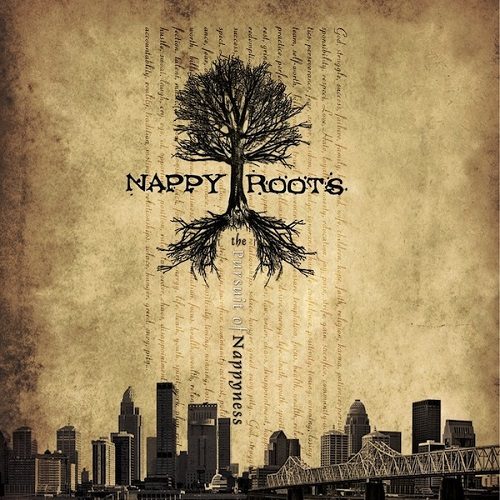 Nappy Roots emerged in the wake of OutKast’s “Stankonia,” one of many groups from below the Mason-Dixon signed to a major label for their embrace of a more wholesome southern sound in favor of the by then stale bling-bling rap from New Orleans. Even among a multitude of acts that rode the Dirty South wave to success in the early 2000s, the Kentucky sextet stood out for their country-fried sound, down-home musicality, and portrayal of poor yet cozy small-town life in the Appalachian states, an Americana distinct even from their regional contemporaries. While attuned to the abject poverty of their peers, their verses did not depict ghetto fantasies, but rather the lifestyles of poor folks far removed from city life. Country and darn proud of it, their happy-go-lucky tales and unmistakable drawls endeared fans across the map for their inspirational, optimistic, humble, charming, and soulful qualities, accompanied by irresistibly catchy music often incorporating such provincial elements as banjos and harmonicas. In 2002 they scaled the charts on the strength of the infectiously funky “Awnaw” and lovably twangy “Po’ Folks” featuring Anthony Hamilton, singles from their tellingly-titled national debut “Watermelon, Chicken & Gritz,” a winner of an LP that they managed to surpass with the follow-up “Wooden Leather” a year later. However, despite their rapid ascension to fame, years passed in silence until they reemerged as a quintet sans member R. Prophet with a mixtape in 2007, followed by 2008’s “The Humdinger.” 2010’s “The Pursuit of Nappyness” is their second album to be released on their own Nappy Roots Entertainment Group.

While no longer a chart-topping entity, Nappy Roots continues to provide the kind of hearty Kentucky funk that made them famous, yet they’ve matured in the process. Over bright piano and xylophone-based production by Cloud9, the verses of the strong opener “Welcome to the Show” advocate persistence and prayer, but eventually border on self-parody as a dramatized fan tells them, “Dude, you guys are phenomenal dude. I promise, I mean, my sister loves you guys. I joined this frat because of you guys! Fuckin’ awesome, man. Nappy fuckin’ Rootsâ€¦” This track finds the boys in top form, exuding encouraging and uplifting sentiments, yet also humorously acknowledging their recent gigs touring frat houses at southern universities. For the most part, “The Pursuit of Nappyness” is business as usual on the mic, finding the MCs extolling their lifestyle with charming flair and humility, such as on “The People,” an emotional dedication to loved ones, and “All 4 You,” a heartfelt thanks to listeners. Although their style is by now familiar, verses such as B. Stille’s on “Be Alright” are nonetheless inspiring:

“I’m filled with mirth, and I’m smilin’
Find me in the church on Mount Zion
I used to think I was cursed like ‘The Shining’
A lot of folks is worse off than I am
I’m truly blessed no denyin’
They say do your best, and I’m tryin’
But sometimes your best just ain’t good enough
You get yourself in a mess, but things lookin’ up
So before they break us
We’re gonna make it like forty acres
People do anything for this paper
Get a shape up with a sporty taper
Just so you can look fresher than your next door neighbor
Make yourself seem major, impress those strangers
Found Christ, now I got a new lease on life
You can hate all you like, I’ma be alright”

The most marked change in the group since their early-2000s commercial heyday is that, their days at Atlantic behind them, they have been forced to adopt their celebrated “ballin’ on a budget” mantra for their music as well. Where “Wooden Leather” featured production by such familiar names as David Banner, Mike City, Raphael Saadiq, Kanye West, Mr. DJ, and Lil Jon, “The Pursuit of Nappyness” features unknown producers. The results are largely impressive. Phivestarr’s club-ready “Fishbowl” doesn’t even feel slightly forced, and their “Infield,” a celebration of recreational drinking, sounds like it came from the same session as “Awnaw.” Chops comes through on the horn-heavy manifesto “How I Do” and “Know Bout Me,” an organ-based number tinged with a mean electric guitar.

“The Pursuit of Nappyness” features two absolute gems that stand among the group’s best material, both produced by Phivestarr, the Atlanta duo of DJ KO and J Fresh. On “Ride,” all five MCs rap about the eternal chase to satisfy unfulfilled dreams over a gloomy yet hopeful-sounding beat outfitted with an upbeat drum clap pattern. “Back Home” sounds tailored for the campfire, a sentimental assertion that home is always waiting and that “these are the good old days.” The rallying hook goes:

Both sound exactly how a Nappy Roots song should: nostalgic, elevating, and soulful with big, catchy hooks and gloriously twangy backwoods instrumentals. Phivestarr proves to have mastered the quintet’s sound once more on “Winner Take All” with a smooth chord progression and jagged guitar arrangement.

Now a decade deep, Nappy Roots can look back at magnificent yet eluding stardom, inner turmoil, and label drama, not to mention four excellent albums and putting Kentucky on the hip hop map. “The Pursuit of Nappyness” is a rare triumph that could only come from such an experienced group, one which despite disappointments is thankful for everything they do have and emphasizes that life is still good. Yet in many aspects, the more things change, the more things stay the same for Nappy Roots. While not every track is on par with the standouts, “The Pursuit of Nappyness” is a consistently dope listen as the quintet once again proves expressive and charismatic. Still centered around the gruff Big V, whose delivery is half Baptist preacher, and the drawly Skinny DeVille, whose delivery is half young Andre 3000, their fourth LP has their signature charm in abundance as they strive to stay up to date with fresh production. One of the best albums of 2010’s first half, “The Pursuit of Nappyness” is further inspired, whimsical Kentucky-fried hip hop from one of the most darn likable groups in rap.