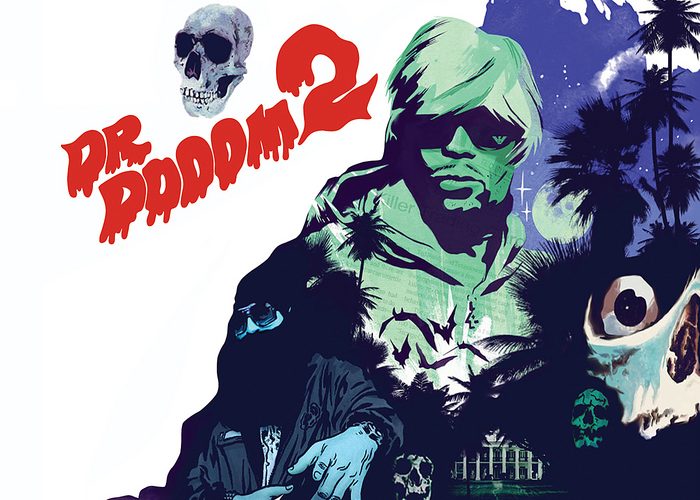 New Keith Thornton releases come with little to no warning. One day you’re thinking you haven’t heard anything from that crazy motherfucker in a minute, the next he’s got two to three new projects all available at once. New Keith Thornton releases also come with little to no rhyme or reason. A hip-hop legend like Kool Keith/Rhythm X/Dr. Octagon doesn’t need to explain himself to anybody, but it stands to reason he couldn’t do so even if he tried. It’s been argued that his ever-changing and seemingly mentally unbalanced approach to hip-hop is a gimmick to sell records, and yet there are two fallacies to this line of thinking. The first problem is that it’s not a very marketable gimmick, as even Keith’s best produced and/ormost successful albums do not move huge units. Keith has a very devoted cult following and gets praise from the right people as an artist, but try finding a single Keith song you can play on radio or MTV when he talks about perverted sex with zoo animals or pretends to be a doctor performing unnecessary anal surgery. Keith wouldn’t have it any other way, and that’s the second problem with the idea that his insane rap career is one big gimmick – HE LIVES THE GIMMICK. That’s not to say he does all the things he raps about (except for photographing nude models – that I can picture), but simply that he’s gotten so used to saying and doing whatever he wants and still getting paid for it that he lives life with no filters whatsoever. That’s precisely what makes him so fascinating and yet so perplexing as an artist. Whenever Keith has an idea, no matter how crazy it is, he’ll just go ahead and do it knowing somebody somewhere will buy it. It’s unfortunate that they’re not all good ideas but if you’re a fan of Keith Thornton’s you learn to live with it.

“Dr. Dooom” was one of Keith’s more ingenious and well-received ideas, conceived as a response to the fact his Dr. Octagon persona had become a room with no doors and no windows he couldn’t escape from. The only way to escape this persona prison was to create an even more bugged persona and have him “kill” Dr. Octagon. Thus liberated Keith could never be forced by some over-enthusiastic record label executive to create a more marketable “sequel” to Dr. Octagon – he could simply proclaim Dr. Octagon to be dead both figuratively and literally. As ingenious as this plan (and the album hatched from it) was, it didn’t stop several attempts to resurrect Dr. Octagon from the grave in order to cash in… including at least one from Keith himself. Without openly admitting it as such it was pretty clear from reversing the title to “Nogatco Rd.” what Keith had in mind. Much less clear is whether or not Keith really approved of “The Return of Dr. Octagon” or not. It seems that either way Keith has been unable to shake that zombie ever since it came back to life, so it became time for Dr. Dooom to return and slay his nemesis again. Just remember Keith, you have to destroy the head. Dr. Octagon will rise from the grave again unless you take the head completely off. No doubt he’s figured that out judging by the macabreR.I.P. Dr. Octagon hailing the release of “Dr. Dooom 2.” The video is more gruesome than the audio, a rarity for Mr. Thornton, and yet much like a campy horror flick it’s not hard to watch because it’s so far over the top. Keith flows and the blood flows and the pain of being tormented by Dr. Octagon’s evil is made abundantly clear:

“This is a true story; how I put the clamp on Octagon
Drowned him in the water until he was gone
Then he came back alive
I stabbed him over 17 times
But you people out there wouldn’t let him die
Y’all put him on the respirator
The critics that gave him mouth to mouth resuscitation was a hater
Dreamworks signed him to a major
Tony Isobel and Dan wanted to adopt him from the hospital
Again! Two weeks later, Dr. Octagon was dead
Electrocuted by electric razor
Octagon is GONE, this image was pawned
Every now and then I go visit him in the cemetery, on and on”

Thanks to production from long time friend and collaborator KutMasta Kurt, “R.I.P. Dr. Octagon” achieves their mutual goal of killing off “whack remixes and duplicated copies.” Heavy piano keys, a funky womping bassline, and a very focused and coherent Keith flow make this a fine return for Mr. Thornton’s alter ego Dooom. You have to believe Keith is shooting from the hip when he says “they got excited every time something that was created in three days would drop,” indicating that he never intended for Octagon to take on a life of his own or overshadow his long and prolific hip-hop career. It’s only fitting to note that Keith may at some point need another of his alter egos to kill off Dr. Dooom, as it will be hard for Keith to shake off the popularity of “Dr. Dooom 2” among his diehard fans, a curse of KutMasta Kurt handling almost all of the production duties on this CD. The lone exception is “The God of Rap” produced by TomC3, although the liner notes have a credit labelled “additionally” that is at first cryptic. It’s only when one realizes the same three songs with “additionally” credits are the same three that feature guest rappers does it become clear they are PUBLISHING credits, making sure heads like Motion Man get their royalties for “Surgery.” Motion Man has always been hit or miss for me, but it hardly matters since Keith’s on point on the song anyway – well, as on point as he CAN be:

“You wanna face up, move out, get position
Trunk jewelry is heavy competition
Your girl move with them thongs in the kitchen
When I talk to the hawk, fly to the mission
The president move, everybody listen
to Scott LaRock, Red Bull like Pippen
The verse stopper with words turnin over flippin
You in the wheelchair, boppin like Sam cripplin”

It’s counter-productive to analyze Keith’s verses too carefully, because at some point they’re just well constructed and well delivered jabberwocky. Scrutiny defies the very purpose for which these songs were conceived. At times you may think you can discern a point to tracks like “The Countdown,” particularly when Kurt provides an epic musical backdrop sounding like a cross between comic books and Godzilla movies, but when Keith’s flowing just go with it. He can switch from talking about himself in the first or third person at the drop of a dime, reference NBA players for no reason, then talk about decorating aquariums and making calls on “duck phones” before noting that an elephant landed on his bed. What? Exactly. With Keith Thornton it sometimes matters more HOW he’s saying something than WHAT he is saying. Thankfully on “Dr. Dooom 2” the how factor is working. His diction and breath control are as close to a traditional rap as Keith ever gets, making even total nonsense comprehensible.

Standout tracks include the spooky “I’m Creepin’,” slow-flowing funkdafied “I Followed You,” intense Ultramagnetic style “Step N Fetchers” (which makes a “Bamboozled” point in a very esoteric way) and a classically Dooom track called “That Girl Is a Monster” which could have been leftover from the first edition. It’s a shame TomC3 only did one track, but his symphonic work on “The God of Rap” gives Keith a chance to expound on one of his favorite subjects – how monotonous other rappers are. Perhaps it’s slightly unfair to note that Keith can himself be monotonous when he dwells on how monotonous everyone else is, but then again it’s worth saying because at least on “Dr. Dooom 2” he doesn’t OBSESS on how whack everything is other than him – he just mentions it in passing now and then. If you’ve been waiting for Keith to make a strong comeback, “Dr. Doom 2” is the album and the death of Dr. Octagon (again) was the reason.