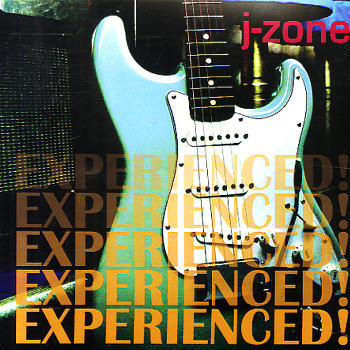 As a mid-80s baby, I can honestly say my music knowledge is still at a young, dare I say infant, stage. I just started getting into music in sixth grade, so I’ve really only been following music for eleven years. Of those, only the last eight can I truly say I’ve been immersed in the culture. So to say I’m the most competent person to review this ambitious J-Zone side project would be a stretch.

J-Zone, whose skills behind the boards have been just as lauded as his skills behind the mic, pays tribute to a legend way beyond his time with “Experienced”: Jimi Hendrix. As I mentioned, I embarrassingly have limited knowledge of Hendrix’s body of work and I wish I could give a much more comprehensive analysis of J-Zone’s interpretations of Hendrix’s orignals. But what I can do is give an honest opinion about how this project stands on its own.

“Experienced” is essentially an instrumental album where J-Zone samples, rearranges, and loops Hendrix riffs into a hip-hop-ish pattern, similar to what Danger Mouse did to the Beatles’ “White Album” for the much-discussed Jay-Z remix “The Grey Album.” And much like that album, “Experienced” is impressive considering the circumstances.

Standouts include “Hit N Run,” “Pimp Palace Magic,” and the aptly-titled “Funky Child.” “Funky Child” is gonna be one of those “hate it or love it” songs for listeners. Some will object to the shortened sample and complain that J-Zone copped out and took over with his own production. Others will argue that good music is good music, who cares if he steps outside the integrity of the project a hair? Me? I say it’s one of the most ridiculous instrumentals I’ve ever heard. Just how funky is “Funky Child”? Funky enough to repeat again and again. And again. I’m telling you, any DJ could electrify a crowd with this joint alone.

On the downside, I’ve always hated when artists pretend to have conversations with other artists by splicing together soundbites. The idea of “Experienced” is that it’s a jam session consisting of J-Zone and Hendrix. So Zone pretends to chit-chat with the legendary guitarist by cutting-and-pasting various mumbles and ramblings Hendrix had recorded. I like the thought, it just never works out. That brings me to the other downside: “Crazy Mary.” Again, I sort of see where J-Zone was trying to go with this, but it just sounds completely disjointed. Lastly, with a running time of under twenty minutes, it’s over before it begins. In one car ride, it played in its entirety twice. One way. But this really isn’t a complaint, I’m sure twenty minutes was stretching it to still end up with a quality product. Gotta respect Zone for that. No filler. Even “Crazy Mary,” though I didn’t like it, was a worthy effort, obviously not a throw-in.

I’d be interested to see what Hendrix fans think of this. Whenever a project like this is done, it results in strong reactions. But as you listen to “Experienced,” it’s obvious that J-Zone genuinely cares about honoring the legend who he happens to be a fan of. It’s much easier to accept a reinterpretation when it’s done by a fellow fan, especially a fan as talented as J-Zone.