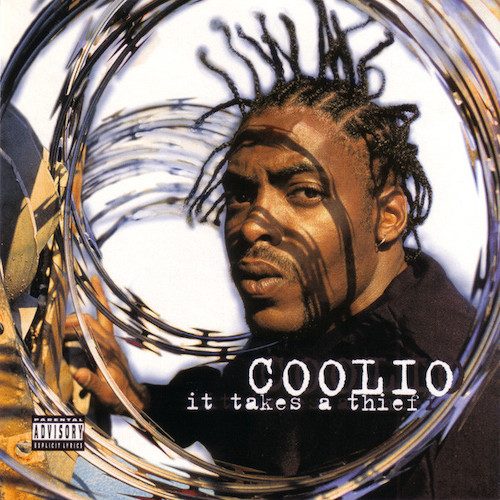 It Takes a Thief

Coolio :: It Takes a Thief

In the interconnected world of California rap music from the late 1980’s through the mid 1990’s the line of succession goes a little something like this: N.W.A records beget me buying Ice Cube records, which beget me buying WC and the MAAD Circle records, which beget me buying Coolio records. There are a whole bunch of ancillary artists I didn’t mention in that timeline — KAM, Threat, Da Lench Mob, King Tee and so on — but when I reverse trace Coolio’s “It Takes a Thief” back to how I discovered him, it was through MAAD Circle’s “Ain’t a Damn Thang Changed.” How did I discover W.C. though? Ice Cube’s “Death Certificate.” You get the idea.

I was already primed to like Coolio as a solo artist thanks to prior experience, but to my surprise looking back “Fantastic Voyage” was NOT the first single. I think my memory got skewed thanks to the fact despite it being the THIRD single off the album, it went super viral like coronavirus and became inescapable anywhere you went. Pop radio played it. MTV played it. BET played it. Your parents and grandparents played it. Why did it achieve such massive success? Let’s be frank about it — the song is built almost entirely off of Lakeside’s song of the same name. There’s sampling and then there’s straight up carjacking, and Coolio took the keys to the song and drove away. I’m sure they got paid royalty points. It’s that obvious. He still made it his own with some relatable verses about his own struggles.

“I’m tryin to find a place where I can live my life and
maybe eat some steak with my beans and rice, a
place where my kids can play outside
without livin in fear of a driveby
And even if I get away from them driveby killers
I still got to worry bout those snitch-ass niggaz
I keep on searchin, and I keep on lookin
But niggaz are the same from Watts to Brooklyn”

The monster success of the track made Coolio a household name, and in no small part led to him writing the Grammy award winning song “Gangsta’s Paradise” — first as the lead single for the Dangerous Minds motion picture soundtrack, later to be featured on his album of the same name. It got to the point I remember seeing Coolio featured on the game show Hollywood Squares, and people referring to his unique twists as “Coolio hair.” He may have started out as just another hard hitting, truth to power speaking West coast emcee, but he transcended to cultural icon in no time flat to a degree that overshadowed “It Takes a Thief” almost entirely.

Like “Fantastic Voyage” after it, “I Remember” owes a large part of its sound to one particular source — Al Green’s “Tomorrow’s Dream.” Having good taste in samples certainly led to good singles, but it’s also cool to see J-Ro of Tha Alkaholiks on the track. Remember earlier when I said the West coast was highly interconnected in those days? N.W.A. led to Cube, Cube led to King Tee, King Tee led to Tha Liks, and that’s how the story goes. You can’t trip over an album back then without seeing how everybody is tied in. True to those roots Coolio’s homey W.C. appears on the song “U Know Hoo!” It was never featured as a single though — it’s probably a little too rough around the edges for a radio edit.

What’s surprising about “It Takes a Thief” compared to a modern spinoff album is how much of the nearly hour long presentation is Coolio on his own. Other than the previously mentioned cameos, the only other guest appearance on the album is LeShaun on the album’s final single “Mama, I’m in Love Wit a Gangsta.” It’s an ode to holding it down when your significant other ends up doing a prison bid, while said same is stressing behind bars that the relationship is going to fall apart. LeShaun probably doesn’t help matters by saying “a bitch can’t even trip like she doesn’t need a friend.” Coolio’s rebuttal is MUCH stronger on the unedited version of the song.

The rest of the time Coolio is rolling for delf, figuratively or literally on travel jams like “On My Way to Harlem” and “Bring Back Somethin’ fo Da Hood.” One of my favorite jams has always been “Can-O-Corn” and once again it’s a song built entirely off a previously dope track — Rufus & Chaka Khan’s “Everlasting Love.” If you want to knock the hustle because Dobbs the Wino wasn’t more creative be my guest, but I still think Coolio took that sample and personalized it with a gritty tale about the depths of poverty.

“Not everybody can relate to what I been through
Even though some front and they try to pretend to
Know about the life of a kid and the strife
Where he has to live in the shadow of a base pipe
Good goes to bad, bad goes to worse
And pretty soon, he’s stealing from his own momma’s purse
So clean out your ears and open up your eyes
I reach out to touch, but somebody moved the sky
My stomach is growling, word is born
cause all I had for dinner was a can of corn”

As much as I’d like to tell you “It Takes a Thief” was a flawless solo debut for Coolio, that would be a gross exaggeration of the truth. The tendency toward overly obvious sampling reaches the peak of absurdity on “Thought You Knew” with the unapologetic “Hobo Scratch” jack, and the track isn’t even contemporaneous with its peers. Coolio sounds about four years younger on the verses, suggesting it might have been left over from MAAD Circle recording sessions as opposed to new material. Dobbs flipped things a little more creatively for “Hand on My Nutsac” with White Heat and Lafayette Afro Rock Band, but the high pitched notes just wind up feeling like nails on a blackboard after a while.

Take as a whole though “It Takes a Thief” delivered above and beyond the expectations that I had as a WC and the MAAD Circle fan, and the resounding success of “Fantastic Voyage” did even moreso for Coolio. Although he’s had a prodigious career with ten studio albums in total as a soloist, you don’t hear Artis Ivey Jr. being mentioned these days unless someone is nostalgic for Kenan & Kel (he did the theme song). Perhaps that needs to change starting now.