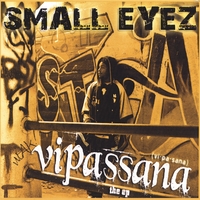 Album intros are often wasted one way or another, so any intro that tells me that it needs me “to believe, see the forest for the trees, envision the seeds, acknowledge the leaves” and concludes with a pearl of wisdom like “Choice is the mother of freedom / gain control of your soul and it starts breathin'” scores plenty of brownie points where other albums already make me reach for the fast forward button.

Small Eyez is a young man in his early twenties representing the State of Ohio, specifically the City of Dayton and his birthplace Cincinnati. He currently operates out of Atlanta, where he strives for higher education at Morehouse College. Interestingly, the student derives the title of his recording debut “Vipassana” not from the Western world but from India, where vipassana denotes an ancient mediation technique and translates to ‘insight’ or ‘to see things as they really are.’ It’s a fitting title for a CD that perpetually urges you to take a good look. Small Eyez acts as the narrator and interpreter of his environment, detailing how we all fall victim to the dream-chasing inspired by the entertainment industry on “Holly-Wood (Tryna Get Big),” reflecting on aspects of the visual sense on “Blink,” or directing your attention to the “war goin’ on outside” (“…it’s not Iraq, it’s not suicide bombers / they killin’ us through the crack, smugglin’ guns through government funds”) on “Look Around You.”

Small Eyez would only be half the artist he is if he didn’t require the listener to pay acute attention. I for one have trouble decoding the ‘hidden message’ he keeps referring to on the song of the same name. But I guess I wouldn’t be completely wrong if I said that Small attempts to revive the messages of Martin and Malcolm (whom he both mentions). If any categorization is needed, Small Eyez can be labelled a conscious rapper, and if any references are needed, sometimes he flexes a youthful vigor reminiscent of Poor Righteous Teachers lead rapper Wise Intelligent (“Hidden Message”), sometimes he channels the passionate lamenting of Rhymesayer Brother Ali (“Blink”), and sometimes he goes for the confessional intimacy of Kanye West (“Look Around You”).

Displaying virtually none of the nihilism many of his peers opt for, Small Eyez is thoroughly good-natured (“Put my foot in it? Nah, I put my heart in it”), yet he’s still keenly aware of the obstacles many people face. Personally, however, he must have come across something that renders him optimistic. Freedom is the term he chooses himself, relating in “Past, Present & Future” that he found freedom in life and that this liberty is expressed in each and every one of his words. Elsewhere he dubs his entire body of work “freedom music,” and voices his intent to “feed the people through it.”

The beats on “Vipassana” fit this attitude like a glove. Supported by a cast of aspiring producers, the CD takes a very soulful approach to hip-hop. The soul just keeps pouring out of the speakers, often in the form of highly melodical samples combined with drums that sound rawer and whose arrangements are more complex than what today’s listeners are used to. With “Hidden Message” Ms. Cooley concocts a beat that would be at home on a Little Brother album, KNetik conducts the upbeat, uptempo posse track “Earth Wind & Fire,” SaiClops parallels Small’s journey to Africa and into his people’s past on “Afrikan Roots,” while A-BOTS are the main responsibles for the album’s smooth structure. A highlight they contribute to substantially is “So Special,” a song sketching the beginning of a love story so subtly most confessions of ‘thug luv’ you hear these days will appear even clumsier.

If “Vipassana” wasn’t such a small-scale release and radio wasn’t so thoroughly commercialized, I’d urge everybody to call their radio stations and request this song immediately. Then again, when the album title’s encouragement to call it like you see it is to be taken serious, there’s no denying the fact that Small Eyez still has a couple of steps to perfection ahead of him. At this point, the beats and raps are not yet compact enough, everything needs to come closer together to form a truly convincing whole (post-production is also suggested). As a human being, Small Eyez may already be wise beyond his years, but as an artist, he’ll be able to mature a great deal.

Nevertheless, any rapper that realizes that “failure is a blessing” should get a particularly warm welcome in today’s cold corparate climate. Since we started with the intro, it’s only right to end this with the outro, which consists of extensive shout-outs. It is rare for a rapper to show gratitude to everybody who contributed to his CD, but Small Eyez is such a rare artist.