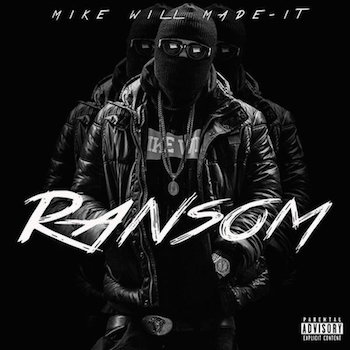 Mike Will Made It :: Ransom

There’s been a fear in hip-hop circles for decades that white people’s enjoyment of rap music would lead to us co-opting it in the same way we co-opted rock music and jazz. The success of Macklemore and Ryan Lewis in 2013 led many to fear that rap was about to be taken over by white hipsters. Instead, 2014 saw the rise of young producers and rappers of color having huge hits with what were basically street rap songs. One of the most prominent producers of this movement is Atlanta producer Michael Williams II, better known as Mike Will Made It. Since 2011, he’s produced hits for everyone from Wacka Flocka Flame to Rihanna to Miley Cyrus.

Mike’s latest mixtape, “Ransom,” gives twenty examples of the good and bad of rap in the twenty-teens. Number one in the bad column is the fact that this is a mixtape instead of his long-promised debut album. Mike’s been signed to Interscope since 2013, and has been talking about putting his debut since then. It’s not clear if the delay is due to the label or Mike getting sidetracked producing albums for Kanye, Lil Wayne and Fergie, but either way it falls into an all-too familiar trend of major label rap albums being delayed or shelved for months if not years. Given how quickly trends in hip-hop change, it seems like it would be the last genre where you’d want to delay a project, but it happens all the time.

On a more positive tip, Mike Will Made It deserves credit for making hip-hop that speaks to the streets while also managing to appeal to people who have no idea where Bankhead, the Ninth Ward, Queensbridge or Hunter’s Point are. His music maintains a lot of the spirit of late 90s and early 2000s Southern street rap, but with a modern edge. Thundering 808s, clattering hi-hats, snapping snares are all over his beats, often with some icy synths or tinkling keyboards to add a hint of melody. There are elements of ambient, trance, and chillwave in his use of synthesizers. Most of his beats juxtapose these softer, melodic elements with booming bass. It’s a combination that works, which is probably why everyone from Zaytoven to DJ Mustard is doing it. Mike does it most effectively on “Drinks on Us,” featuring Swae Lee and Future. The bass is cavernous, and the sweet spaciness of the sung hook is contrasted by the ratchet lyrics.

Those ratchet lyrics are another hallmark of twenty-teen hip-hop, and can be considered good or bad depending on your perspective and personal taste. I appreciate the youthful exuberance and, uh, directness of the lyrics on “Ransom,” but there’s a lack of substance to them. Big Sean sets the tone on the intro:

That’s some poetry right there. I’m sure Ariana is proud. So much of “Ransom” keeps it raunchy and shallow, never getting beyond bitches and money. That’s a shame, because a lot of these rappers actually have something to say if given half the chance. Later in the introduction, Big Sean says:

“Bitch you think this life landed on me?
My whole city look like it’s abandoned, homie
And we came straight out of those abandoned homes
Every wish we ever had got granted, homie
And I never take that shit for granted
Even when my marble floors and countertops are granite”

Those moments of insight are few and far between. Jace steps things up by being as funny as he is foul on “Fuck U Expect,” ILoveMakonnen’s drugged out “Swerve” is another highlight, and Dej Loaf’s verse on “Possible” elevates that track. The Future/Lil Wayne/Kendrick Lamar collabo “Buy the World” is underwhelming, and Juicy J’s “Don’t Trust” is yet another retread of “Bandz a Make Her Dance.” The tape ends with Nicki Miniaj’s surprisingly vulnerable “I Lied,” off “The Pinkprint.”

I love that producers like Mike Will Made It are combining trap music and EDM, and I love that the rappers he works sing their verses and add a musicality to their rapping. I wish that there was more to Mike’s sonic pallette than 808s and trancey synths, and more to the lyrical content of “Ransom” than the usual sex drugs and money.

Mike Will Made It :: Ransom
6Overall Score
Music7
Lyrics5