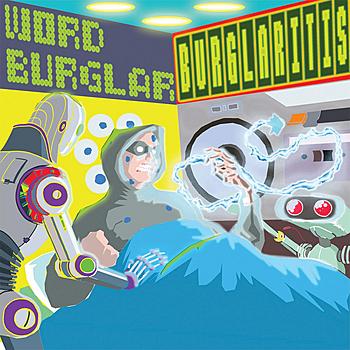 It’s 2006, and the proud-to-be-underground, punch-line-flipping, middle-finger to the mainstream routine is staler than ever before. How ironic it is, that the same cats who’ve ostracized all things-cliched, from bling-rap to thug music and all in-between, have not only become the butt of their own joke, but also the most recognizable and predictable of any such group. Anyone sick of 50 minutes of “sicker-than” raps is probably on the same page, and if you’re one of those people who can’t quite stand an entire LP’s worth of similes, you know and comprehend all the types of frustration at hand.

Fortunately enough with Halifax emcee SJ the Wordburglar, the approach is at least lighthearted enough to avoid stagnancy. He’s a joker at heart, can flip a decent punch line when he feels like it, and is backed by a sizeable load of good beats from a talented group of producers. Still, it would not be so unfair to label SJ a one-trick pony, as his latest LP Burglaritis is built around his ability or inability to keep listeners interested with gags and punch lines.

You can’t dismiss him for what he is, though, and that’s a dude who really don’t give a fuck WHAT you think about him. Listeners might be tempted to clump him into the same group of nerdcore rappers that Paul Barman and mc chris equate with, and a lot of the time he sounds just like them. Quite frankly, he’s a dork, and if one thing’s for damn sure, he doesn’t say much in an effort to prove himself to any particular audience. It isn’t often you hear rappers reminiscing of their childhood paper routes, and I can’t recall the last time an emcee name-dropped Topanga in a rap, much less Dr. Mario or Gilbert Godfrey.

In that respect, SJ demands some approval, but his audacity doesn’t necessarily make up for his raps, which generally consist of a lot of the same shit over and over again. Although nearly every track is intentionally funny, its as though Wordburglar feels that being silly is an adequate excuse for dropping wack rhymes. Case in point is the track “Layman’s Terms,” where ya boy actually fills two minutes and forty-two seconds of vinyl with lines like, “I’m a winner like someone who always wins,” and “I keep getting bitten like bites.” And that’s the whole song. It’s like a Blackalicious concept gone to hell, chewed up and spat back out again by Beelzebub himself, and it doesn’t stop there. Making a bid for an even wacker concept than that is “Rhymes With I’m,” where SJ turns what would have just been another annoying song into an annoying gimmick, where he indeed does yack out a bunch of “I’m this” rhymes.

It ain’t all bad, though, especially when Wordburglar sticks to his guns. Even at his best, he lacks the charm of a Paul Barman, but its hard not to smile after a line like “act like you know like that woman who played the Oracle.” Such raps are all the better with good beats behind them, and there’s no such shortage. Producers Jorun Bombay, Uncle Fes, Fresh Kils, and Beatmason rarely falter on Burglaritis, with consistently hard hitting kicks, sharp snares, and great loops. Bombay wins you over on “Buttafly,” and is the star on “Cream of Wheat,” while Beatmason hooks Wordburglar up with eleven nice backdrops.

In a strange way, SJ the Wordburglar is too wacky to be written off, but far too redundant to really be taken seriously. In a nutshell, Burglaritis is your standard underground longplayer, complete with the autobiographical rap, the posse cut, the occasional “peace to the heads,” and a cornucopia of average punch lines, all concealed under a goofy facade. “I stayed focused, stayed away from the mainstream,” SJ says. Its such an incredibly played out notion, really I’m not sure if I even heard him say it or if I just expected as much. Someone let dude know that the mainstream ain’t got shit to do with the quality of his music, only how many units of Burglaritis might get pushed.