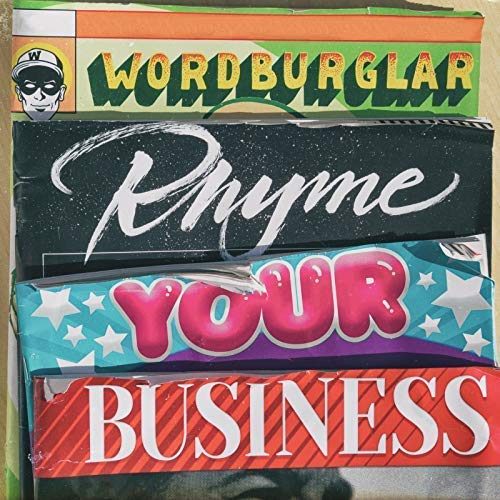 Sean Jordan is the beneficiary of a happy coincidence. I recently made a trip to South Dakota to cover fights for MMA Mania and it turned out that renting a car would get me the exact same business deduction as driving my own. I got a standard size Toyota Corolla (my fat ass doesn’t fit in an economy car) that had a lot of features my own ride doesn’t, including a digital dashboard with a rear view camera and a Bluetooth control panel. Knowing I’d be able to stream music from my phone wirelessly, I synced up whatever happened to be on my hard drive at the time to have enough tunes for the trip out and back. The random skip function was as much or more of an adventure than the drive — one minute I’d be listening to “In My Feelings” by Drake and the next it would be “Drawings With Words” by Wordburglar.

That road trip had me thinking about the fact I hadn’t a new studio album from Word since 2015, and as if Mr. Jordan was reading my mind an unsolicited copy of “Rhyme Your Business” showed up in my inbox a couple of days after I got back. The thing I dig about the Halifax rapper is that he’s sincere in his passion for things I used to get mocked for enjoying as a kid, like G.I. Joe and comic books. That sincerity alone wouldn’t make him a nice emcee, just a dude I could relate to, but thankfully Word backs it up with clever punchlines (though he occasionally overdoes it), a large lexicon, and a pleasant vocal tone and flow. It’s more likely than not a coincidence that rappers from Halifax who achieve some level of notoriety are dope, but then again when a Canadian hails from the capital of Nova Scotia they’d better be fresh to go against the larger scenes in Montreal, Vancouver, Toronto, and so on. Ironically enough it’s like one of the fighters I covered – if you’re going to be the best wrestler in South Dakota, that’s a great accomplishment, but you’d better be EXTRA GOOD so you can dominate your comp outside of it once you go to the next level.

“Rhyme Your Business” does not include the ode to Halifax above, but I chose it as representative of his pride and where he comes from, not to mention the fact the album itself is too new to have any videos out. Speaking of videos, “Rental Patient” explains a concept that may be unfamiliar to today’s streamers – going to the local Blockbuster (or similar chain) to pick out VHS movies to rent. My late friend David and I used to do this every single weekend in college and given it’s been a year since he passed this song is a rather eerie trip down memory lane (but a fun one all the same).

“What you know about goin out, to catch a movie at your own house?
Waitin in line to watch somethin on your own couch
No doubt, you had to get up and get it
Or ask an adult if your pick was restricted
And get this – I know it’s hard to believe it
but if a movie was rented, you just couldn’t see it!
None to download from your humble abode
You’d have to leave your home bungalow and run down the road
Hope the local shop had a copy in stock
cause if not, gotta find something else to watch”

Wordburglar freely admits to his tendency to “Barter In Nostalgia,” but for me it’s a trip to see how many things we have in common despite growing up almost 2,000 miles apart. Clearly being isolated from the larger hip-hop meccas didn’t impede our love for the arts either, as his enthusiasm comes through loud and clear in duets like “Damage Control” with Esoteric and “Input Blitz” with Mega Ran. The expected crew of producers return to rock with Word on this album including Fresh Kils, Timbuktu, Mister E, Coins and Beatmason among others, while DJ Irate and Uncle Fester provide the scratching. Even though that occasional tendency to overdo punchlines can be heard on tracks like “Make Fun Not Bore” (he quickly drops “just trying to focus like havin ADD at an eye exam” and “(w)rapping more words than an Amazon shipper” back to back) the lighthearted nature of his delivery makes it more playful than obnoxious.

To bring this full circle “Living Between Wednesdays” sounds to me like a sequel to “Drawings With Words,” complete with the stereotypical nerd asking the shopkeeper for the comic books he wants. The odd thing is that we both now live in an age where comic books have gone mainstream, Marvel movies make billions at the box office, and there are more new adaptations on Netflix than I can keep up with. I suppose it’s all for the best to not have to feel like an outcast, but being a socially awkward nerd can do one of two things for you – trap you in your own shell or harden your resolve to succeed no matter what people say about you. I don’t necessarily get the sense Word was picked on or bullied for his love of comics, but I do get the sense that growing up hip-hop helped give him an outlet for his frustrations and artistic impulses, which is why I always look forward to hearing his latest offering.