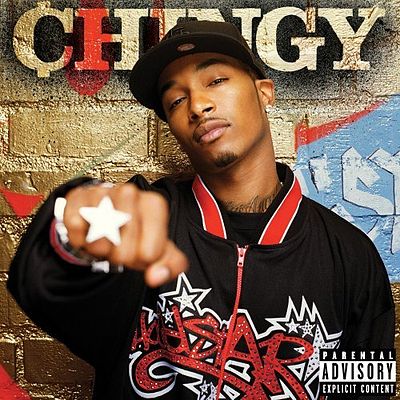 If one is inclined to be ¢ute about this sort of thing, ¢hingy does like to spell his name on the ¢over of his album with the ¢ sign. As for this reviewer though just plain Chingy will suffice. Let’s leave swapping letters for symbols to the original rappin’ pimp from Oakland himself, Sir Too $hort. Chingy is starting to build up a legacy though; he’ll need another twenty years worth of albums to catch up to Todd Shaw but at least with “Hoodstar” he’s on his third when many people suspected he wouldn’t make it to two. His debut album “Jackpot” was not critically acclaimed – in fact a lot of critics outright accused him of ripping off Nelly due to similarities in their style and accent. Having a hit single called “Right Thurr” with the emphasis on the St. Louis style URRprobably didn’t help matters. Nevertheless Chingy persevered and released a second gambling influenced album, this one entitled “Powerballin’.” Once again despite lackluster reviews the album was a moderate success. If you’re Capitol Records you might as well double up by going all-in again since Chingy hasn’t lost for them yet.

“Hoodstar” attempts to win by upping the ante right from the jump. The lead single “Pullin’ Me Back” is everything you’d want from a crossover hit. Jermaine Dupri laces together a quiet storm groove with “Rain” excerpts and the sultry singing of Tyrese Gibson. The selling value of Tyrese to a female audience can’t be underestimated since he’s a former fashion model besides being an above average crooner, which means even those who might be turned off by more thugged out or misogynistic Chingy topics will still swoon for this tune. For his part Chingy keeps it mellow and sticks to the subject so the song needs little to no editing for radio or video airplay:

“Even though I’m on the road doin shows
I made time for me and her relationship to grow (grow)
They tell me don’t trust the woman in this industry
But she not any woman, more like a sacred friend to me
Plus when I’m outta town always think of huurr
Might conversate with some chicks, but no one come above huurr
I thought I was ya man, guess you ain’t understand
And now I’m sittin here lookin crazy like DAMN”

Guest stars and production are a staple of this album. Three 6 Mafia produce and appear on the melee inspiring anthem “Club Gettin’ Crowded.” Mannie Fresh does likewise to help Chingy profess his love of footwear on “Brand New Kicks.” Would you be shocked to find that Jermaine Dupri also pulls double duty on “Dem Jeans” or that Mr. Collipark does too on “U a Freak?” Probably not. In fact the only guest who has done tracks that didn’t produce his own on “Hoodstar” is Fatman Scoop on “Let’s Ride.” Oddly enough Timbaland did the beat for the slick Lil Jon-esque “Let Me Luv U” but doesn’t appear on it vocally or receive a credit on the back cover – he’s only in the liner notes. Timbaland is rarely ever that low profile. The slickest track however may be from the relative unknown Poli Paul, who creates a slick Southern groove you’d expect to hear Big Boi or Bubba Sparxxx flowing on. Midwest City guest stars on this track and certainly doesn’t hurt the mix.

Besides holding it down with heavyweight producers/guests, Chingy raises the stakes again by including a bonus disc of “Chopped and Screwed Remixes” that enhances both new tracks on this CD and his older hits like “One Call Away” and “Holidae In.” If that weren’t enough, copies sold through Best Buy even come with a download code to get you a free bonus song entitled “I Can’t Hate Her.” All of these things don’t change one basic fact – he still comes across much of the time like a less charismatic Nelly. In fact at this point he’s probably pushing the St. Louis accent gimmick way harder than Nelly is, considering the album includes both “Nike Aurr’s and Crispy Tee’s” and a track that exhorts women to throw their “Ass N Da Aurr.” You can call it silly if you like, but you can’t say that Chingy hasn’t found a niche and laid fucking DEEP in its cut. As such I suspect “Hoodstar” will be another successful album for the man with pennies in his name, regardless of critical acclaim. He’ll keep on reppin’ St. Louis to the death and you can’t fault him for that.