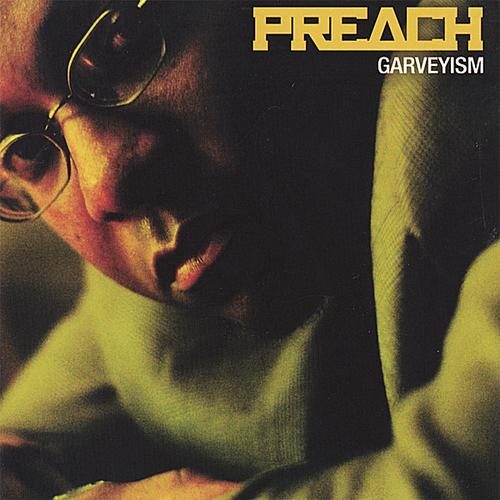 With such a heavy-sounding moniker and album title, you’d expect Preach’s new album “Garveyism” to be a healthy dose of politics and revolution. And you’d be mostly wrong. Despite his curious name, Preach does little actual preaching (unless you mean in the sense of “preaching to the choir,” the choir being fans of laidback Hip Hop), instead concentrating his raps on telling us what it’s like to be him on any given day. As for the “Garveyism” title, I am honestly at a loss as to how it directly applies to this album. Aside from the numerous African silhouettes featured in the CD booklet and frequent shout outs to his people all over the world, there is little explicit mention of any of Garvey’s teachings, unless you count Preach’s general sentiments of upliftment and self-sufficiency. So no, Preach is not here to urge thugs to put down the guns and drugs (even if he himself doesn’t prescribe to that lifestyle), and he is certainly not here to advocate a return to the motherland. Decidedly less ambitious but possibly more satisfying, Preach is simply here to tell us what his world is like. The finished product is not nearly as glamorous as Ghost’s crime sagas, nor as compelling as Cage’s abusive confessions, but it is a refreshing (albeit occasionally mundane) look into one man’s life and thought. And everyone who digs the groove is welcome.

“Garveyism” kicks off rather slowly with “Sunday Morning (Intro),” which sounds like it could be an E.Badu instrumental outtake with its meandering rhythms and lack of urgency. At one point Preach tells the soundman to “tone it down a little bit,” and one wonders how that is even possible, seeing as this is already the ideal soundtrack for a lazy Sunday morning, the ones where you don’t even get outta bed before two. In many ways this intro sets the tone sonically for the rest of the proceedings, as “Garveyism” uses enough dusty electric organs, funk drum loops and other neo-soul elements to fit comfortably next to The Roots’ “Things Fall Apart” or D’Angelo’s “Voodoo.” Most songs pass in and out like a gentle summer breeze, full of subtle warmth, and so a certain cohesiveness ensues as each track adds to the overall laidback tone. Even up-tempo numbers like “Dance” and “That Feeling” feature enough worn-in-the-groove basslines and plinking keyboard noodlings to ground them primarily in dusty soul, despite the frenetic drums.

Like I mentioned earlier, Preach seems most often to talk the talk of politics, but not walk the walk. Early on “Revolucion (Start Button),” he spits “I’m a humble dude/ I want freedom/ and damn it you should want it too.” This simple sentiment sums up much of the more political rhetoric found on “Garveyism”: well-intentioned and heart-felt but seemingly too simplistic and cursory to give any real instruction or knowledge to the unaware. Hell, I don’t mean to hate on a cat that is trying to kick a positive message. Maybe it’s enough to simply suggest and expose certain philosophies of thought, to get people curious, rather than extrapolating them in detail and risk losing much of the audience you wish to enlighten. If so, Preach does a fine job of sprinkling his LP with some knowledge, while still keeping it true to himself as a man and artist.

Specific highlights of “Garveyism” include the lazy-but-effective wholesale jacking of Stevie’s “You Got It Bad Girl” for the sweet “Believe;” the interplay of booming bass and delicate keyboard loop on “Woulda, Coulda, Shoulda;” and the specific nostalgia of “That Feeling,” in which Preach manages to be both fresh and universal with his remembrances. Not-so-highlights are found in the bland inspiration of “I Can Fly;” the calculated attempt at club play with the generic bounce-track “Take 5;” and the occasional overall tendency of Preach to use metaphors just a little too stale and conventional for my liking. His flow is occasionally forced, and his vocals lack a certain presence. In short, Preach never really attacks or destroys or even dominates a track, he just inhabits it (at his best), or occasionally gets lost in it (at his worst). Which is putting it too harshly: there’s a bunch of sweet and soulful sounds to be found on “Garveyism,” just as there are dozens of pleasing lyrical entries to fit them. The only issue is that revolutions are rarely if ever so pleasant. So if you’re looking for a soundtrack to your insurgency, wait for the next Immortal Technique album to drop. But if you enjoy Hip Hop that grooves like life grooves, slow and deliberate and satisfying, then peep “Garveyism.”