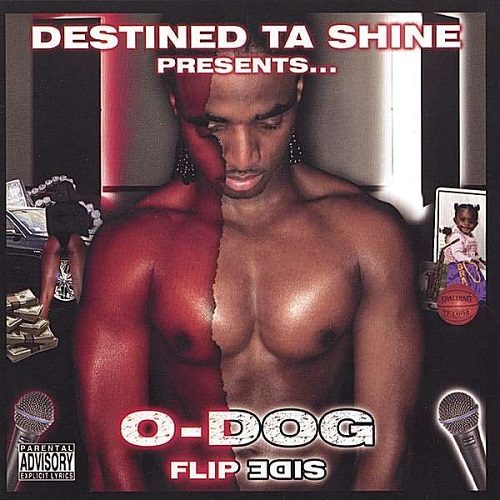 There are some things in hip-hop I doubt will ever lose their spirit. The supernatural harmony of baby grand piano keys banging alongside a Primo drum loop, the satisfaction of an unearthed Wes Montgomery sample, the crackle of vinyl before the beat drops. But there are far many more things that have already lost their charm, the whole “tightest motherfucker you never heard” gimmick being one of them. If you’re so hot ta fuckin’ trot behind the M-I, then why go and say somethin’ like that in the first? Anybody who advertises that shit up front already loses marks, and I don’t care WHAT you come with after that, ’cause if you claim to be the best, expectations are set to a height surpassing “Illmatic.” Who wants that kind of burden, ya dig?

Mississippi’s O-Dog makes this specific mistake several times on his debut, “Flip Side,” but I’m going to forgive him. Why, you ask? I don’t know, maybe ’cause I had a good day, maybe ’cause I’m having what alcoholics might like to call a “moment of clarity.” Allow me to hop off of Tarentino’s nuts for a moment and continue. O-Dog comes right out of the gates with a lot of stuff we’re all familiar with. “You don’t know me,” he says early on, but to his credit, that is partially true. A battle rapper with a southern drawl is certainly rare, but still not the most shocking anomaly. Where him and buddy J.J. Spade DO fair surprisingly well is in putting together a legitimate club record without losing too much lyrical credibility, an art quite literally nobody has mastered.

Don’t get me wrong, there’s still plenty of nonsense, “I get so much ass, motherfucker think I own a goddam donkey farm” being a line not beneath O-Dog. If it were intentionally funny, it might work, but with the amount of times he references his own genitalia, such jokes would get old fast if Dave Chappelle were telling them.

What O-Dog really has going for him are his energy and confidence (which might just be mistaken for arrogance if you aren’t careful), and an ability to come correct on “keepin’ it real” cuts. “Real Shit” sounds like it should be another thug clone, but O-Dog makes it his bitch. “I’m sorry I ain’t been shot 158 times,” he opens the track with, an obvious stab at a certain thick-necked gozillionaire. What follows is some real-ass shit, in the form of some private details O-Dog lays down for you. He’s a young father, hustling his ass off to cut a deal, and struggling to pay the fucking bills, and that’s real.

O-Dog is at his finest gushing his personal battles, otherwise, “dawgs for life” and “don’t be playing” songs are a thin order to spread over eighteen tracks. Whatever type track it is, even as cookie-cutter as “Make it Jiggle,” he rarely steps on his feet, as streaky a lyricist as he is. He definitely has his moments, making you smile on the intro for “Do U Wanna:” “I want all you to clap your hands. When the claps come in, bitch, not now.” Some of “Flip Side’s” best and most light-hearted moments are courtesy of J.J. Spade, who spits hotter fire than Dylan ever could on the closer “On Everything I Love,” and wins funniest line of the album on “Make it Jiggle:” “Two reasons why they hit it from the back, ’cause yo ass is so fat but yo face ain’t all that.”

It might sound like a knock, but it’s actually a good thing that O-dog’s writtens sound forced on most of “Flip Side.” When he’s keepin it real, he keeps it real, but when he’s not, “my style’s tighter than ant pussy” is really pushing it. Musically, it doesn’t help that most of Lil One’s beats are like Chinese water torture, but forgiving brutal repetition, many of these backdrops could blaze any club up. O-Dog has potential; he’s an animated emcee who questions the played out. The trouble is that he isn’t above abusing some of that same ol’ same ol’ we’ve had enough of.