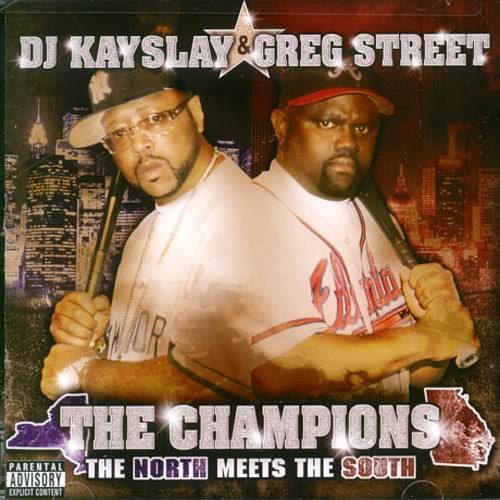 Shaq must really love rap, as that’s the only reason I can see him not giving it up completely by now. He’s tried time and time again to put out a successful solo album, but has never had more than novel success. Fresh off an undeserved NBA championship (Yeah, I said it â€“ The Mavs were robbed), Shaq is back to give the rap game another try. This time around Shaq stays mostly behind the scenes, only showing up on 3 songs. In a smart business move, Shaq decides to put up the money and let others take care of the music. DJ Kay Slay and Greg Street seemed to have called in all possible favors in putting together “The Champions” and end up with a mixtape that has more than a few bangers.

The album is subtitled “North Meets South,” but it should be titled “Papoose Meets South, Three Times.” For the most part all the east coast rappers stick together on tracks and all the southern rappers do the same. The only instances when an east coast rapper appears on a track featuring a southern rapper is when Papoose is the guest, which happens a total of three times. So expect North/South unity only on paper. The tracks themselves range from obvious album throwaway tracks to dope bangers. The producers are mostly up and coming but tend to do a better job than the established producers. Cool and Dre contribute a throwaway track on Remy Ma’s “One and Only,” where they simply add soft drums to a soul loop. DJ Paul and Juicy J are also in bad shape on “Hood Drug Warz” where they drop an instrumental that sounds better suited for their earlier underground tapes.

The rappers themselves never go above the usual street bravado and attempts at commercial success. Busta Rhymes’ lengthy flow on “Go Off” ain’t bad but definitely not the best he’s put out. Papoose, Remy Ma, and Hell Rell’s individual verses on “The Hardest Out” aren’t bad for battle verses but the track itself sounds like one long advertisement for their respective albums. “Pop The Trunk” is a certified banger thanks to Yung Joc’s knack for putting together catchy verses. Papoose’s flow on the track sounds awkward as he refuses to switch up his flow, but Chamillionaire saves the day with his usual charisma and upbeat flow. “Drama Gang” features Dipset at its worse, which isn’t pretty. “Live From The Block” is another dope southern track with Mike Jones and Paul Wall delivering at their usual quality, love it or hate it. Papoose once again sounds out of place on the track. Shaq’s first appearance comes on “Can’t Stop The Reign 2006” which also features Bun-B and Papoose. The beat’s old school vibes fare well for the track and Bun-B tears up the opening verse. Papoose sounds better here as his straightforward flow fits the track. Shaq himself is back with a more refined flow, but it doesn’t mean he’s a good rapper especially when he rhymes “B-I-G” with “B-I-G” twice in a row.

Lloyd Banks’ two minute contribution to the album wouldn’t have been all that bad had it not featured only 1.5 minutes of music. “In The Ghetto” is the type of posse track that could be destined for success with Fat Joe, Jim Jones, Cassidy, and Sheek Louch dropping verses. The track’s problems arise when army brat Shaq decides to contribute his “ghetto story” and when Fat Joe declares “now it’s 2005” a year too late. “5 Deadly Venoms” is what “In The Ghetto” should have been as Ghost, Rae, Kool G Rap, and Big Daddy Kane all drop verses. It’s almost the perfect lineup, but Lord Tariq is thrown in the mix for some reason. The last noteworthy track comes from the unlikeliest of contributors as Attlas drops “7 Days A Week.” You can throw in your best Mike Jones interpretation at this point (Who?!). Attlas was actually featured on MTV’s Made in the same way C-Ray Walz was, he was hired to teach a wannabe rapper how to flow. At the time I wasn’t impressed but didn’t have much exposure to him. “7 Days A Week” is a simple track but features a funky and smooth beat, catchy hook, and heartfelt rhymes.

“The Champions” is a bit better than your average mixtape. The sound quality is upgraded so that earns it some points. In terms of a real mixtape, meaning not just a collection of the top 20 songs out, it delivers more dope tracks than would be expected. The tracks themselves never rise above the usual street tales and battle verses, but if you want raw rap they do the job. Of course, if it wasn’t for Shaq funding the project you really couldn’t tell the difference between this and other $5 offerings you find at your mixtape vendor. Shaq himself could never carry an album and he seems to be the only member of DEJA 34 records at this time. With an actual roster of talent, Shaq could definitely impact the rap game considering his capital but as it stands “The Champions” is little more than a glorified mixtape with star power.