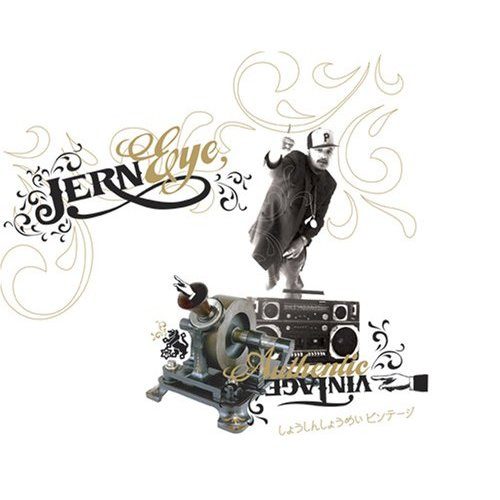 It takes confidence to step outside of a collective the public perceived you to be a part of to present yourself as an individual. That’s what Jern Eye does with “Authentic Vintage,” through which he’s not only looking to establish himself as a solo artist, but also as a producer. At age 27, the Los Angeles-born member of the Bay Area’s Lunar Heights crew should have acquired the necesssary knowledge to prevail in both fields. Musically, “Authentic Vintage” is hip-hop at its most versatile. “Skate” sees him sliding across a polished track by DJ Vinroc, spun forward by discoish strings. On “Power Animal” his flow bounces nicely off a bare-boned Nick Andre track. And D’Nae’s “You! (Mojo Music)” should satisfy any audiophile, its pulsating bass stabs and sparse drum clacks distinctively evocative of cutting edge club material.

The rest of the production is handled by Jern Eye and Phil Jahns. Despite the drum programming sometimes being limited and bassdrums replacing good old fashioned basslines, “Authentic Vintage” evades the all too common homemade appeal of underground hip-hop. Many tracks give off a professional showroom shine while retaining the natural structure the album’s title promises.

Lyrically, Jern Eye leaves the strongest impression with his verse on “Copacetic,” a cut he shares with the soft-spoken Spear of the Nation. Phil Jahns laces a beautiful, percussive track that digs deep into ’70s funk and whose expanding boom recalls earlier Solesides material. On his only verse, Jern manages to present his state of mind in a nutshell:

“…West and 37th
Those the days, summer heat with my brethren
Every face on the block ever etched in
Some’ll make it, some a different direction
Some live at forced intersection
Not housin’, stuck forever benched in
Poverty-stricken; fuck the election
None of those dudes my reflection
Matter of fact, they all keep switchin’
Ain’t nothin’ changed and y’all keep bitchin’
What to do, man, we all on a mission
What’s yours? Mine’s to keep livin’
Spiritual war and the enemy’s religion
No offense, but y’all keep bickerin’
And the top dog is still a middle man
And y’all keep fightin’ for that positionin’
Keep that, I’ma run with the little things
Live life and appreciate the simple things
CafÃ© au lait, my girl gigglin’
a pen and a pad and no riddlin’
Gore-Tex when it rains in the winter and
no stains when I unlace my Timberlands
It’s all good as long as y’all keep listenin'”

That verse doesn’t just – in a good way – sum up what Jern Eye is about, it also relays more about him than many of the other tracks, most of which indicate that Jern Eye is, first and foremost, full of himself. Nothing wrong with that as long as a rapper is able to give flesh to his day dreams. In Jern Eye’s case, that would mean that a song like “Insight” (admirably supported by singer Noelle Scaggs), should look beyond hip-hop, especially when he says about himself, “Everything said to me is never taken light / when it deals with what’s inside and what’s right.” Ultimately, Jern Eye’s album lacks content that is not to be taken light.

The ego trippin’ takes a break on the flirty “Phone Tag,” whose silly “You like my raps, hey yo, I like you back” sums up Jern’s carefree relationship with women, and on “What They Say,” which manages to be more than a “Just the Two of Us”-type tune, offering Jern’s opinion on how we can all get along:

“Communication, ways of education
That’s why I listen, your words so amazin’
Every phrase of mine a dedication
dedicated to make it a better place, and
Man woman and child could be adjacent
facin’ problems like divorce and hatred
(…)
Gettin’ my cake up in times of break up to make up
Too many lies men, women like to make up
Deception for lust, it all takes up
Wastin’ my time, wastin’ yours and your make-up
Either tears or smears from us in lust
No love and trust, then there is no us
And I don’t wanna be the one you’re versus
become your enemy, the one that curses
I don’t want rumors between your friends
between my friends, we could all be friends”

A lot of the tracks on “Authentic Vintage” lean right into the Souls Of Mischief pocket, but next to SOM’s eternally fresh rap styles Jern Eye remains somewhat static. He’s got a clear diction, a relaxed flow and a youthful voice that enable him to claim, “We the future, you stuck with old rhymes / a breath of fresh air, yours is coalmines.” But from top to bottom Jern Eye is rarely truly f-r-e-s-h. He’s got lyrical talent, but lets it go to waste on unfocused writing, painfully apparent on “Power Animal,” an early showcase of his fill-in-the-blanks steelo.

Jern Eye is the type of rapper whose “One of these days I’m gonna be one of the greats” begs for a simple, straightforward “I don’t think so.” Admittedly, that’s a highly unfair projection into the future on my part, but that’s how I overreact countering wishful thinking with what I consider to be the cold, hard truth. The kid’s heart is in the right place, no question. He tries to be a positive figure in a negative world. A superhero of sorts, “like Neo plugged into the system, dodgin’ bullets and darts (…) X Man battlin’ sentinels (…) jumpin’ into brawls and comin’ out clean / jumpin’ into bars with a hot 16.” But he wears his hip-hopness on his sleeve when the garb is too thin to protect him against more trying conditions. Battle raps and braggadocio are only seemingly fail-safe where only the strongest survive.

However, this is not an album where you tell the reader that there’s always the production to fall back on. “Authentic Vintage” is a quality recording that despite some momentary lapses works as a whole. Devoid of commercial cooler-than-thou beats, the album dares to be different, whether it harkens back to earlier days with an almost bashful use of a “Nautilus” sample (“Combat”), whether it tones down the anthemic atmosphere of the title track with a basic drum set, or whether it relinquishes a third verse in favor of an extended flute solo (“Copacetic”). Finally, the Lunar Heights group effort “Just Enough” closes off the album in grand fashion, lyrically adding welcome social relevance.

If you’re a regular reader of music reviews like this one you might have asked yourself before whether these writers would actually buy any of the stuff they cover. Although I am not a hundred percent convinced of “Authentic Vintage,” this is definitely a case where a retail copy will replace my promo, because all things considered I know I’ll get my money’s worth.