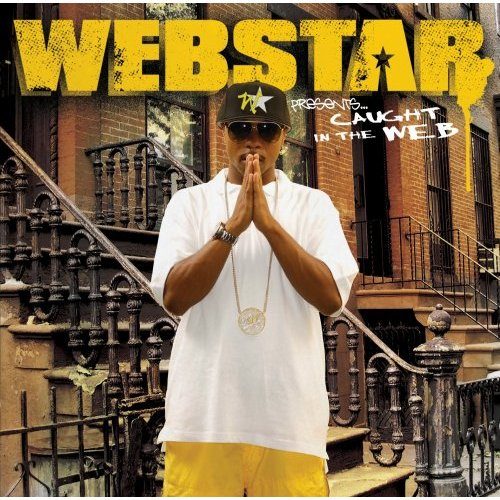 “Includes the smash hit Chicken Noodle Soup. The dance rage in Harlem!” I’m not going to deny that’s at least a possibility. After all I don’t live in New York and wasn’t aware of the Harlem Shake until folk were already doing it in music videos, but honestly I’ve not only never heard of this dance I’ve never heard of Webstar. This is one of those new albums that gets national distribution, is in shrinkwrapped stacks 20-deep at every store you hit, and just confuses the hell out of you – who the fuck is Webstar? If there was a publicity blitz on Webstar before “Caught in the Web” was released, I missed it. If there was a video for “Chicken Noodle Soup” on BET, MTV or MuchMusic to push the single, I’ve never seen it. If you have to go to someone’s promotional website to find out who they are AFTER buying the album, that’s not a good sign. The worst part is their “About” page on their site comes up totally blank in both Explorer and Firefox. Even their parent label Universal Records has a blank page when you’re trying to figure this shit out. How does an album get this much distribution with this little information?

So here’s what I can figure out. Webstar is apparently the male lead and the “DJ” of the project and I THINK he’s the one rapping but then again it seems at times like he lives up to the “Presents” part of the title with a rotating cast of guests Chaun Don and Cashflow. The most consistant and regularly appearing of the guests is a cute little shorty named Young B (she’s in all the publicity photos too, so you’d think she’s half of a group called Webstar) but it’s probably not worth getting excited even though she looks fly in that Fisherman hat. I’m guessing she’s underage and that Webstar is too, because the only links you can find to them doing shit on either website is that they’re did some sort of promotional appearance on the TeenMusic.com website last week, probably to promote the album’s release. What’s even more telling is that there’s no “Parental Advisory” sticker on the album cover either outside or inside the shrinkwrap. If those two things didn’t peg them both as not being old enough to legally purchase beer or alcohol, the final nail in the coffin is that whenever it seems like some even MILDLY profane cursing might take place it’s quickly edited into silence, such as on “Like This”:

“You say you smoke me no problem
{Nigga} I had cake since Ma$e lived in Harlem
I ain’t been robbed yet, still on my job yes
I can park a Phantom in the middle of the project
[…]
Them {niggaz} ain’t gettin it, them {niggaz} is liars
Twenty-fo’ inches just be sittin on the tires
And the only time I wasn’t thinkin ’bout gettin my bread
when I was gettin some {head}, gettin gettin some {head}”

Ridiculous. There are only two reasons this album could be censored this heavily – either they’re really hard up for the Wal*Mart distribution or this really is a rap album for people under the age of 14. Once you’ve heard the “smash hit” song “Chicken Noodle Soup” you’ll be inclined to agree. Let me make it clear I’m not knocking Webstar’s hustle – there’s a lot of money to be made selling rap albums to the young, especially in Western countries where kids often have a lot of disposable income, but they’ve so clearly bracketed themselves into a young demographic here that there is absolutely ZERO chance this will Kris Kross-over. There’s not any hint of anything deep about Webstar or Young B in this song. The lyrics are beyond just being simple or easy to follow – they’re nursery rhyme level:

So you’re reading this review and thinking “even a six-year-old can tell that’s retarded – maybe the beat is what makes this a SMASH HIT.” Hate to say it but no, that’s not the case. A producer who goes by the name The Drizzle lives up to his billing here – his beat doesn’t even come down hard enough to make one single person wet with sweat. It’s a simple drum and kick with claps and an air-raid siren repeating over and over in the background. Even if you’ve never used Pro Tools a day in your life you could make something more complicated and interesting than this. I presume the only thing they’ve got left going for them after all this is a really complicated and cool looking dance since it’s “the rage in Harlem” but since I’ve never seen the music video I can’t comment on it. The funny thing is that every other hip-hop dance fad has been backed up by great music – you like the song so you do the dance, not the other way around. I can’t help but feel there’s some sort of marketing scheme behind this whole thing which in this writer’s case failed miserably.

Here’s the long and short of the story here – “Caught in the Web” is full of simplistic beats and inane raps pretty much from start to finish. A couple of songs try to break out and become interesting here and there – “In My Video” and “Fresh” both have slightly dope beats thanks to Ron Browz and Chaun Don respectively, but that’s all they’ve got going for them since the raps make fellow Harlemite Ma$e seem like a lyrical kingpin by comparison. In fact I wish I had bought a Ma$e album instead of “Caught in the Web” because this was one of the biggest wastes of $13 I ever spent on a review. My advice is that despite the fact you’ll see this album in the rap section of every store you visit, avoid it at all costs unless you enjoy throwing money away on nothing more than I do.