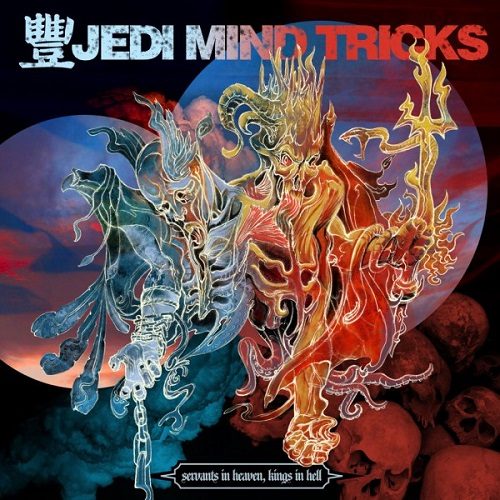 The words “cult following” get thrown around quite liberally these days. When you can apply the same term to the Branch Davidians of David Koresh and the devotees of Paris Hilton, the whole notion of what “cult” is starts to lose meaning. To break it down like an organic compound though, “cult” traditionally refers to any group of people whose beliefs are not accepted by mainstream society. To those who consider themselves part of said mainstream “cult” is a perjorative, but to those bonded through adversity and oppression because their beliefs are hated and scorned “cult” can describe a willingness to stand up for what you believe against the odds. Therefore a “cult following” could be considered a group of people who respect the beliefs of someone outside the mainstream and will stand up for him or her, even against those who would censor their views by any means necessary, legal or illegal.

There’s no question that on this basis it’s apt to say that Vinnie Paz and Stoupe the Enemy of Mankind have a cult following. Collectively known as Jedi Mind Tricks, this rapper and DJ duo have been outside the mainstream for virtually their entire career. In fact the title of their first LP “The Psycho-Social, Chemical, Biological & Electro-Magnetic Manipulation of Human Consciousness” was so damn long it’s a wonder the album could even fit on any retailer’s shelf anywhere. Nonetheless JMT have persevered over the years, despite little to no radio play and a fanbase that is either unable or unwilling to expose what’s so great about albums like “Visions of Gandhi” to a wider audience – unwilling because they like to believe they’re in on an exclusive secret, and unable because Vinnie Paz writes such brutally vicious raps that there is zero chance they’d ever find mainstream acceptance. Jedi Mind Tricks has always thrived on pairing that brutality with Stoupe’s beautiful beats, resulting in an experience that is as mesmerizing as any of Cypress Hill or M.O.P.’s greatest hits. One thing’s for certain on “Servants in Heaven, Kings in Hell” – Vinnie Paz has not toned down the rhetoric nor is he likely to any time soon. Take this excerpt from “Put ‘Em in the Grave” for example:

“Yo, roll the dro and spark, a bunch of animals like Noah’s Ark
A rapper so ill, my flow just stole Jehovah’s heart
My fist’ll break a fuckin boulder in half
When I was young, I’d smack a stick off of your shoulder and laugh
I’ve chosen a path, spoke on my emotional past
Spoke on everything from war to how the ocean is vast
My flow is too fast, you can’t contend with me there
Or it’s gonna be a massacre, Tiananmen Square
My pen is prepared, and so the guns and the swords
And death the only thing you get for fuckin with lords
Been stuck in some wars, but Vinnie fought his way out
The double jab, right cross what they caught in they mouth
I’m callin ’em out, anyone who fuck wit my fam
Thinkin’ that they got away and they was lucky, then blam
Buck ’em and scram, don’t use the shotty no more
They didn’t think that Vinnie P was catchin bodies no more”

Consider that this is the second track of the album and the first full song on “Servants in Heaven, Kings in Hell” and it’s pretty obvious Vinnie Paz is indeed still catching bodies. The musical opening implies the passionate singing of Enrico Caruso is about to burst forth, but the menacing vocal growl of Paz will not be mistaken for an operatic tenor. Some would argue that Stoupe is turning a beast into a beauty, but in fact it’s the exact opposite and for all of the right reasons. It’s that deep feeling of furious anger and abiding hatred in Vinnie’s delivery that is so wonderfully cathartic, and Stoupe’s beats allow you to get swept up in his passion. While Mobb Deep has worked hard to transition their music into the mainstream, Vinnie goes the opposite route and almost gleefully flips you the middle finger, daring you to like him as he pledges his allegiance to two and only two things – his fam and his music – and if you’re not part of either he’ll politely invite you to fuck off. Still want to roll with the Jedi Mind Tricks? It would be a shame if you didn’t, because you’d miss out on haunting songs like “Razorblade Salvation,” as Vinnie proves even lyrically murderous MC’s have feelings too:

“Mommy, I’m sorry if my first letter made you cry
To be honest with you, I don’t think that I want to die
Sometimes I feel like that I’m cancerous in other’s lives
That’s probably why I drink at night and sleep ’til four or five
It’s kind of hard walkin through life with my distorted eyes
When I was younger, I was stupid and I thought I’d thrive
I thought a lot about everything I said in the letter
And questioned whether or not if I was dead, you’d be better
You think my shorty would be happy if I never met her?
It’s too late now, mommy, I could never forget her
Could never forget how she taught me to love
Cause my father and my grandmother is always above
It’s glory above, you know that daddy taught me to thug
And every time we was with nanny she’d bombard me with hugs
Damn, I miss her mommy, and it’s hard to believe
That I’m grown and I don’t understand it, why did they leave?”

This song is about as as close to being a “positive MC” as Paz will ever get, although it’s a very perverse sort of positivity given the song’s title and the fact that throughout the song Paz is deciding to live with pain instead of commiting suicide. Paz finds darkness in even the lightest of Stoupe’s beats, but Stoupe perhaps shines the brightest when he revels in the darkness with his Jedi Mind cohort. “Uncommon Valor: A Vietnam Story” featuring R.A. the Rugged Man is as creepy and hair-raising as hip-hop gets, and Stoupe ups the ante by sneaking in subtle sound effects that make you feel like you’re right there in the jungle. “When All Light Dies” has Vinnie bragging about how sick he is, wanting to “thug it out like the Israelis and Iranians,” but the most thugged out thing here is Stoupe’s multi-layered approach to building beats – a whistling backdrop, some sped up singing, a low but prevalent bassline and banging drums melded into a deadly melody that builds up each verse to a chorus powerfully sung by Shara Worden. The Jedi Mind Tricks aren’t the only ones who find “Serenity in Murder” – the hip-hop fan in you will too after DJ Kwestion’s scratching Stoupe’s deadly mixture of beats, almost as deadly as Paz’s line that listening to his raps will have you “fallin like you Owen Hart.”

That’s Vinnie Paz for you – even when you try to get with his program he’s going to say something to offend you sooner or later. Still it’s not hard to respect the architect though because he’s an equal opportunity offender, and there is a purity to be found in that honest inability to take sides or play nice. Vinnie Paz is what he is with no apologies – an obviously intelligent man, perhaps even a tortured soul if you will, but one who dwells in his own demons because given the choice between “Servants in Heaven” and “Kings in Hell” he’d rather choose the latter. As long as he and Stoupe keep making songs like “Heavy Metal Kings” and “Outlive the War” with Sean Price and Block McCloud, who can argue with him? If Vinnie Paz is going to hell, at least he’s paving the road there with a catalogue of rap songs that will be legendary when he’s long gone. It’s soaked in blood, smells like gunpowder and as vivid as a mushroom cloud that wipes everything in it’s path off the map, which is what makes “Servants in Heaven, Kings in Hell” both so brutal and so beautiful. Embrace the darkness if you dare.