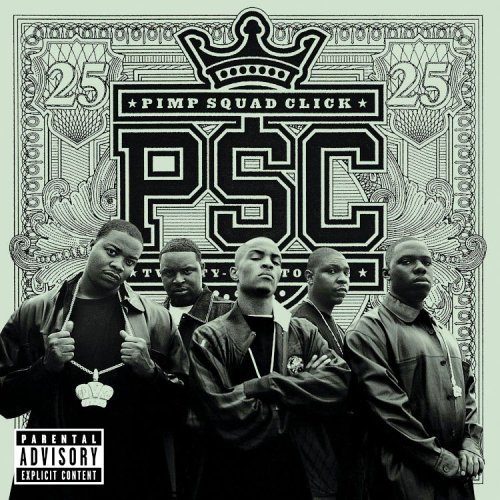 Looking at their abbreviation you might not realize you’re familiar with this rap family, but the Pimp Squad Clique gets more shoutouts in T.I.’s raps than Lil’ Kim and Foxy Brown give Manolos combined. On their own they weren’t very well known though before grabbing the opening song on the soundtrack for “Hustle & Flow.” With a boom bap beat by Lil Jon and a gutter rap by T.I. to set it off at the start, the song instantly became a headknocker rocking trunks and headphones coast to coast:

“Now, e’rybody wanna be the king of the South
When, they ain’t runnin a damn thing but they mouth
No doubt, it’s all good, y’all just statin y’all opinion
But in the South and in the hood it’s understood without sayin
It’s a given, and ain’t because of what I’m doin for a livin
It’s, mo’ because of what I do and how I’m livin
Not to mention when I’m rappin I’m just hurtin niggaz feelings
(Niggaz feelings) And still chillin on somethin that’s into healing”

Artists that comprise the Pimp Squad Clique include T.I. himself as well as Big Kuntry, Mac Boney, C-Rod and AK. Now to be perfectly honest they’re anonymous to me – I don’t even know which one did the third verse of “I’m a King” (somebody will probably e-mail me after this review and say who). Therefore my first interest in “25 to Life” has to be the beats; after all, if they don’t hold the weight how is a crew of rappers nobody is familiar with save for their leader T.I. going to get over? That’s essentially the chief problem fellow ATL-ian Ludacris had with his Disturbing Tha Peace release – the beats couldn’t hold them up even if they did hold it down lyrically (and they didn’t).

Tony Galvin gets things off to an acceptable start on the lead song/title track. It’s not musically daring, but the drums and bass levels keep things moving alone nicely. DJ Montay’s “Westside” is less impressive though. The music is a poor imitation of a Lil Jon track, and the constant gunshots make you think you’re listening to a DJ Whoo Kid mixtape. By the time Galvin comes back for “Fuck Where Ya From” featuring Young Jeezy, you’ve already come to the realization that the latter is more talented than anybody in T.I.’s Clique. They love to make a lot of noise about not liking lames, calling niggaz bitches, and proclaiming that anybody who doesn’t draw a pistol as not real. I always thought being real was fighting man to man, whupping ass or taking an ass whupping (in my case more of the latter) without weapons, but such is the state of values in a lot of today’s more mediocre rap music.

And make no mistake about it, the Pimp Squad Clique are mediocre rap music. In fact I honestly feel that even the much maligned Nelly could completely shit on any rapper in this group both creatively and lyrically. The music continues to imitate Lil Jon throughout on songs like “Do Ya Thing” and “Still I Luv Her” and continues to imitate all the cliches of hardcore gangster rap on songs like “Lookin’ Shife” and “Murder Game.” The lone moments of inspiration tend to be when much more worthy guests drop in, like the soulful Cee-Lo on one of Galvin’s nicer tracks “Walk This Way.” This may prove Galvin is a better producer than he shows on this album, and it’s just because he’s working with such generic thugs that he produces so much generic thuggery. Still there’s little redeeming about the Pimp Squad Clique save for their founder, who just proves here that he’s better served on his own than in a crew. It’s sad to see people making the same mistakes, but if Southern MC’s didn’t learn the lesson from Ludacris putting people on just because they were friends or hung out with him in the studio, maybe they’ll learn from T.I. I’m not even saying individually some of these rappers might not be fresh but collectively they’re dead in the water. Pass on this one.