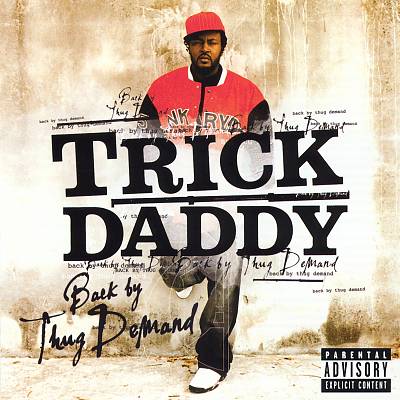 Trick Daddy :: Back by Thug Demand

I “Bet That” a lot of y’all out there were not aware Trick Daddy was releasing a new album this December. I “Bet That” a lot of y’all aren’t down with the original Dade County thug and don’t give a shit even if you did know. I’ll even “Bet That” you haven’t heard the first single yet, produced by The Runners, co-starring Chamillionaire and Goldrush. Know what else? It’s a safe “Bet That” Trick Daddy is gonna smash the charts with this one whether the haters like it or not.

“Everyday me and my dog we whylin
Seven-trey, seven-five, dope ridin
And we ain’t trippin on nuttin, just vibin
Big nine with me cause them fuck niggaz try me
They already know, how I let ’em go
Kill his ass and make sho’ at his funeral
How the hell a O.B. gon’ try me?
I’m O.G. on and off TV, see
Middle fingers in the air, tell ’em fuck y’all
Tryin to hate on my dawgs, hell fuck naw
Why you hatin on a nigga like that
Why you tryin to stab a nigga in his back
I know some niggaz don’t like this
But them niggaz is the reason I’m like this
Fuck niggaz done made me mad
I’m ’bout to snap and put this K on his ass”

That’s Trick Daddy Dollars for ya, unapologetically thug yet he still “luh da kids.” Don’t believe that’s true? Well as if he hasn’t said it enough times on his albums he even has a Trick Luvs Da Kids Foundation. Seriously. You can front on Trick Daddy all you like but you can’t front on the fact he’s been increasingly successful over his last six major label releases and is now back with his seventh. That’s seven deep for a rapper many people thought was a one trick pony when they heard “Nann Nigga” or saw a goofy looking website on the cover of his album “www.thug.com.”

Everybody wants to dismiss Trick as a gimmick or a fad, but he’s still here thuggin’ it up in 2006. Not surprisingly on “Back by Thug Demand” he’s more than ready and willing to dismiss the jealous and the haters. On the Kane Beatz produced “Tuck Ya Ice” he says it simple and plain: “My shit is platinum, these assholes wearin white gold/Jones mobbin these cars, nigga all my shit paid fo’/And why should I rent a house, when I can buy it and write it off?” Coming from a lot of other artists such bold proclamations of wealth might ring false, but you can “Bet That” from Trick Daddy and song cohort Baby that they’re telling you the real. You can also “Bet That” when Trick says he was “Born a Thug” on the Goldrush produced track he means it, and the dark keys and heavy bass back it up. Is Trick Daddy gonna blow up the spot “Tonight” with Trina and Jaheim over a Gorilla Tek beat? “You Damn Right,” and that’s a fat track too. If Trick Daddy and Young Buck give it to you “Straight Up,” there ain’t no bullshit on it.

Now to be fair it’s hard for Trick Daddy to keep up this kind of momentum for eighteen straight tracks, and guests like International Jones and Young Steff can’t help him out on “Lights Off” or “Chevy” respectively. Trick Daddy’s trying to give back some of his thug wealth, but you know what they always say, you can’t make chicken salad out of chicken shit. If Trick had cut a few of the lesser tracks and lesser guests “Back by Thug Demand” would be more cohesive as a whole and keep the focus more squarely on his thick Floridian drawl and rap style. Trick is a thug to the fullest, but he’s not tatting Thug Life on his chest or trying to be the second incarnation of 2Pac. He may be a “Thug by Demand,” but that demand is generated entirely by his own charisma and popularity, not on anybody else’s coattails, which is exactly what causes his fans to “Demand” more and more of his shit. One thing’s for sure – you can “Bet That” his fans will be satisfied with this CD.