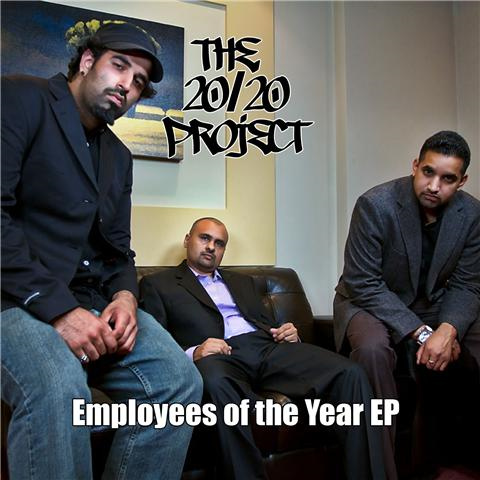 The 20/20 Project is a Canadian hip-hop group based out of Toronto and consists of three members: D-Squared and Idrees hold down the microphone, while DJ Unknown mans the turntables and takes care of the production. in fact, The 20/20 Project’s existence basically begins with DJ Unknown. Both D-Squared and Idrees worked the Canadian underground scene, with D appearing on two Tru Paz albums, while Idrees released his own albums and mixtapes, developing a small-but-loyal fanbase in the process. While working on their own projects for digital singles and mixtapes, with the mutual aid of DJ Unknown’s production, D-Squared and Idrees collaborated on each other’s solo tracks and decided to take their chemistry to the next level by forming The 20/20 Project. The intent of this collaboration is to blend social commentary and conscious vibes with old school boom bap hip-hop.

The old school boom bap part of that desire is fulfilled from the opening track, as the first voice on “Back to Work” is not that of D-Squared or Idrees, but rather Erick Sermon, as DJ Unknown lifts a sample from EPMD’s “So Whatcha Sayin” to form the backbone of the song. Lyrically, both emcees hold their own and stick with the premise of getting on their grind and separating themselves from the wack emcees. “Complicated” shines light on the rappers who chose to switch up their styles and in a sense sell their souls just to attain a small piece of fame. The track is brief, but it doesn’t end before DJ Unknown cuts up some songs by Eric B & Rakim, Gang Starr and De La Soul. “Explain This” is the standout of this EP and provides some safe social commentary here as 20/20 asks for an explanation for everything from the abundance of violence and commercialism in hip-hop to childhood obesity (especially when “there’s a McDonald’s on every street corner”). The EP closes out with remixes to “Rules To The Game” and the opening track, “Back To Work.” The “Work” remix swaps out the bass guitar of the original in favor of some high pitched brass, which neither adds or takes away from the track.

Spanning over a meager fourteen minutes or so, The 20/20 Project achieves what it set out to do. Boom bap? Check. Social commentary? Check. Conscious vibes? Check. We don’t really have a chance to see if the emcees can keep the attention of a prospective listener for the length of an entire long player. So for the moment, we’re left with an exceptional EP effort…it’s not hot garbage and not necessarily pure gold either, but it works for now. While 20/20 don’t really do enough here to win the “Employees of the Year” award outright, they’ve done well to get themselves noticed and may be lucky enough to earn some sort of consideration when the time comes to choose the finalists.