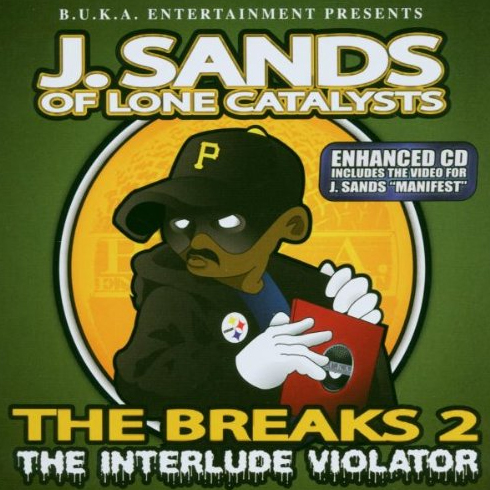 Many know J. Sands from Lone Catalysts fame, a super duo (with J. Rawls handling production) famed for back-to-basics hip-hop as heard on the underground classic “Hip-Hop” and, after a long 4-year gap, its stellar follow-up “Good Music.” As well, the group has pursued several side-projects, both solo and compilation, materializing into J. Rawls’ “Essence of Soul” collection, “Essence of J. Rawls” and “The Liquid Crystal Project.” Not one to be idle, J. Sands has also dived into other hip-hop ventures and came up with, first, the “Bringing it Home” compilation, then “The Breaks” series. While the first part in this series was an ode to nostalgic jams sampled by other prolific hip-hop artists and where Sands simply wanted to rap over interpolations of old school gems, the second, “The Breaks 2: Interlude Violator,” is a more creative and risquÃ© barrage of those instrumentals featured on hip-hop albums that served to bridge the gap between full-length songs. Creative in the sense that it’s something all heads have probably thought of doing, but never actually gave it any serious or practical thought; risquÃ© in terms of the fact that it would be foolish to think that long-time fans of the original instrumental would willingly accept someone else rapping on those beats that were, perhaps, destined to be and perfect as just an instrumental.

Thus, the Pittsburgh emcee walks that thin line and lends his vocals to chopped-up samples that used to be only interludes. And, for the most part, he succeeds. Interestingly, he enlists the production talents of lesser known beat-makers including Blackology, O. Bangaz, the ARE, Imiani R. Thomas, and J. Sands himself. The quality of music is evident right off the bat with the strong drum-line, horns and guitar loop of “The Interlude Violator,” an introduction explaining what Sands is looking to do with this LP, and flows directly into “Straight to da Point” â€“ a smoothed-out hip-hop “love” ballad that asks why waste time when he already knows what he wants. Additionally, J. Sands does not only jack interlude beats, but song concepts too, as he takes some time to acknowledge Slick Rick on “The Moment I Feared Pt. II,” this time detailing, in part, a run-in with a cop, a theme revisited on “Police are Your Best Friend” and this time utilizing that most amazing interlude which originally introduced us to Pete Rock and C.L. Smooth’s “The Basement.” Here, the melodic drums are accompanied by a police siren throughout the song while AKA assists Sands in discussing the threat posed by your city’s finest.

Sands allows his boys to rep on “North Side Raiders” â€“ a posse cut about whatever that flows well over an elongated version of that short Premier beat intro to Group Home’s “Supa Star.” Sands flexes his trademark use of the “r” sound on this cut and rips one of his better rhymes on the album: “I’m like Jay hold my gun bust it horizontal/ Catch a body like Gotti, then to Toronto/ Switch my passport, I ask for a spic Cubano/ Speaking English with an accent like Rick Riccardo.” The track then cuts into what is the best beat on the album, entitled “No Samples Cleared Revisited”: a self-explanatory cut featuring a seriously amped-up version of Pete Rock’s interlude to “T.R.O.Y.,” but with harder drums and bass to back it up. Unfortunately, the beat drowns out Sands’ lyrics, but no matter. The mellow, un-chopped use of 9th Wonder’s add-on beat to that musically divine Little Brother track “The Way You Do” sets the backdrop to Sands anti- rap beef song “Keep My Name Out Ya Mouth,” while the Pharcyde’s introductory instrumental on their first album laces Sands’ discussion on “Counting the Chips.”

Ultimately, on this album, the theme of jacked interludes is the real story and provides for a most interesting listen. While some instrumentals are best left in their original form, others featured in this set are made better by the chops used and other add-ons put in. However, while it does for the most part, oftentimes the music cannot cover up the repetitious and un-exciting lyrics that Sands provides. It would have helped greatly to have featured more descriptive and story-telling tracks like “John Dough” where it seems Sands really excels; yet, even though he does his best to change his flow (check the intonation dips on “A Likkle Story” for example), there still seems to be something tiresome and tried about his style that rarely has this author seeking to press rewind. It doesn’t help that the album contains 17 songs; truly, a shorter, more concise LP consisting of the best beats and samples would keep the listener from being bored. And, perhaps, Sands would have benefited from a better interlude selection: I cannot help but think about Premier’s instrumentals on the first two Jeru albums, or the ones available on albums put out by Show & AG, Madvillain (is there a rapper that can handle “Sickfit”?), Jaylib (that beat closing out “Starz” with those MOP adlibs), and the list goes on. Pick your own and see if you can match up to Sands’ Interlude Violator â€“ a definite head-nodder.