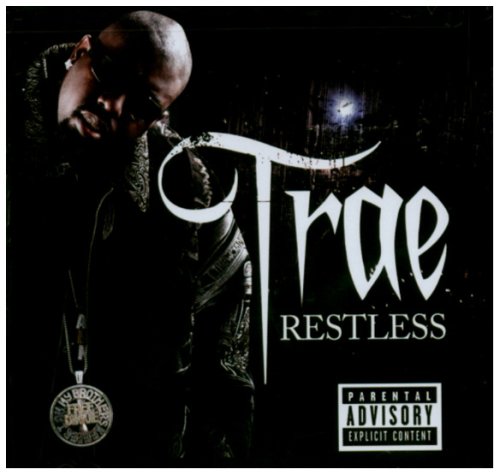 To say Trae is something of an underground favorite is a little bit of an understatement. The prolific rapper has at least six albums under his own name, almost a half dozen more as part of S.L.A.B. (Slow Loud and Bangin), file several under the group Guerilla Maab, a duet album with Z-Ro and a bunch of mixtapes. You could spend several weeks just trying to track down every album he’s done or been affiliated with, although RapReviews has already covered two of them: 2004’s “Losing Composure” and 2005’s “Same Thing Different Day.” Despite one writer being from the Frozen North of Canada and the other being from the Dirty South of Texas, they both ultimately came to the same conclusion – Trae’s dope, sho’ nuff. They evaluated him as a success as a storyteller, especially when paired with the right beats to compliment his smooth Texas flow. I’m often told by readers of RR that they use our reviews as a guide to which albums they should buy and they’re not the only ones who feel that way; I often make purchases based off the reviews I read right here on the site and felt convinced by the above coverage that Trae’s “Restless” would be a good investment of hard-earned cash.

It’s safe to say both Nin Chan and Pedro ‘DJ Complejo’ Hernandez provided good advice here. From the opening strains of the dark and moody “Intro” it was clear “Restless” would be a cut above the ordinary. Trae is a self-described “Asshole By Nature” but if anything his lyrics prove otherwise, as they are surprisingly introspective and contemplative. The Scott Novelli produced title track, also featuring Young Noble of the Outlawz, is an ideal example:

“And I’m cool but I don’t know who to trust
Even my lady flipped the script for bitch-ass niggaz with lust
Wish I was stress free
But since I ain’t, I gotta kick it where the rest be
Keepin it real’ll make you where the best be, test me
That ain’t no good out dere cause some say I’m an asshole
Whether they like it or not I’m gon’ get to see my grass grow”

It’s the combination of soulful beats (in this case sampling from the “Overture of Foxy Brown”) and Trae’s distinctively deep and dark voice that creates musical harmony in your ears. Trae’s dealing with the everyday struggles on his tracks, and presents a side of the hustle that’s not as glamorous as you’d find it to be in most music videos, which may be why he continues to be underrecognized in the rap world. You definitely won’t see him bling blingin on a somber cut like “The Rain”:

“I wish this life’d get better, but everyday it’s like I’m wishing for nothing
But still I’m walking like I’m proud, and keep it G when I’m strutting
It’s been a long road, watching everything unfold
I’m 24 and still alive, so I respect what I’m told
Some days I wonder who might go through, what I go through
Where every other day, some motherfucker think they know you
Come here nigga let me show you, that money don’t change a thang
The only thing that change, is how quick your partnas’ll bust your brain
I’m so use to seeing it rain, I give a fuck about the sunshine
I’m adapted to pain, that’s why they feel it when I spit mine
It’s anger when I spit lines, I remember what it was and where I’m coming from
I started from nothing, that’s why I’m glad I made it out the slums
But that ain’t do nothing, but change a nigga address
Same old drama same bullshit, same old stress
I’m well acquainted with the rain, so way too much that I ain’t seen
Yeah I’m still below the possible, it’s fuck you when I’m dreaming”

Shit gets deep around Trae’s way in Houston, but that doesn’t mean he’s completely incapable of enjoying a FEW of the fruits of his success. The pounding Johnnie Jones bassline of “Cadillac” is tailor made for bumping in any car of your choice, even though the chorus advocates breaking up with whatever foreign whip you own first and getting down with GM’s own luxury line. Three 6 Mafia and Paul Wall guest on this song but they simply can’t steal Trae’s shine, as it’s his album and his show here:

“I woke up, thinkin foreign car
But the Cadillac, got a nigga sitting in a daze
24’s and a swiss, sitting sideways
Trae flipping through the hood, like I’m running through a maze
Find me trunk up, with the top back
One deep in the front, two freaks in the back
Haters mad at me, cause I’m MVP stats
[…]
Me and Paul Wall, in a slab out of Texas
In a Cadillac, had to get rid of the Lexus
Rather be gangsta, tippin on somethin
With somethin in the clip, that’ll get rid of the plexin”

Trae does at times tiptoe the line between being innovative and regurgitating already familiar themes of Southern rap, but whenever he’s in danger of getting stale the beat or his flow change up and provide an unexpected twist. “Real Talk” is one of the fastest raps I’ve heard South of Chicago and has a guitar laden track like nothing I’ve heard anywhere else. Q-Stone mellows out the backdrop on “Dedicated 2 U” and lets Trae spit some real talk about his fam. Trae also makes effective use of guest stars throughout the album, featuring Lil’ Keke on “Screw Done Warned Me,” Bun B on “So Gangsta,” and even the crooner Mya on “Matter of Time.” It is perhaps appropriate that the album’s finale “Pop Trunk Wave” features Fat Pat, which is itself a testament to a rapper from the South who is underrecognized and who sadly was murdered before he could even see his albums become underground classics. Let’s hope it doesn’t go the same way for Trae – he may be “Restless” about the lack of shine he gets but as long as he keeps making good albums good things will come his way.