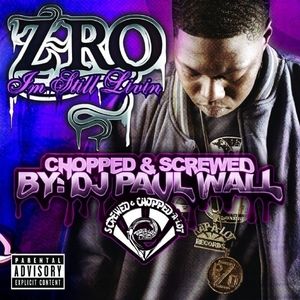 Prophets of the Dirty South often preach the value of Z-Ro, the greatest Texas kingpin you’ve never heard of. Unfortunately pleas to pay heed to his word and deed often fall on deaf ears. In the Lone Star State and his hometown of Houston in particular Z-Ro is acknowledged as an all-time great on the level of Nas or ‘Pac, but almost no one anywhere else in the U.S. is on his jock. Sadly Joseph McVey himself is partly to blame for this sad state of affairs as any time he drops a stellar album like “I’m Still Livin” his ongoing legal problems and trips back and forth to the pen make it hard as hell to promote his music career. Doing battle with the laws is great for your underground cult celebrity status as an anti-hero but without the kind of paper that puts F. Lee Bailey on your defense team things will not “Continue 2 Roll” smoothly in the mainstream.

“Can’t even ride through the hood no mo’
Without police pullin us over looking for ounces of dope
Just cause I’m black and got diamonds on my gold teeth
Ain’t enough evidence to say I sold a quarter ki’
But even still, that’s the way it is
And the main reason homes are broken, and baby mamas shed tears
And have to raise they kids one deep
In and out of relationships lookin for a man so people pardon creeps
But what I see is just a soul trying to survive
The main reason why d-boys hustle with twenties and dimes
Lil’ mama I feel yo’ pain tryin to get ahead
Don’t let that be the reason fo’ 24 hour open legs
I know life is hard nosed
Will we ever get our forty acres and our mule, only God knows
Ain’t no love seem like it ain’t gon ever change, this world we live in is cold
Hit my gin and juice and then I continue to roll”

As smooth as this song was on the original version of “I’m Still Livin’,” the DJ Paul Wall “Chopped & Screwed” treatment on this re-release of the CD really puts Z-Ro’s words into focus. McVey is one of the fastest tongue flippers out of Screwston and while his clarity of diction puts him on par with Twista he still benefits from being slowed down, as does the smooth Spandau Ballet beat the song is based on. Unfortunately the “Chopped & Screwed” method of remixing albums is even harder to convey to those who don’t follow Dirty South hip-hop. You might be able to convince a jaded backpacker who only listens to records by El-P and Aceyalone that Z-Ro is a great lyricist but if you throw on the slowed up version in the truck suddenly you’re shit out of luck.

Paul Wall’s familiarity with the art of making these tapes result in a deft touch on the new edition of “I’m Still Livin'” that would not be possible in the hands of a hamhanded DJ. Wall takes the pitch down to a point that’s still musically harmonious, not turning the songs into a joke like a child playing with the speed control on daddy’s turntable. He picks the right words in verses and choruses to double up and repeat, adding the right emphasis to key phrases on songs like “T.H.U.G.,” “Keep On” and the Scarface tribute “Man Cry.” The album’s strongest screw mix though may be “No More Pain”:

“No more pain, I’m bout to overdose on it
I ain’t never had no good times, I put my dogs and my locs on it
Chain smokin cigarettes back to back
Unless I was pillow fighting with the kids, I miss that
But it’s a different day and time, and I’m all alone
With nobody to call my own, different area codes poppin up in my phone
Prolly just another hoochie searchin for some sex
It ain’t got nothin to do with me it’s all about my checks
If it wasn’t for the music you niggaz wouldn’t give me dap
Wouldn’t give a fuck about how I’m doin, it’s all about a rap
Realizing I ain’t nothin without paper and pen
So Lord forbid I get in a wreck like the D.O.C. was in
Let me make my mama proud, and she could see me
Cause heaven ain’t too far away from the ghetto, but touchin it ain’t easy
God, give me the victory and bring me out the rain
Give me something, to smile about and NO MORE PAIN”

Songs blend smoothly together from one track to the next, which is another important part of the “Screw” style – it’s like turning a hip-hop album into a one man mixtape. With “I’m Still Livin'” that mixtape fills up with some of Z-Ro’s great Southern contemporaries who were on the original version, meaning appearances by Bun B, Lil’ Keke and Trae among others. For those listeners who have had a hard time getting over the slowed down nature of the raps on a “Screwed & Chopped” mix, this album may be the perfect one to get your feet wet with.