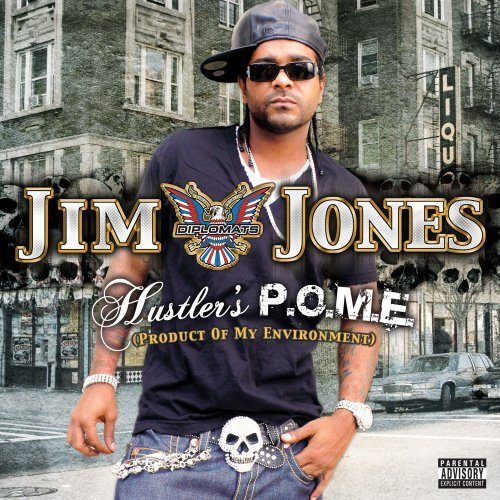 If you can say two things about the DipSet, it’s that their rappers are consistent and their fans are loyal; or is it that their rappers are loyal and their fans are consistent? Well DipSet definitely stay true to their fam, we haven’t seen anybody break camp yet and release an anti-DipSet record. They’re definitely consistent too since they seem to put out a new album every few months. It’s a little bit borderline to being overkill if you’re not a huge Diplomats fan, but not near to the degree No Limit was back in the day with 1-2 new albums every single week.

If there’s one rapper in the clique who exemplifies both consistency and loyalty and keeps their fanbase feeling the same way, it’s Jim Jones. Jones is a Harlemite who thugs it up unapologetically and knows how to mix it with just enough style to keep coming with crossover hits. The formula worked on “On My Way to Church” and “Harlem: Diary of a Summer” so why would Jones change it up now? Consistency. Jim Jones is back with “Hustler’s P.O.M.E.” and not only is he sticking to script, he’s sticking to the script WITHIN the script. To explain what this means one needs to examine the album’s first single “We Fly High”:

Jim Jones sets the example in the first two lines of the chorus, and then the additional female vocals of Karen Civil come in and copy him on the second half. The recursion goes deeper than that – “BALLIN” has become the new Jim Jones trademark and you’ll hear it again and again throughout the album, usually in a second track of vocals laid over the top of the beat and the rap that results in an extra phrase or word at the end of each bar. You know this technique by now, it’s how Diddy always has a “like that” or “uh-huh” or “we don’t stop” at the end of his lines. The longer you listen to “Hustler’s P.O.M.E.” the more of these inserts you’ll notice copying each other, but “BALLIN” is the most obvious and due to the widespread satellite and radio play of “We Fly High” the most recognizable.

The guest vocals tend to be consistent and repetitive as well. Max B is on each of the first three tracks – “Intro,” “So Harlem” and “Bright Lights, Big City.” You’ll find him on four more tracks throughout the album. Surprisingly one of the DipSet’s best rappers, Juelz Santana, only makes two appearances – “Emotionless” and “Pin the Tail.” The other consistent thing is the lack of outsiders on this release – the only notable name being Lil Wayne on the song “Weather Man.” Production is consistent too – slow, heavy, and menacing. In fact the production is so consistent it’s hard to tell the difference between a Chink Santana beat, a Big K.O. beat and a Joe Black beat. “Don’t Forget About Me” seems to have the exact same tempo and bassline as “Get it Poppin,” which in turn has the same beat and pound of “Weather Man,” and so on. The only tracks that really stand out by the end are the soulful “Concrete Jungle” and the crunked out “Get it Poppin,” although in the case of the latter that has as much to do with the female vocals by Jha Jha and Princess as the track itself.

There’s no reason to hate on Jim Jones for knowing what works and sticking to it. “Hustler’s P.O.M.E.” is not an album that’s going to advance the rap game lyrically or musically. Jones raps about how much he spends, how bling he looks, how fly his whips are, and all the things you’d expect him to say about the way a gangster rolls, “speeding through life like it’s no tomorrow.” He’s giving the DipSet exactly what they want and the fans exactly what they expect. Should people expect innovation and creativity from their music? Sometimes all you want is something familiar and comfortable. Jim Jones is like the McDonald’s of rap – you’re going to get the same thing the same way everytime, and if you like it that way then there’s nothing unsatisfying about what he has to offer. The “Hustler’s P.O.M.E.” is not to be mistaken for a “Hustling Poem” – for one that might be different from every other song on the album and for two Jones is actually abbreviating the phrase “Product Of My Environment.” Jim Jones is Harlem to the death, although one might think that around the corner from McDonald’s there just might be a Burger King.