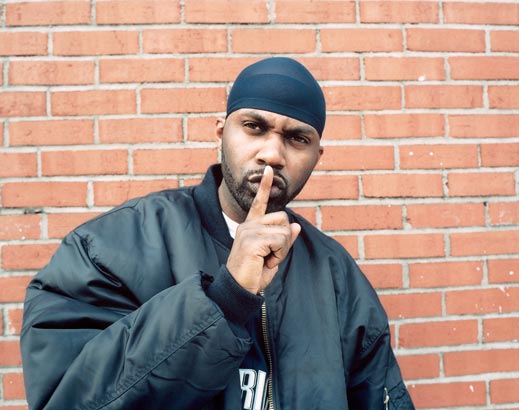 Shining amongst eight other distinct personalities would be a challenge for most, but not Masta Killa. The deep voiced MC was instantly noticeable on his first Wu-Tang track “Da Mystery of Chessboxin” and he continues to be a standout performer on every song he’s featured on to this day. Recently Masta Killa released his latest solo project Made in Brooklyn, and he sat down with us to talk about the record, how he developed his rhyme style, and why simplicity is sometimes the most important thing in life.

Adam Bernard: You’ve had some of the most memorable verses on some of Wu-Tang’s biggest songs, what should we be listening for with your solo work?
Masta Killa: Good music. Classic music. It’s hard to find really good music these days. It’s hard to find good music period, that’s why a lot of times we end up buying a lot of the old shit because it’s hard to find good shit that you can just put on and you can just listen to that shit straight fucking through without even wanting to fast-forward something, or you can’t really play that shit, even if you’re around your children, or playing it amongst children. There aren’t even really too many verses that’s said today as far as from MC’s or from Hip-Hop in general that you can say I can quote this shit and the shit is a fuckin banger, but you might still know Big Daddy Kane’s shit from ’88. That’s fuckin crazy to me, but they said this is Hip-Hop so how come you can’t quote somebody’s lyric to me right now like you can probably quote a Slick Rick lyric. You probably know “Lodi Dodi” like a muthafucker, but you can’t even quote nobody’s shit like that today. It’s like, why’s that?

AB: I always thought it was because I was getting old, but you may have a point there.
MK: Nah I think when things are what they are, to a degree of a family and a nursery rhyme, you never forgot your ABC’s or Humpty Dumpty or some shit like that. There’s certain things that’s just memorable. You wanted to hear it that much that you can never forget that shit. Those are songs that made you want to rewind.

“I definitely want it to be a memorable album […] something that you can put on and just want to rewind that shit.”

AB: And that’s what you’re going to give us with your new record?
MK: That’s what I strive to give you every time I write anything. When I bring myself to the table that’s what I strive to bring and with a solo project, having the opportunity to bring another part of myself, I definitely want it to be a memorable album, just like Long Live the King or Mahogany, something classic, something that you go back to, something that you can put on and just want to rewind that shit. It wouldn’t be what it is without the supporting cast that’s around me, of course. My family first and foremost because that’s the foundation, and it’s really a Wu-Tang album. If you love that I think you will love Made in Brooklyn.

AB: After being in the game for over a decade what do you feel is most impressive about your career?
MK: I’m most grateful and blessed to be here and still be considered to have the opportunity to do great things in this business, in the Hip-Hop community, period. LL has a voice that’s been blessed, and a career that’s been blessed that’s opened up many different opportunities for himself, he’s been around for years and that’s a beautiful thing when you can say that. I’m saying I have been blessed with that opportunity and I still think I have so much more to offer to the game. I feel like Hopkins, forty somethin still whoopin young niggas asses.

AB: So what are some of the things you still want to accomplish?
MK: It’s an accomplishment to me every day to wake up. It’s an accomplishment for every breath. I measure success by the little things in life. When it comes to this music I’m blessed to do it and I just want to continue to make good music that people can appreciate. As long as I can do that I’m pretty grateful with that.

AB: A handful of Wu members became solo stars, releasing multiple albums. What were the feelings like when some members were getting their second solo albums in stores while others were still looking to get their first out?
MK: That’s not what I was looking for. If I wanted to get an album out that was no problem. If you really wanted a record deal YOU could go get a record deal.

AB: It wouldn’t be the best of records.
MK: {*laughs*} That’s my family and it would have been selfish of me to look for individual success when this was division of my brothers, really, as far as Wu-Tang was concerned. They were already going to do what they were doing if I never decided to do Masta Killa. Wu-Tang was gonna be what it was regardless. I decided to take myself serious and apply myself to what was already being done and I was blessed to have that opportunity to study. And it wasn’t like I was in a wack group where I felt OK well damn, three of ya’ll niggas is wack, nah I was around eight talented brothers so really I was learning. I studied. It wasn’t no problem for me. When one brother had two albums out I was on both of those. If another had an album out I was there, too. So it was never like I was alienated from what my brother was doing I was always amongst my family. On every album I’m there.

AB: It sounds like since you came together as friends, and as brothers, first it’s a little bit different than if you had been an industry made group.
MK: Oh yeah, definitely because then that’s something totally different. There’s no bonding. I don’t know you, we’ve been put together, and without maturity, and a lot of us are young as a physical age when we come into this game, this industry, and without understanding of maturity and things of that nature, knowing the business of certain things, you can very well get twisted.

AB: What are some of the adjustments you have to make when you go from recording a Wu-Tang song to doing a solo joint?
MK: I learned from my brothers and I was more a fan of their voices, their rhymes, than I was of my own because I wasn’t taking it as serious, my style hadn’t matured to the styles that were around me at that time. I love to listen to them even more than myself.

AB: Well, a lot of people love to listen to you, you have a really unique rhyme scheme. Where did that develop?
MK: That developed because those are my eight big brothers. If you’re the littlest brother in a family with eight big brothers that’s crazy it’s gonna make you crazy cause you’re the ninth member of the family but you had to go through all these eight styles to develop your style so your style is really the eight but you’re the completion of the eight because you’re the ninth and everything goes through knowledge of all which is one to nine and then it goes back to one anyway. So I had to develop who I became to even exist within that cipher because when you think about being in the studio with eight individuals that’s crazy as MC’s only a person of a certain stature could come into that camber and be respected. That’s why you don’t hear too many MC’s rhyming with Wu-Tang, because damn they ain’t fuckin with that. But you will hear certain people come amongst because their wild styles are respected and ill and they’re ill themselves. Being in a family like that you have to develop, get your shit sharp.

AB: So of all your work, what’s been your favorite 16?
MK: My first verse. That was the first verse I ever really wrote seriously. I didn’t even have any format, I just had my thoughts down and GZA actually showed me how to format it, to flow it. “Homocide is illegal and death is a penalty / what justifies the homicide when he dies / in his own inequity it’s the master of the mantis rapture comin at ya.” That was my debut. I’m only on Enter The 36 Chambers one time and that’s on “Da Mystery Of Chessboxin.” That’s because that’s the only thing I had that was compatible to everything that was around me. They was DOIN this so they had mega shit, that’s the only thing I wrote that was compatible, that could even hold the weight of what was around me in the booth at that time.

“As a person I’ll learn from a baby. I’m thankful for life. Never forget that you’re a student to life.”

AB: We know your team influenced you in the 90’s, but who influences Masta Killa in 2006?
MK: As a person I’ll learn from a baby. I’m thankful for life. Never forget that you’re a student to life. When you know that you’re a student to life then there’s always room to learn something because knowledge is infinite. I keep it right there, that’s what keeps me grounded, what keeps me balanced. My grandmother gave me a jewel at a very young age and I had to grow to it, but she told me something one time and I never forgot it, she said “no matter how high a bird flies he has to come down to earth to get his food.” I thought about that shit for years. No matter how high a bird flies, it’s like you have the gift of flight and it seems like you’re so high but when it comes to the necessities of the realization that you have to stay grounded because everything is grounded, that’s the foundation that is knowledge. That was a beautiful jewel from my grandmother.

AB: You seem to have a lot of things together. Could you describe how you live your life? You’re saying how you can learn from a baby and you have the saying from your grandmother, so I’m wondering how do you lead your life where you end up such a sponge for knowledge?
MK: Simple. Simplicity is the most complex thing. So many people look outside of themselves for everything not realizing that everything that you’re looking for is really within because you can go out here and make ten billion dollars and have a mansion, have yachts, you could own the fucking country, you could be the president, but it doesn’t make you happy. And then you could have all that shit and not have anybody real, or somebody that you really love, to share it with. Then you could have all that shit and your dick don’t get hard. I’m just saying be thankful for the sight, hearing, smell, taste and touch. Be thankful for the little things and you can appreciate the big things in life.